With a whopping 27 years on the air, The Simpsons is the longest running scripted TV show in American history. During those 27 years, The Simpsons has found its way into just about every corner of merchandising, which of course includes my very favorite type of merchandise: action figures. Simpsons figures have been produced by the likes of Mattel, McFarlane, and even NECA, but the most successful, most popular line of Simpsons toys by far was Playmates’ World of Springfield line. Running from early 2000 through to 2004, the line managed to produce just about every named character from the show, alongside prominent variations of the main family, leading to over 200 unique figures produced. They didn’t stop with figures, though. One of the line’s main hooks was the recreation of some of Springfield’s more memorable locales as playsets. Each playset included a unique figure and had the ability to interact with most figures from the line. Today, I’ll be looking at Bart’s Treehouse and its included figure, Military Bart. 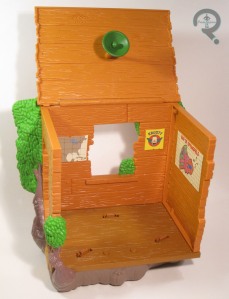 Bart’s Treehouse was released alongside Series 12 of the World of Springfield line, which hit retail in the spring of 2003. The first 10 series each got two playsets, but Series 12 was when the line was nearing its end, so Playtmates had cut back to one playset per series. The Treehouse is 6 ¼ inches wide, 6 ¾ inches tall, and a little over 4 ½ inches deep. It’s not really articulated in any really conventional way, but there is a hinge on the roof, allowing it to swing up for easier access to the interior.  The construction of the treehouse is fairly basic, but that seems about right. From the screenshots I’ve found online, it doesn’t look like a horrible approximation of the in-show setting. The basic detail work is actually pretty nice. The boards are all fully detailed, with nails and everything, and there are even a few spots for posters on the walls. The actual tree bit is decent, if maybe not as exciting as the rest of the house. The bark in particular is a little on the soft side. It’s also worth noting that the entire back of the set isn’t meant to be seen, so the leaves on the tree just abruptly stop. There isn’t a whole lot in the way of paint on this set. The tree bark is all painted a rather drab greyish-brown, which is appropriate I guess. The two maps and the Krusty the Clown poster are all done via decals. They’re pretty well applied and don’t look to be going anywhere, so that’s 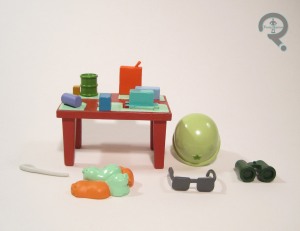 good. The rest of the pieces are pretty much just molded in the appropriate colors. It was a tiny bit of a letdown to find out that the bulb in the light fixture was just left green, but that’s pretty minor. In addition to the Bart figure (who I’ll get to in a second), the Treehouse includes a table (with assorted supplies on it), a pile of water balloons, and a pair of binoculars. The set also included the usual interactive feature of all the playsets in the line. There are three ports where compatible figures can be plugged into the set. By each port, there’s a button, which will play a random clip of dialogue associated with the figure on said port. The set is compatible with 51 figures in addition to the included Bart (though a good number of those are just variants of the main family), and there are over 25 unique phrases included. The sound quality’s nothing to write home about, but it’s a pretty novel little feature nonetheless. 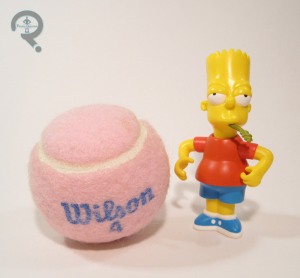 Included with this set is a variant of Bart Simpson, who was one of the more recurring characters in the line. This particular Bart is based on his appearance in the episode “Bart the General,” which had the Treehouse in it, so it’s a good choice. The figure is 3 ¾ inches tall and he has 4 points of articulation (the standard for the line). Overall, he’s a fairly standard Bart, with the usual orange t-shirt and blue shirt (which Bart will no doubt demand you eat). He’s in a fairly generic pose, aside from his arms, which he’s got held up and bent at the elbows, as if he’s doing the chicken dance or something. The head is the main distinctive part here: Bart’s eyes are in a more serious half-lidded position, and he’s got a bit of wheat sticking out of his mouth. He’s supposed to be serious and military, but he ends up looking a bit dopey. To aid with his military look, Bart includes a helmet, sunglasses, and a baton, all of which are pretty well sculpted and sit nicely on the figure. The glasses even cover up the weird eyes and make him less silly looking, which is good. Bart’s paintwork is overall pretty clean, with nice, bright colors, and no really noticeable slop. For the talking feature, Bart gets six different lines with this set: “I promise you victory! I promise you good times!”, “I ain’t gonna get out of the fourth grade alive”, “We are happy, we are merry! We gotta rhyming dictionary!”, “I’m gonna have to teach you a lesson.”, “There’s this boy at school who keeps beating me up.”, and “I can’t squeal. It would violate the code of the schoolyard!”

World of Springfield was all over the place when I was growing up, but the only figure I ever got was a Series 1 Bart. The playsets always fascinated me, but I just never got one, since I was a bit young for the show at the time. I was at a thrift store with my brother two weeks ago, and happened upon this particular set for less than half its original retail price. The box was super beat up, but everything was there, so I figured “what the heck?” This is actually a pretty fun set, and I’m glad to have found it. Of course, now I need to resist the urge to go back and pick up the compatible figures! 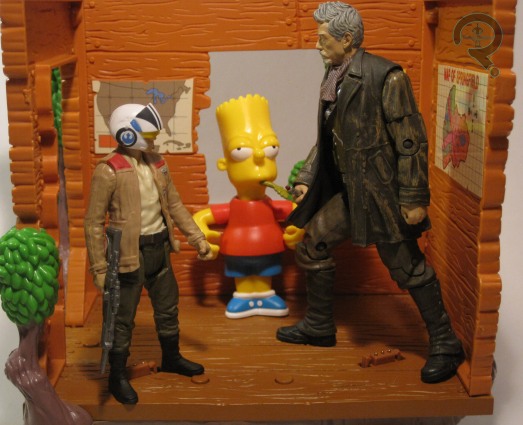