It’s Day 10 of the post-Christmas gift reviews, and today I’m getting back to a franchise that no special occasion would be complete without.  Yes, it’s time for another Doctor Who figure!  I haven’t reviewed anything Who-related since January of last year, if you can believe it.  That’s okay, I’m making up for it by looking at a particularly cool figure!  This one is yet another figure of the under-appreciated Eighth incarnation of the Doctor, as portrayed by Paul McGann (who slowly, but surely has become, like, my favorite Doctor).  Let’s have a look!

The Eighth Doctor is part of Character Options’ long-running 5-inch Doctor Who line.  While the line was supposedly abandoned in favor of the smaller 3 3/4-inch line, they seem to have kept is going, just a figure at a time instead of series by series.  Eight follows the current model, being a special single release, similar to the “Time of the Doctor” Eleven and the War Doctor.  The figure stands 5 1/2 inches tall (a little taller than his last figure, thanks to CO’s slowly creeping scale) and he has 22 points of articulation.  I really appreciate the steady increase of usable articulation in these figures, and this version of Eight really benefits from the extra mobility.  The last Eight figure was based on his appearance in the TV-movie, but this figure is based on his much cooler look from 2013’s “Night of the Doctor,” the short that showed Eight’s final mission and the origin of the War Doctor.  The McGann head included with the War Doctor figure was initially supposed to sort of bridge the gap between the first Eight and War Doctor figures, but somewhere along the way, CO realized that the NotD look and the War Doctor look really aren’t that similar.  I’m really glad they opted to release this look as a proper figure, because it takes Eight’s rather stuffy and sort of boring look and adds a nice flare of elegant adventurer to it, which really helps to redefine the character.  This figure’s sporting an all-new sculpt, which is very nicely handled.  It’s obviously very similar to the other Doctor Who  figures I’ve looked at.  There’s not a ton of texturing, but that actually results in a rather clean, and very consistent look.  He has some very nice fine detail work on the clothing, especially on the boots.  Seriously, I don’t really talk boots much, but those things are just a work of art.  The head is yet another new sculpt for Eight.  This one is definitely the best McGann sculpt we’ve gotten so far. The pictures don’t quite do it justice; it’s definitely one of those sculpts you need to see in person to truly appreciate.  The paint work on this figure is decent, but perhaps not as detailed as the sculpt deserves.  To be fair, the work is certainly very clean (perhaps too clean; Eight was a bit of a mess in the short), and the colors are all pretty good matches for the on-screen appearance.  The best work is once again the boots, which look quite lifelike and oh my god I’m talking about the boots again.  I swear, I don’t usually fixate on such things, but they’re just so nice.  Whoever was on boot duty at CO was on point when it came to this figure, that’s all I’m saying.  Eight includes the usual sonic screwdriver, the chalice given to him by the Sisterhood of Karn (which regenerates him into the War Doctor), and a bandolier.  Technically, he doesn’t put on the bandolier until after regenerating into the War Doctor, but who am I to complain about extra accessories?  Though, on that note, I wouldn’t have said no to a young War Doctor head, however unlikely that was.

Three guesses who I got this figure from.  First two don’t count.  Yep, this came from Super Awesome Girlfriend.  I’ve actually been eyeing this figure up since last January and ever so subtly (read: not at all subtly) bringing up that I wanted it when talking with Super Awesome Girlfriend.  I actually gave her a bit of a hard time on our anniversary when she gave my K-2 instead of this guy, since he would have continued the anniversary theme.  Needless to say, she gave me no end of (well-deserved) crap when I opened this guy up on Christmas morning.  I like this figure quite a lot.  I’d even go so far as to say it’s my favorite Doctor Who figure (though the War Doctor and Eleven give him a run for his money). 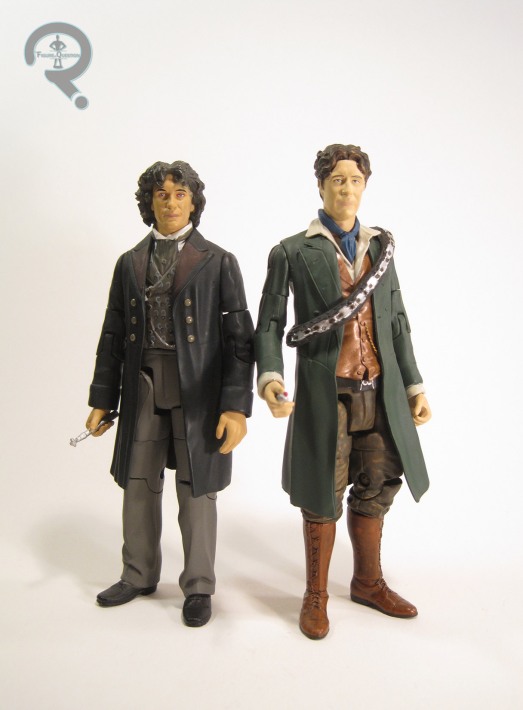