Here we are at the finish line for the 2016 post-Christmas reviews.  I’m ending things the way I finished them: Aliens!  It’s hardly the Christmas season without a good helping of Aliens merch!

NECA’s a company generally known for doing the “impossible” when it comes to action figure licenses.  When they started off their Aliens line, Hicks, Hudson, and Bishop were the only guaranteed likenesses, and Ripley was most definitely not on the table.  That is, until she was.  But NECA swore up and down there was no way we were getting a Newt figure.  Not only was the likeness not available, but her unique sculpt would make her less than realistic for the line.  No way she was happening.  Until she did.  Yep, during last year’s big Alien Day celebration NECA and actress Carrie Henn unveiled the Newt figure.  She was set for a SDCC release, which made some collectors a bit worried, but NECA assured fans that everyone who wanted a Newt would get one.  They finally made good on that promise, albeit in a slightly roundabout way.

Ripley and Newt were released as part of the “Rescuing Newt” two-pack, which is sort of the last major hurrah of the Aliens anniversary product.  It was originally supposed to hit in November, but was pushed back until right before Christmas.

While clearly not the main focus of this set, NECA used this as an opportunity to get the Aliens Ripley out there one more time, for fans who missed her Series 5 release.  However, for those of us that have been faithfully following the line, they made her different enough to not feel like a total repeat.  The first figure depicts Ripley towards the beginning of her journey into the hive, and this one depicts her closer to the end.  I’ve looked at about 90% of this figure twice before; she shares everything below the neck with both the Series 5 Ripley and the TRU-exclusive Kenner Ripley.  I loved the sculpt the first time, and I loved it the second time, and I still love it the third time.  NECA really nailed the details for this look, and I can hardly blame them for wanting to get as much milage out of these pieces as possible.  But enough about the old, what about the new?  Well, Ripley gets a unique head sculpt, which reflects her more dilapidated appearance late in the film.  The hair’s a lot more pressed to her head, the eyes more tired, and the mouth ever so slightly open, showing she’s catching her breath after kicking all that Xeno butt.  I gotta say, I was a little underwhelmed by the sculpt when I saw it in the package, but after taking it out and looking at it from a few different angles, I’e warmed up to it.  The Series 5 version is still my preferred look, and has the better overall Weaver likeness, but this one’s a solid runner up, and, if nothing else, fixes the minor issue of the neck looking a bit underscaled on the last two uses of this body.   As similar as the two may look, the paint work on this figure is also a bit of a change from her Series 5 counterpart.

The basics are all pretty much the same, but the stains on her clothes have definitely intensified from the last figure.  In particular, I think the sweat stains on the shirt look a bit more realistic this time around, which now that I’ve typed it out seems like a very strange compliment to pay something, but there it is.  My one complaint about the figure is something I feel certain is confined to my figure: they pupils are off center from each other, which makes her look a bit cockeyed from certain angles.  It’s not the worst thing ever but you can see it a bit in the shots here.  This Ripley includes the same flamethrower/pulse rifle combo from the first figure, but this time she also includes a nifty flame effect attachment, which is a nice touch that could have very easily been overlooked (it’s also compatible with Frost and Windrix’s flamethrowers as well, which makes it extra fun).

Let’s be honest, nobody was really buying this set for the Ripley figure (okay, that’s probably not true….)  The real star here is Rebecca “Newt” Jorden.  The set’s named after her and everything. This figure is a pretty straight re-release of the SDCC version (which is exactly what we were all expecting and what most people wanted).  Of course, I never got the SDCC version, so she’s all-new to me.  The figure stands 5 inches tall and has 26 points of articulation.  Her sculpt is a pretty solid one.  The face sports a strong Carrie Henn likeness, and the hair’s pretty not-terrible, which is quite a compliment when it comes to long, sculpted hair.  The body feels a touch too lanky to me, but it’s not like it’s really far off, just ever so slightly.  The incredible level of detail seen on the clothes more than makes up for it.  Everything’s got texture on this figure, and it really looks like she’s the character from the movie.  The only slight inaccuracy I noticed is that the tear on the right shoulder of her shirt isn’t quite as large as it is in the movie, and let’s be honest, that’s reaching pretty far.  One area where things could maybe be just a little bit better is Newt’s paint.  It’s far from bad, but there are a few sloppy spots, especially on the transitions from skin to clothing on the knees and wrists.  Her shoes are also not really symmetrical, with a lot of the paint on 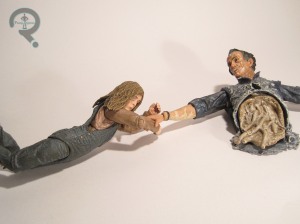 her left foot missing sculpted lines almost completely.  Of course, each foot is about half an inch in size, so it’s not like it’s the end of the world.  Apart from those issues, the work is generally pretty good, and she’s at the very least on par with Series 1-3 of the line, so she’s not going to stick out or anything.  The SDCC version of Newt included her doll Cassie’s head, Hick’s helmet (which she’s seen wearing in one scene), a flashlight (just like the one included with Bishop), and her citizenship award that the Marines get her name from.  For this figure, everything but Cassie was cut.  While the other extras were certainly cool, Cassie’s really the only essential accessory for Newt, and this way, those that spent extra money on the SDCC version still get a few unique items.  I mean, it’s gonna eat at me from now until the end of time that I’m missing those three pieces, but such is my life.

I had originally hoped to be able to get the SDCC version of Newt after the con, as NECA usually finds a few ways of distributing their exclusives, but for a number of reasons, they were unable to do that this year.  This was sort of freaky, because there was something of a delay between the SDCC figure hitting and NECA confirming exactly how they were planning on getting more Newt figures out there, and I almost caved and bought a marked up Newt more than once.  Fortunately, they finally announced this two-pack, and I was able to breathe a sigh of relief.  This set ended up being a Christmas present from my parents.  It didn’t actually arrive in time for Christmas morning, but it made it just a few days later, which gave me one last little burst of present opening.  Yay!  This is a pretty great way of not only getting Newt to retail, but also offering up another chance for people to get Ripley.  Both figures are strong additions to the line, and I’m beyond thrilled to add Newt to my collection (and, as an added bonus, now I’ve got an extra Ripley to pilot the Power Loader!) 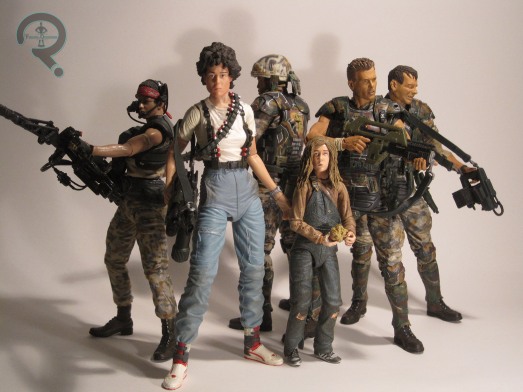