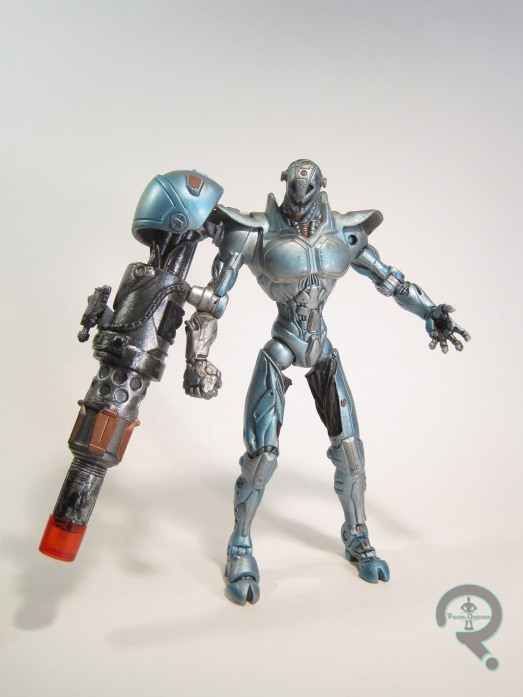 Alright, it’s time for another Flashback Friday Figure Addendum!  Today’s figure is another Toy Biz Marvel entry, though this one’s from a bit later in the reviews.  Let’s have a second look at Avengers: United They Stand’s Ultron!

Ah, yes, Avengers: United They Stand.  Poor A:UTS. it gets a lot of hate and I’m not certain it deserves it.  Perhaps it wasn’t the greatest depiction of the Avengers to grace the small screen(That honor goes to the more recent Earth’s Mightiest Heroes), but I didn’t think it was all that bad.  The designs and animation may be late 90s over complication at its finest, but I thought the characterization was actually nicely done, and I loved the fact that the focus was on the slightly lesser known Avengers instead of Cap, Iron Man, and Thor.  One of my other favorite things was the tie-in toyline, which is what I’ll look at today.  In particular, the toy counterpart of the shows recurring antagonist: Ultron!  This isn’t the first time Ultron’s been mentioned on this blog.  I previously mentioned him in passing in my Vision review, where I mentioned Ultron was the creator of Vision.  Ultron himself was the creation of Avengers founding member Hank Pym, aka Ant-Man, aka Giant-Man, aka Goliath, aka Yellow Jacket, aka Wasp, aka Dude with serious identity issues!  Ultron rebelled on his creator and became a powerful Avengers foe.  He’s also set to be the villain in the upcoming Avengers sequel.

Ultron was released as part of the first wave of Toy Biz’s Avengers:United They Stand tie-in line.  Ultron had several different looks over the course of the show, but this one seems to be a bit of an amalgam of the various looks, with the largest portion of influence coming from his appearance in the show’s first two episodes.   He stands just over 5 inches tall, and features 11 points of articulation (13 if you count the moving knee-pads).  Ultron is a completely new sculpt.  It’s well done, and quite detailed, especially for its time of release.  In particular, the head really captures the look of the character.  The paint is pretty well done, being mostly all one color; a nice bluish silver.  There’s a wash over the whole figure to help bring out the details.  The figure also features a light-up feature.  By pressing the button on Ultron’s waist, you could make the figure’s eyes and mouth light up.  It’s a neat feature that helps to further simulate the look of the character from the show and comics.  At one point, Ultron had a large cannon that hooked onto his right arm, but I’ve since lost that piece.

My dad bought Ultron for me when he was initially released.  We happened to stop at a Toys R Us and there he was.  He was one of the last figures I acquired from the line.  It wasn’t because I didn’t want one, but because the A:UTS figures were quite difficult to find initially, so I kind of got them when I saw them.  Growing up, he was the closest thing I had to a classic Ultron.  Because of that, I have quite the soft spot for him.

Okay, now we’re getting somewhere!  This review is from my second month writing reviews, and you can start to see some of the regular review features coming into play.  Height, articulation and paint are all actually addressed this time.  And I even made it past 500 words!  Granted, most of it was the intro, but still.  Also, this is my first Flashback to a post-random review period. Cool.  Cool cool cool.

My actual review was pretty on point for this guy.  The only thing missing was his big ol’ arm cannon, which was amongst the many items excavated during The Find.  It’s goofy, but also manages to match pretty well with the rest of the figure stylistically, and, amazingly, it doesn’t impede his movement when attached (of course, the shoulder’s still a bit restricted thanks to the wiring that allows it to light up).  Also, I neglected to mention in my original review that Ultra’s sculpt, was an early product of the fine folks at Art Asylum, who would later launch one of the best Trek lines ever put into plastic, as well as creating my favorite brand of all time, Minimates.

I’ve actually got a story about this one! As a kid, I lost this figure around Christmas time and couldn’t locate him for a whole year.  Come the next Christmas, I put on my robe I wore one a year on Christmas morning and found this guy in the pocket.  Seems I’d stowed him there for safekeeping the prior year and total forgotten.  To date, this figure remains my favorite figure of Ultron, so I’m happy he wasn’t missing for too long!