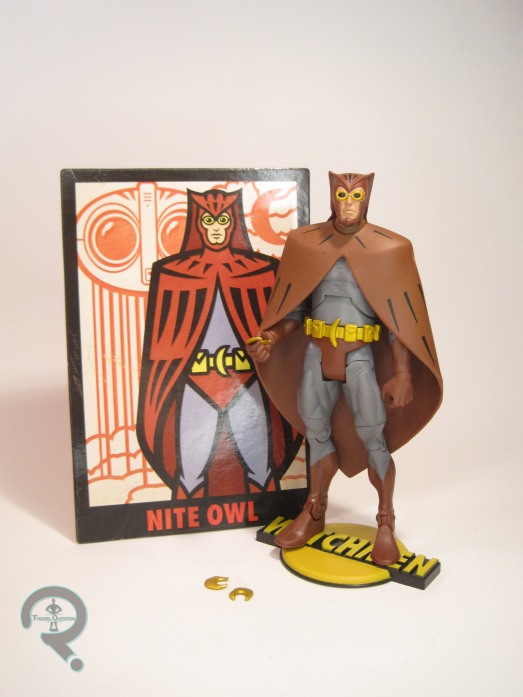 “Awkward, shy, and unnaturally obsessed with masked vigilantes and ornithology, Dan Drieberg was a surprisingly good fit to inherit the mantle of Nite Owl.  He is a talented engineer with a tragic childhood that feeds his needs to help the helpless and fight the good fight.  However, the world is not a perfect place and Dan is forced to constantly question his own morality.”

I’ve now made it through a full week of my post-Christmas reviews, and now we’re kind of nearing the end of this whole thing.  For today’s review, I’m switching over to a property that I’ve covered a few times on this site, Watchmen.  I was pretty huge into Watchmen a few years back, especially around the time of the film adaptation.  In the years since, my fixation has sort of waned, probably due to the overabundance of grimdark super hero stories in the last several years.  I still appreciate it for what it is, and there’s no denying that the story has lots of exciting designs, just ripe for toy form.  The comics designs are somewhat rare in the toy world, but Mattel put out a set of them a few years back, and I’ll be taking a look at the Nite Owl figure from that set today!

Nite Owl was the fourth figure in Mattel’s “Club Black Freighter” subscription, released back in 2013.  He’s based on the comics Nite Owl design, of course, which is a more simplistic look than his more sculpted look from the film, but I feel a slightly more polished and to the point design.  The figure stands 6 3/4 inches tall 23 points of articulation.  The whole Club Black Freighter set was designed to fit stylistically with DC Universe Classics, and a lot of this was done via parts re-use from that line.  For Nite Owl, this means he uses the standard mid-sized arms, legs, and pelvis, along with a new torso and head, as well as add-ons for his cape and belt.  The legs are the end of DCUC legs, meaning they’ve had the rocker-ankles removed.  It’s definitely an annoyance, and it means he can’t really ever keep his feet flat on the ground, which looks rather goofy.  On the plus side, all of the newly sculpted pieces really do look cool.  The head’s a solid piece of work, and replicates Gibbons’ take on Nite Owl quite nicely.  His hard plastic cape, though very cool looking, effectively renders his arms motionless from the elbow up.  The end result to all of this is a figure that’s not really good for anything but standing around.  But at least he looks good, I suppose.  The paint work on Nite Owl is decent enough, and certainly better than a lot of Mattel’s output.  It’s clean and matches well with the art from the book.  It’s not the most thrilling color combination, but that’s true to the character, so one can hardly complain.  Nite Owl is packed with a display stand, three owl-arangs, and a grappling gun, as well as big novelty card thing with an art-deco sort of illustration.  The stand’s fine, but he has some trouble successfully holding any of the other extras.

Nite Owl was another Christmas gift from Super Awesome Girlfriend.  By the time the Club Black Freighter set came along, I was kind of done with Mattel’s whole subscription model and past my Watchmen fixation, so I ended up passing on them.  I almost bought Nite Owl a few times from Matty Collector during a couple of their year-end sales, but never got around to it.  Jess spotted him at the GameStop she works at and grabbed him for me.  He’s sort of an interesting phenomenon, a “super-posable” figure that doesn’t work as much more than a statue.  Ultimately, he’s not a bad figure, but he sort of fails at what he’s supposed to be.  I guess he’s rather par for the course when it comes to Mattel, though.