“When a blaster-toting raccoon, a teenage tree, and a Asgardian god get together, the journey is sure to be out of this world.”

You thought I’d slip, didn’t you?  You thought I’d forget about my new favorite running gag!  That I’d review a Thor figure on a day other that Thursday!  Well….I actually almost did.  Yep, had this one queued up for tomorrow.  Like an idiot.  It’s okay, I got better.  It’s been a week since I wrapped up my first round of Infinity War-themed Legends reviews.  Now I’m coming back to it for another multi-pack.  This one’s got the aforementioned Thor, as well as one-third of the Guardians of the Galaxy, Rocket and Groot!

Thor, Rocket, and Groot are another displaced Toys R Us-exclusive.  They were meant to be the follow-up to Vision and Scarlet Witch, and were only confirmed to exist just before TRU announced they were going under.  It’s not known how many of them actually made it to TRU, but it’s certainly less than Vision and Scarlet Witch.  As with the other displaced exclusives, it’ll be available over the summer via Entertainment Earth.

After taking a bit of a back seat for Age of Ultron, Thor’s right back in the forefront for Infinity War.  Of the many characters included in the film, he’s the first to have a variant confirmed.  This one uses his early-in-the-film appearance, picking up from the end of Ragnarok.  If you haven’t seen that film, his eye-patch-wearing head’s going to be a bit of a spoiler.  It’s a major selling point for this set, though, being the only version of the character available right now with the eye patch.  He’s also sans cape, which is a first for the MCU Thor figures.  I like it.  The figure stands 7 inches tall and has 30 points of articulation.  At first glance, I’d kind of expected this figure to make use of a lot of Gladiator Thor’s pieces, but there doesn’t actually appear to be anything shared between them.  I think that’s ultimately for the best, as I felt there were some minor issues with the last one.  This one has a really solid, hefty construction, and his posablity is actually really great given how bulky he is.  The head looks to be about the same as the un-helmeted Ragnarok sculpt, but with the eyepatch, of course.  It’s a pretty decent likeness of Hemsworth, so I can’t complain.  What I can complain about?  The paint.  It’s perhaps the only thing I don’t like about this figure.  I mean, the basics are fine.  The detailing on the hair works.  But, what I really don’t like is the lightning effects.  The details on the torso in particular look rather cheesy.  I don’t hate the effects on the eye; if it were an extra head, I’d probably find it really cool.  As the only eye-patched Thor head out there?  It’s a little annoying.  Like the Ragnarok two-pack release, he’s packed with Heimdall’s sword.  He still doesn’t use it in this movie, and I still want an actual Heimdall, but it’s better than nothing.

Any Rocket figure is going to have the rather difficult task of surpassing the Mantis Series release.  Hasbro has acknowledged this fact, and pretty much just given us a straight re-release of that figure.  There are some minor paint differences between the two, with the accents being a darker grey this time.  He also only gets the calm head, but he does still get both of his blasters (sadly lacking the cool painted details) as well as his brand-new gun that’s been packed with all of the Infinity War Rockets. 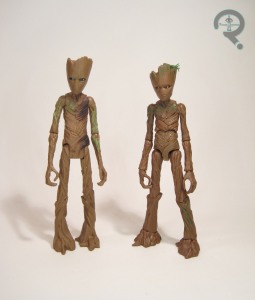 I’d say Groot’s the biggest draw of this set, since we’ve not yet gotten this version of the character in Legends form (though we did get a surprisingly good version of him from the basic Infinity War line).  The figure stands 5 1/2 inches tall and he has 25 points of articulation.  Articulation is the main differentiating thing between the two teen Groot figures, with this one being not only far more posable, but also having the articulation better worked into the overall sculpt.  This figure also gets a little more detailing, especially on the smaller details, such as the little twig growing from the top of his head.  His head seems to be a little more accurate to Groot’s Infinity War design than the basic figure (in the basic figure’s defense, he seems to have been based on our brief glimpse of Teen Groot from Guardians Vol. 2), with a rounder face, and an even poutier expression.  He’s not a perfect recreation of Teen Groot; I think his chin’s a bit too pronounced; but he’s still pretty close.  The paint is kind of sparse on this figure, which is a little surprising given the accent work that the basic figure got.  The browns are just left flat, which is a little disappointing.  On the plus side, there’s some slight green representing vegetation, which keeps him from being too monotonous, and his eyes are nice and sharp as well.  Groot includes his gamepad…or *a* gamepad, because I don’t think this is the one he had in the movie.  It’s still a nice touch, though, and I’m glad he got *something*

I found this set at one of the two slowly dying Toys R Us’s near me.  I thought Vision and Scarlet Witch were just a stroke of luck, but this set popped up about a week after.  Honestly, it’s a set I was uncertain about when it was first shown off, since there’s not a *ton* of new stuff here.  Rocket’s essentially identical.  If you missed his first release, it’s great that there’s a second opportunity, but if you didn’t, he’s extraneous.  I quite like Thor, like to a surprising level, but he’s got a few flaws, and if you aren’t big on lots of variants of the same character, he too can feel a bit extraneous, especially with the fully equipped version from the Cull Obsidian assortment on its way.  A lot of this set’s selling power is resting on Groot.  He’s a good figure, but I can’t say he’s enough of an improvement on the basic series figure to warrant 5 times the price to get him.  Of course, I got my set for 20%, since I got it from TRU, but I can see it being a tricky sell at full retail.  I’m certainly happy I have it, but not everyone’s as willing to drop tons of money on toys as I am!

*Miss this at TRU and still want a set of your own?  It’s currently in stock with our sponsors over at All Time Toys!  Check it out here! 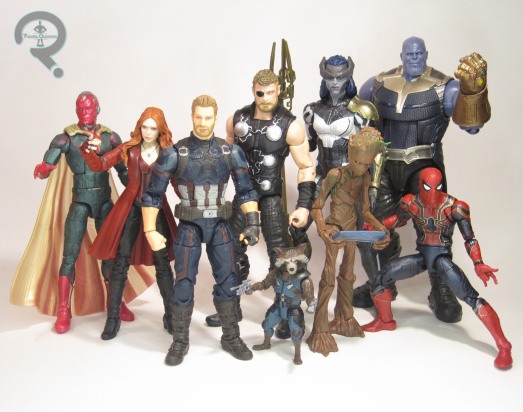