2018 marks the fifteenth year of Marvel Minimates, if you can believe it, and DST’s celebrating that with Series 75 (which, of course, all long-term fans know, is actually only the 74th Series in actual count, thanks to Series 15, the only series of Marvel Minimates ever to be outright cancelled).  75 is Marvel Knights/Defenders themed, offering up some of Marvel’s lower level characters.  Today, I’m looking at the one set in the series not to actually feature any of the current Defenders members (but don’t hold that against them), Moon Knight & Punisher!

As noted above, Moon Knight and Punisher are part of Series 75 of Marvel Minimates, which takes loose inspiration from the Netflix slate of Marvel shows.  Moon Knight’s kind of out of the odd man out in this respect, but maybe he’ll show up in the next slate of them?  Please?

Also included in this set are two pieces of the very first Minimate Build-A-Figure, Quake!  In this set, we get both the legs.  They’re just standard legs, done up in colors to match the SHIELD agents from Series 43 and 51.

This is only Moon Knight’s sophomore figure in the Minimates line.  His last was all the way back in Series 29, 46 series and 9 years ago.  I think that’s a decent enough wait time for a re-do, don’t you?  This one’s not actually a straight re-do; it’s based on his armored look from Warren Ellis’s re-boot of the character.  It wasn’t his main look during Ellis’s run, but it was picked up by others, and has shown up in a few games and one of the cartoons.  I think it’s a solid re-imagining of his usual look.  Of course, as luck would have it, he went back to his all-white look a few months before this guy hit shelves.  Oh, darn, I guess we’ll just need another Moon Knight.  The figure stands 2 1/2 inches tall and has the usual 14 points of articulation.  Moon Knight’s sculpted elements are limited to his signature cloak.  Like his last Minimate, the hood and cape are two separate

pieces, in order to help maximize posability.  These have been the source of some contention in the fanbase, with lots of debating over which cloak is the superior one.  While the old one always looked nice, it was never much for posing, and made keeping him standing nearly impossible.  This new one dials things back a bit, and gives us a more simplified design.  It’s still not perfect.  The hood in particular bugs me; something about its shape is slightly off.  Still, it’s an improvement in terms of playabilty, which makes for a better figure. Moon Knight’s paintwork is nice and bold.  It’s coming at the character from an entirely different angle than the last ‘mate, being very sleek and clean.  There’s a little bit of bleed over on some of the black-to-white changes, but for the most part, he looks pretty sharp.  In particular, the wider eyes seen on this version’s mask feel more in tune with the character than the tiny squinting eyes from the last one, and I also really like the grey highlights, which keep the black sections from getting too monotonous. Included with Moon Knight are his staff and a clear display stand.  The staff is re-used from the animated Proxima Midnight, but it a decent match for the staff Moon Knight is usually seen carrying about.

I’m not sure of how comfortable I am with the “Frontal Assault” descriptor.  Wouldn’t such a name would be more appropriate for one of the trench-coated variants?  To DST’s credit, there are only so many buzzwords you can throw in front of the name “Punisher.”  Just plain “assault” was already taken and yet another character with the “Marvel Now” moniker might tear open a rift in the space time continuum.  But, I digress. Frank Castle is no stranger to Minimates, this being his eighth entry in the line.  This one’s his first comics-based ‘mate since 2013 (barring the 2016 re-release of the Best Of ‘mate), and it’s based on his pre-Secret Wars look from around 2014 or so.  It’s a nice sort of tactical look for the character, and also offers something in keeping with how the character looks in the Netflix shows. Punisher has add-on pieces for his hair and tactical vest.  I believe both of these are new to this particular figure.  The vest definitely is, but the hair is throwing me.  Regardless, both pieces are incredibly well-sculpted, and very nicely suited to the character.  The vest in particular just really encapsulates how I feel the Punisher should look. Punisher’s paint work is really a collection of pleasant surprises.  Let’s start from the

weakest point and move upwards: his vest and sleeves show a little bit of slop.  Nothing too terrible, but notable given the quality of the rest of the paint.  The face is pretty classic Frank Castle, all grizzled and angry.  The application’s quite clean, and I like that they’ve even given him his stubble (not that stubble’s exactly a new thing on Minimates).  Under the vest, there’s a skull-emblazened t-shirt, which is a very nice touch.  He’s also got some incredible small detail work on his arms and legs, with the legs in particular standing out with all the stitching and line work associated with the tactical pants.  Really great attention to detail there. Punisher includes an HK94A3 Rifle (first included with the T2 SWAT officer), as well as a skull-faced mask piece (based on a mask he was frequently seen wearing during the 2014 run), and a clear display stand.  I’d have liked to get some additional guns.  Just the rifle seems a little light.

I got this set from my LCS, Cosmic Comix (okay, technically I got it from Tim, who bought it from CCX; he was paying me back for grabbing him an Obsidian Fury).  Moon Knight’s been due another Minimate for a while now.  This one takes a decidedly different approach to the character than the last one, so a direct comparison is a bit difficult, but this offering walks the line of look vs playability better than the last one.  I’m hopeful an all-white variant might show up in the near future.  In the mean time, this one’s a solid addition.  In a set where the clear selling point was Moon Knight, Punisher serves as sort of a sleeper figure.  As only a moderate fan of the character, I wasn’t anticipating much from him, but he’s a high quality, truly exceptional ‘mate. 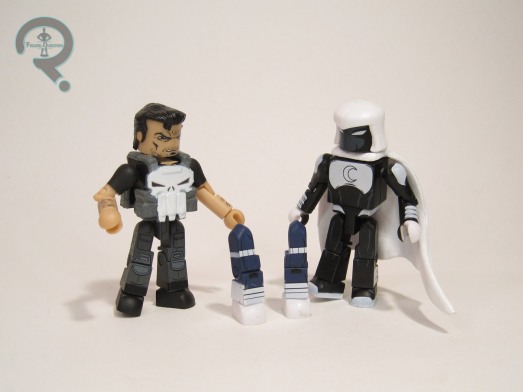