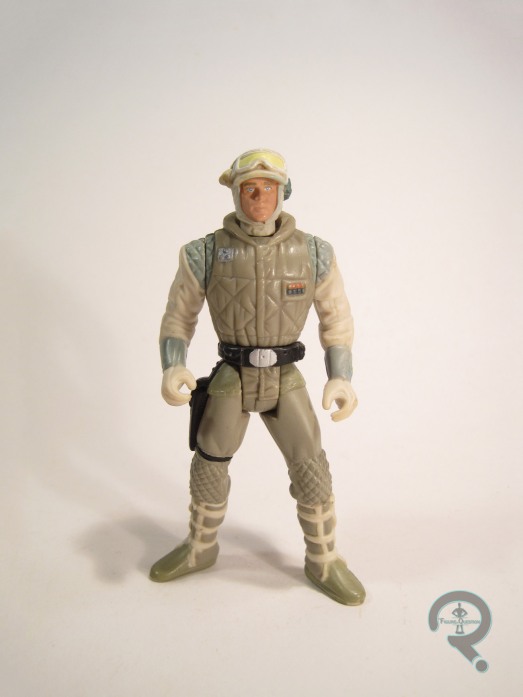 Doesn’t it feel like I *just* reviewed this figure?  Well, I didn’t.  Well, I didn’t.  Reviewed a very similar figure, of course, because that’s the insanity of toy collecting.  But this one’s different, you see.  He…ummm….he’s got…goggles?  Yeah, let’s go with that.

Luke Skywalker in Hoth Gear was released in the 1997 assortment of Power of the Force II figures.  We’d had our first taste of Hoth figures the prior year with a Hoth version of Han.  The figure stands 3 3/4 inches and he has 6 points of articulation.  He’s wearing the same cold-weather gear that we saw him wearing in the two-pack with a Wampa, but this figure depicts him a few moments earlier in the film, prior to the Wampa’s attack.  So he still has the goggles, and his face is un-scarred.  His sculpt is unique to him (though parts of it would be slightly re-tooled for a few later variants of this same gear), and it’s pretty decent.  He’s still a bit puffy and bulked-up, but with the cold-weather gear, that doesn’t feel quite so off.  The level of detailing on the outfit is quite sharp, and looks very good for the time, rivaling even more modern offerings.  My figure is missing his little head scarf thingy, which was a free-hanging piece that was prone to breaking off.  Luke’s paintwork is about what you’d expect.  Fairly basic and an overall decent match for what we see on the screen.  Application is clean, and there’s pretty much no slop.  Hoth Gear Luke was originally packed with his lightsaber and a blaster pistol, but mine has lost them in the years since I got him.

I remember this figure being rather hard to come by, at least initially.  Stores still had tons of Hoth Han, and I was constantly having to explain that it wasn’t the same thing.  I eventually got him in the Farpoint Dealer’s room the year he was released.  If I recall correctly, it was the same dealer from whom I ultimately got my Princess Leia figure, that very same year.  It’s been a favorite of mine for a while, even if it is rather environment specific.