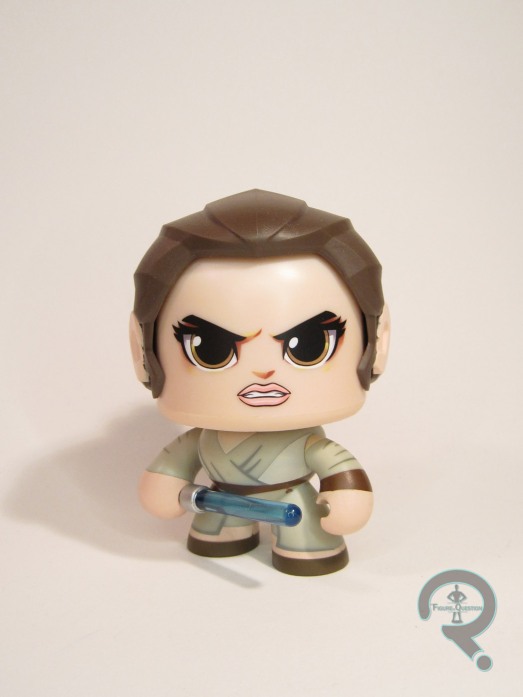 Remember how I was talking about having some Mighty Muggs piled up to review yesterday?  Well, yeah, let’s have a little bit more of that, shall we?  In fact, let’s have some more of the same subline from yesterday!  Yes, it’s time for some more Star Wars, specifically the franchise new lead character Rey! 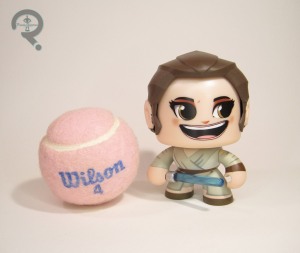 Rey is figure 02 in the Star Wars Mighty Muggs line, placing her second in the first assortment of figures.  Rey’s design here is taken from The Force Awakens, specifically her appearance from the Starkiller Base sequences.  It’s a little bit surprising given the general leaning towards the Last Jedi designs for the new trilogy characters, but it’s kind of a persistent look.  The figure stands 3 1/2 inches tall and she has three-ish points of articulation, if we’re counting the slight mobility at the neck joint.  Since she’s from TFA‘s final battle sequence, Rey uses the same lightsaber-weilding body that was used for Luke, with a unique hairpiece.  The hairpiece is a nice, stylized summation of her look from the movie, which fits in very well with the piece we saw on Luke.  For Rey’s three facial expressions, she goes for a similar selection to Luke.  She’s got a serious expression, a happy expression, and an angry expression.  Of the three, my definite favorite is the happy one, but the angry one works well, too.  Her stern expression is alright, but the mouth seems oddly small when compared to the other Muggs I’ve looked at.  It just throws her whole look off, and ends up making her look a bit more childish than the others.  But hey, 2 out of 3 ain’t bad, right?

I saw Rey a few times before actually picking her up.  I think I was holding out that I might be just grabbing the whole set of the first series, but I never did get around to that.  I eventually got around to picking up Rey from GameStop while visiting Super Awesome Fiancé there one day.  She’s a nice companion piece to Poe and a pretty fun little figure all around.