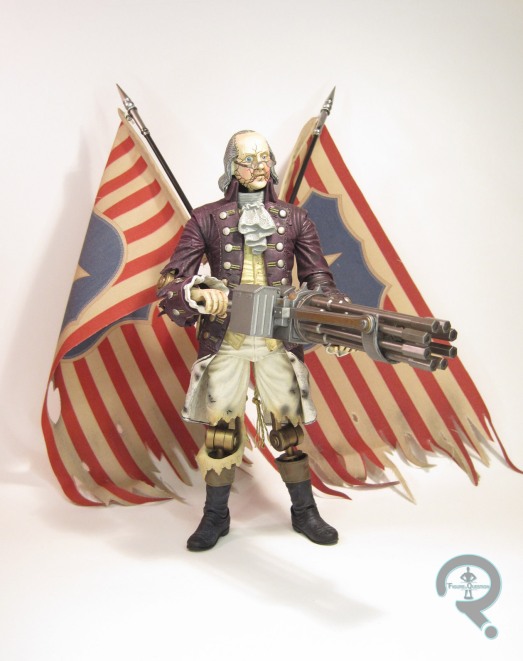 “Originally constructed by Fink MFG. to serve as tour guides for the residents of Columbia, the Motorized Patriots now serve as a standing guard for the entire city.  Fearless and unrelenting, without a shred of self preservation, the Patriots will track down and eliminate any opposition without remorse.  Will you be able to find the right combination to defeat these automated monstrosities?”

You guys ready to play another game of Ethan reviews a figure from a video game he’s never played?  Oh yeah, let’s do this!  The game I’ve never played this time is Bioshock Infinite, the third game in the Bioshock series, a whole series of games I’ve never played.  But this one has cool old-timey motorized robot automaton things, which in turn make for cool action figures.  And that’s by far the most important thing for me.  So, without further ado, here’s the Motorized Patriot.

The Benjamin Franklin Motorized Patriot is the second to last release in NECA’s Bioshock Infinite line.  He’s the second of the Motorized Patriot after the George Washington version from earlier in the line.  Unlike Washington, who was actually in the game, Franklin is just a concept figure.  The figure stands 9 1/4 inches tall and he has 19 points of articulation.  Ben shares most of his pieces with the first Motorized Patriot.  The movement on the joints is a little bit stiff, especially on the legs.  That right knee in particular doesn’t have much budge to it.  With that said, you can definitely get the basic standing poses the Patriots stand in in-game, and he’s pretty stable.  The body sculpt is up to NECA’s usual standards, with sharp, crisp detailing on the uniform, and some very nice dynamic work on the folds and wrinkles, which matches up pretty decently with the game stylings.  This figure removes the shoulder pauldrons from the Washington Patriot, which actually does quite a bit to change up the general shaping of the figure, and sell him as a more unique “character.”  Also helping sell him as a new character is the unique head, which captures the classical Ben Franklin image.  It does look perhaps slightly off on the thinner Washington body, but it’s a solid sculpt in its own right.  In contrast to Washington, Ben gets to keep both of his eyes, though one of his lids is broken, helping to keep up that sort of creepy appearance.  The paint work on Ben is pretty impressive.  He swaps out the blue of Washington’s military jacket for a deep purple, which works quite well for the design.  The application is all quite clean, and the accent work on his uniform does a lot of favors for the sculpt.  The Patriot’s primary accessory is his main weapon, the Peppermill gatling gun.  It features a spinning barrel and a rotating handle, and is just generally a pretty cool piece.  The only slight downside is that the handles are the slightest bit too big for the figure’s hands, which can easily cause breakage if you aren’t careful.  Fortunately, you can pretty easily mod the figure’s hands by cutting the connection between in thumb and forefinger, and that saves a lot of trouble.  The Patriot also includes a pair of Columbia flags, for mounting on the figure’s back, as well as an alternate head, sans the Franklin mask, which is also appropriately creepy.

Back when these figures were new, I totally meant to get one of these guys.  I was trying to pick between Washington and Franklin, and just ended up getting distracted by other things.  So, why end up with one now?  Well, as you may have noticed, the number for this review is 1776, so I wanted something appropriately festive, and I remembered these guys.  Fortunately, I was able to get some assistance from my friends at All Time Toys, who were able to secure me this guy for this review.  I think if I had the choice, I might have instead gone for Washington, but this one is still really, really solid.

If you want one of these for your very own, he’s still in stock with All Time, so check him out here.  Or, if your looking for something else, make sure to check out their web store and their eBay storefront.