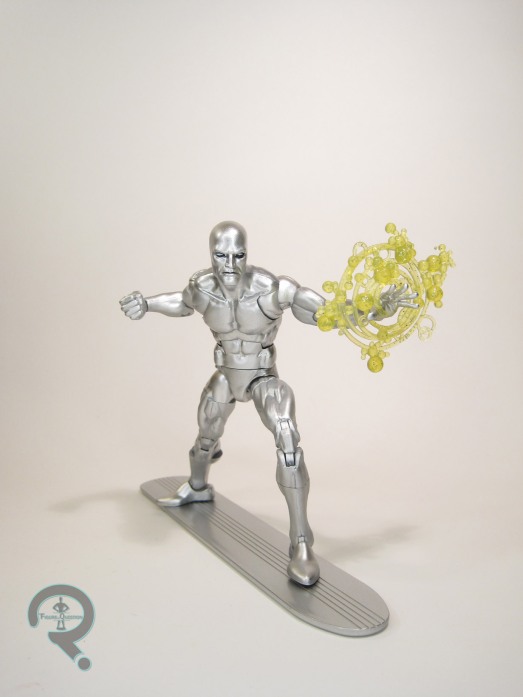 “A metallic-skinned humanoid from the planet Zenn-La, the Silver Surfer gets his name from his shimmering appearance and iconic hovering surfboard.”

Introduced during the legendary “Galactus Trilogy” that ran through issues 48, 49, and 50 of the original Fantastic Four run, Norrin Radd, the Silver Surfer, took on something of a life of his own, as quite a popular hero in his own right.  He found himself teamed with Dr. Strange, Namor, and the Hulk to form the surprisingly under-known Defenders (no relation to the Netflix series of the same name), and proved a pivotal figure in quite a number of Marvel’s great big cosmic epics.  Nevertheless, he’s still inescapably linked to the team whose book spawned him.  In fact, it’s extraordinarily rare that the FF makes a toy appearance without this guy in tow, and their latest, much heralded return to Marvel Legends was no exception, though we sure did have quite a wait to get him. 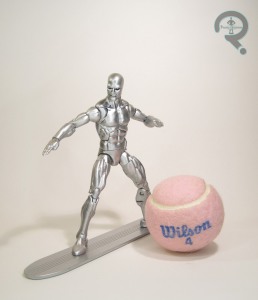 Silver Surfer is the ninth Walgreens-exclusive Marvel Legends figure, and the fifth in their Fantastic Four sub-line that’s been running since early 2017.  He was originally supposed to start showing up at Walgreens this past spring/early this summer, but they seem to have run into a few issues with distribution over the last year, meaning he’s really just started showing up in substantial numbers within the last month, almost in tandem with the Thing figure that was supposed to be his follow-up.  Though Surfer was an early addition to Legends during both Toy Biz and Hasbro’s tenures, we haven’t seen a new one since 2007, and that one was somewhat middling, even when it was new.  His absence has certainly been felt as we’ve added more cosmic figures to the line.  This figure stands a little under 6 1/4 inches tall and has 34 points of articulation. He’s built on the Sunfire/2099 base-body, and I’m of two minds about this.  While the general build and the presence of those very nice butterfly joints at the shoulders make for a figure that’s impressive internally, the use of the 2099 body also means that Norrin’s a little smaller than I generally think of him being when compared to the rest of the line.  As it is now, he’s a smidge shorter than the Human Torch (who was on the Bucky Cap body), which just seems wrong.  Of course, that could be more connected to my increasing frustration with the choice of the Bucky Cap body for Johnny…I’ll get past it.  The simple fact of the matter is that this is really the best body Hasbro had on hand for the Surfer right now, and I certainly don’t hate it.  I’m just mildly perplexed, that’s all.  Surfer gets a new headsculpt, and aims to really set right the problem that both prior Legends Surfers had: tiny heads.  This one is certainly much more properly sized for the body it’s been placed on, and captures his usual stoic expression quite nicely.  The paint is pretty what you expect from Silver Surfer: a lot of silver.  Just a standard metallic silver, though; no fancy chroming or anything, though I imagine that wouldn’t hold up too well with all of the articulation.  It’s just a straight silver, with no accents or anything, which, after seeing how the Toy Biz figure turned out, was probably for the best.  Silver Surfer is packed with a healthy assortment of extras.  He’s got three sets of hands in fists, flat-handed, and open gesture poses, adding a much appreciated variety of character to the figure.  He also includes his titular surf board, which is a decent piece.  It goes back to the foot-peg method of connecting, which may not be as fancy as the magnets from the Toy Biz one, but I think it ultimately looks a bit better in the end.  Lastly, he includes a pair of energy effects pieces.  They’re the same swirly ones we’ve seen a number of times over, but this time they’re clear yellow and all sparkly.  Yay?

I had a few near misses on finding this guy, which was more than a little frustrating.  Fortunately, I was able to find him without much trouble (in fact, I was even able to score a second one for my dad).  He’s not without his little quirks, but by-and-large, he’s a solid offering, and certainly the best Legends version of the character to date.