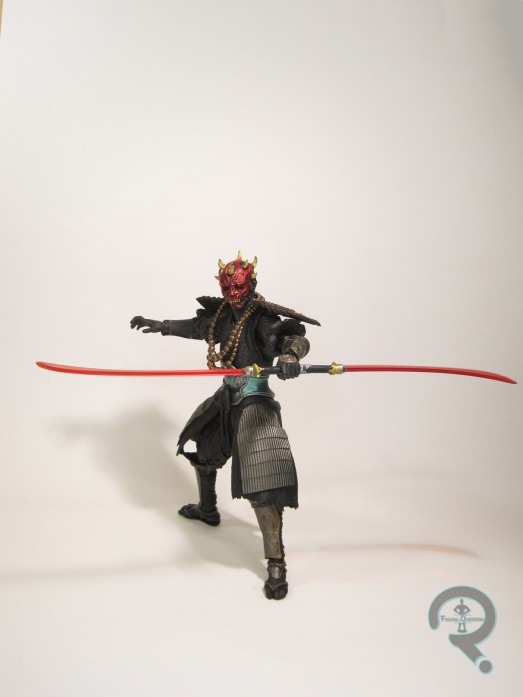 Yes, it’s that time of year when I’ve gotten so many new toys from all the people that love me so much, and I always feel the best way of handling a large influx of new toys is to just jump headlong into the reviews.  No turning back!  Today, I kick things off with a theme that I assure you will be sticking with us for a good portion of the reviews to come: Star Wars.  That said, today’s focus item is a slight variation on the theme.  He may be from Star Wars, but it’s definitely a more conceptual version of the story.  I’m taking my second look at Bandai’s reimagining of the Star Wars movies as Samurai films, Sohei Darth Maul! 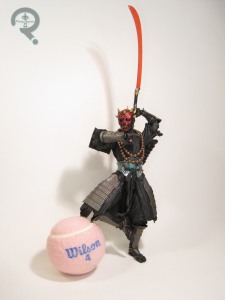 Sohei Darth Maul is one of the 2018 releases from the Meaisho Movie Realization line, which re-envisions Sith Lord Darth Maul as Sohei, or a warrior monk.  Admittedly, “warrior monk” isn’t much of a stretch from the basic Jedi thing.  It’s *almost* as if the Star Wars characters naturally lend themselves to this sort of thing!  The figure stands 7 inches tall and he has 43 points of articulation.  As with the Royal Guard, there’s something of a learning curve on posing these guys, though I had a much easier time with Maul, largely do to already having experience with the line.  Maul’s sculpt appears to be totally unique to him, which is sensible, given that as a prequel character, he would be of a slightly vintage than the Vader and troopers we’ve gotten so far.  It’s certainly a very nice sculpt, with lots of detail work worked throughout all of its various pieces.  The texturing on his tunic is very realistic, and keeps it from being too bland, and the armored pieces are all quite intricately designed.  The head is rather demonic, even for Maul, indicating that he’s actually some form of spirit or demon in this reimagined version of the tale, which is certainly a cool concept.  It gives Bandai free reign to have a bit of fun with it, and the end result is a very expressive piece.  The paint work on Maul is quite impressive, especially given the fact that the character is typically quite monochromatic.  While his basic clothing is still straight black, the overlying armor has all sorts of subtle color work going on.  It makes for a very interesting looking figure, and he’s got plenty of elements to help him pop off of the shelf.  Darth Maul is packed with a pair of swords, which can be attached at the hilt to simulate his signature double-bladed saber from the movie.  The actual blades can also be removed simulation them being turned off.  Also included are a face mask  (furthering the demonic experience), and beads, which can be removed to mix up the appearance.  Finally, he includes three sets of hands in fists, gripping, and open gesture poses.

Like the Royal Guard before him, Sohei Darth Maul was a Christmas gift from my boy Tim.  I had actually just been looking at this figure about a week prior to receiving it from him, so it was a rather well-timed gift.  Again, like the Royal Guard, there’s just a lot to like about this figure.  He’s got a cool look, has a great selection of alternate appearances, and is just generally a lot of fun.  I really look forward to seeing what else this line tackles (I’d kill for a scout trooper, let me tell you). 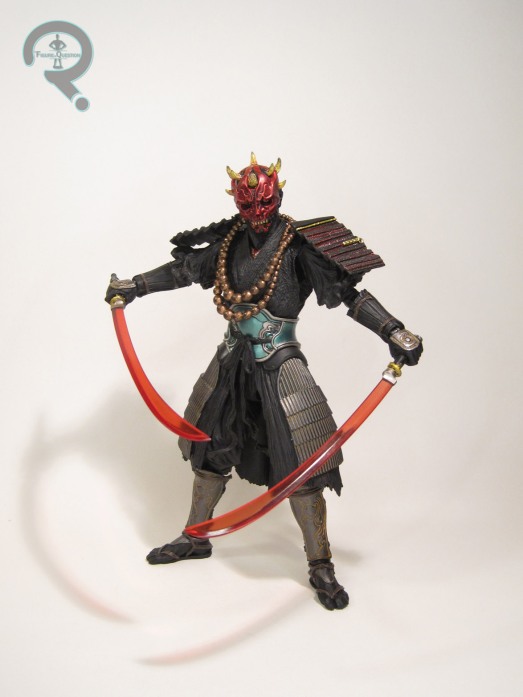