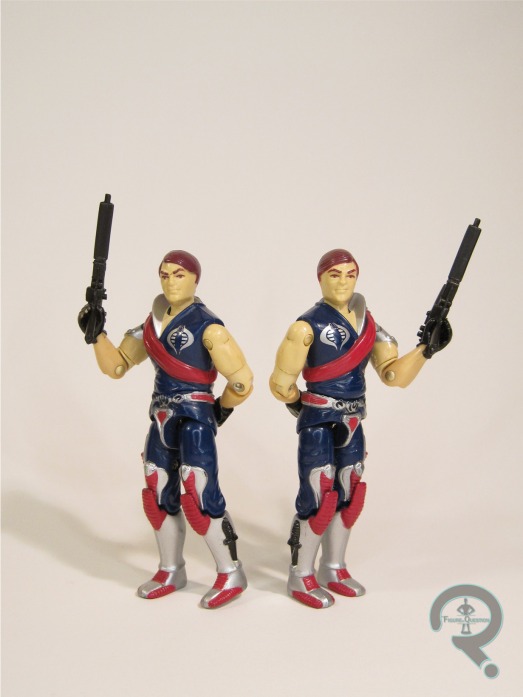 “Spell on the name TOMAX in capitals and and hold it up to a mirror. It reads XAMOT. The same holds true for the actual brothers. Each is the mirror image of the other except for a scar on Xamot’s face. Both twins served with the Foreign Legion paras in Algeria before the officers Putsch. They honed their mercenary skills in the bush wars of Africa and South America. They were too smart to be soldiers forever. Went to Zurich and became bankers.

They quickly found the ins and outs of international finance to be too haphazard for their tastes. They preferred a situation they could control. COBRA was willing to give them access to that control. Now they command legions. But their legions wear three-piece suits and fight their battles in executive board rooms. These then are the most fearsome of the COBRA adversaries. They don’t fight with steel and claw, backed with muscle and honest sweat…The chase you with paper, wound you with your own laws and kill you with the money you loaned them.”

If you’re looking for an easy shortcut to the whole creepy villain thing, identical twins are a good way to go, all things considered.  And, when you’re running a broad strokes, everybody’s got a gimmick toy-line, even better.  There’s your gimmick right there.  Such went the creation of Cobra’s own creepy twins, Tomax and Xamot!

Tomax and Xamot were released in 1985 as a special two-pack; rather than forcing you to track down both individually, Hasbro was actually kind enough to give them both in one go, a practice that they would hang onto for all future releases of the characters.  The figures stands 3 3/4 inches tall and they have 14 points of articulation.  Despite their very similar appearances, the fact that one is a reflection of the other and all the asymmetry that brings means that Tomax and Xamot actually share very few pieces.  The pelvis and the lower arms are the only parts that are actually the same, with everything else being a mirror image of the other figure.  For clarification, Tomax is the one on the left up there, with his armor an his right shoulder, while Xamot is the one on the right, with his armor on his left shoulder, and a scar on his left cheek.  Interestingly, both the cartoon and the comics of the time would mirror the figures, with the armor and Xamot’s scar switching sides on their respective characters.  The two sculpts are pretty decently handled.  The Cobra designs were quickly becoming more fantastical at this point, and it starts to show here.  There’s not a practical reason for these two to dress in this particular fashion.  It does give the opportunity to show off some decent texture work, though.  As far as the actual mirroring goes, given the pre-digital nature of the sculpting, they didn’t do a half bad job of matching these two.  The roughest bit is definitely the hair-part change-over on the heads; it appears Tomax was sculpted first, as his feels the more natural of the two, while Xamot’s is not quite identical in its angling.  Still, really strong work given the time and the scale.  The paint on these two follows the established Cobra norms: dark blue, red, a dash of silver, and some black.  It’s all pretty straight forward stuff, and it makes it pretty easy to tell which side they’re on.  The twins were each packed with a laser pistol, as well as a skyhook and zipline to share.

I’ve wanted to get Tomax and Xamot for quite some time, in some form or another.  They weren’t *completely* absent from the 2002 re-launch, but they were packed in with a kind of pricey larger vehicle, which was a little bit prohibitive for me as a child.  I remember eyeing up their Real American Hero Collection re-issues at the time, but never got them, and the same was true of their 25th Anniversary figures.  When these two came in in the large Joe collection that came into All Time several months ago, they were some of the earliest figures I set aside.  I don’t know why they’re so cool to me, but I just really dig the implementation of the concept, and I’m happy to finally have a set of them in my collection.

Like I noted above, the Twins came from All Time Toys, who got in a rather sizable vintage Joe collection, the remnants of which can be checked out the Joe section of their eBay page here.  If you’re looking for other toys both old and new, please check out their website and their eBay storefront.