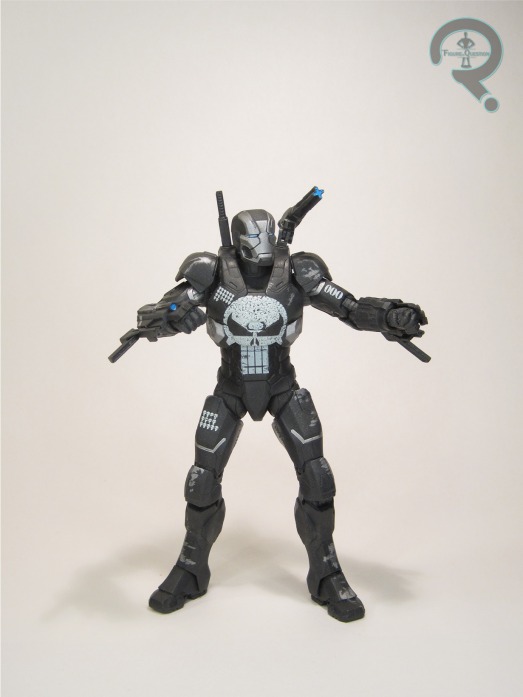 “After the fall of War Machine, Frank Castle acquires the highly-weaponized armor and makes it his own.”

Hey, that’s actually a pretty succinct summation of the character in that bio.  Good for Hasbro!  Punisher War Machine is a pretty straight forward concept: you put Frank Castle in the War Machine armor, and boom, there it is.  It’s not like you need a ton of explanation, and quite frankly, it was one of the less out there change-ups to the Punisher status quo.  Guy’s been a freaking Frankenstien; this is nothing.  Well, that’s not entirely true.  It’s not “nothing,” it’s actually a pretty great marketing opportunity, as well as a pretty easy variant for toy makers.  On the high end, we’ve got a Hot Toys version on the way, and on the low end we’ve also got the Legends treatment.

Punisher War Machine is another Fan Channel-exclusive Marvel Legends offering, and is in fact the second version of Frank Castle to be offered in this assortment of figures.  The figure stands 6 1/2 inches tall and he has 31 points of articulation.  After getting a few new pieces, even though they may have been minor, this Punisher returns to the straight repaint style for the line-up.  He’s a straight repaint of the surprisingly under-utilized Mk003 War Machine mold from Civil War.  Previously, the mold only got released in a Target-exclusive two-pack, which is a bit surprising given that it was all-new at the time.  The armor isn’t a perfect match for the armor Frank grabbed in the comics; that one was more patterned on the design from IM2, with maybe a bit of AoU thrown in.  I’d guess that it came down to mold availability; the IM2 molds are probably hard to access at this point, and I doubt if anyone really wants a fourth release of the Mk002 mold.  This one is close enough, and honestly one of Hasbro’s best WM molds, at least prior to the Endgame release.  There’s a little bit of limitation to what you can do with the articulation, and the guns, baton, and cannon don’t stay in place quite as securely as I’d like.  Also, he’s from before they got on board with standardizing neck pegs, so his joint’s too small to work with any of the Frank Castle heads (the one I shot for this review is just resting in place).   Overall, though, he’s a very workable figure.  It’s definitely the  slickest War Machine sculpt Hasbro’s produced, and it holds up well even a few years later.  The paintwork on this figure is, of course, where all of the actual changes are.  He’s not terribly far removed from the standard War Machine layout, but gets Frank’s usual skull insignia on the front, plus a few other skulls littered throughout the armor as a kill count.  He also has a little more wear and tear represented than the prior release, showing how hard on the armor Frank’s been.  The only real complaint I have is that they’ve left the helmet pretty much alone, when it should really be sporting a white skull motif on the face plate.  It does undersell the Punisher bit a little.  This figure has the same accessories as the last release of the mold, so he gets a fully engaged version of the baton and an extra set of hands in gripping poses.

Like I said in my review of the Endgame War Machine, I never picked up the Civil War figure, and I was always a little regretful of that.  So, I was pretty happy when I found out that this figure would be using the mold, thereby allowing me to add it to my collection.  I’m not the world’s biggest Punisher fan or the world’s biggest War Machine fan, but I can appreciate a lot about this figure.  Ultimately, I’m pretty happy with him.

Punisher War Machine was purchased from my sponsors over at All Time Toys.  If your looking for other Legends or other toys both old and new, please check out their website and their eBay storefront.