In October of 2017, I reviewed Mattel’s take on Brandon Routh’s Atom from Legends of Tomorrow.  It may be the greatest letdown I ever experienced under Mattel’s tenure with the license, and given how badly they ran things for the last five years or so, that’s saying something.  Don’t drink and buy toys, guys.  The thing about the figures from the CW shows was that both Mattel and DC Collectibles had their proverbial fingers in the pie, and that meant we got multiple options for several of the characters.  As a rule, I tended to go with the DCC versions, but Mattel’s Atom got the jump on DCC, which is why I got that one.  I always meant to get the DCC version as a follow-up, but, well, I didn’t.  Until now, anyway. 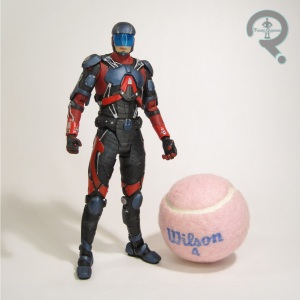 Atom was figure 3 in the Legends of Tomorrow line from DC Collectibles.  He hit shelves in late 2017, and was in an assortment that also included Kid Flash and White Canary, though as is often the case with DCC figures, the assortment had no bearing on them actually getting to stores together.  As such, Atom hit a bit after the other two.  The figure stands 6 3/4 inches tall and he has 26 points of articulation.  The Multiverse Atom was pretty awful in the articulation category, as was true of most Multiverse figures of the time.  This one’s not perfect by any means; after all, he’s DCC, and they have mega troubles with articulation, too.  As much as I liked the Kid Flash from this same assortment, his articulation did leave some things to be desired.  There are definitely some spots on this guy, notably the hips and the mid-torso joint, which aren’t sporting a lot of range, and in fact feel a bit like they may break if pushed much beyond their basic positioning.  He also comes from the period after DCC decided that lateral movement on the legs didn’t need to be a standard thing (the decision that pretty much killed my interest in their Batman: Animated line), but at least in Atom’s case, they did manage to make it work so that it doesn’t completely ruin the figure’s posing options.  Additionally, the rest of the joints all have some pretty solid range on them.  I mean, this guy can actually bend his arms!  That’s crazy.  Matty Atom can’t do that!  I also quite like how they’ve articulated the shoulder pads so that they don’t hinder his movement; it woks very well.  The articulation is far better worked into the sculpt on this guy than it was on the Mattel one, which is funny, given that it’s far more useful on this guy.  His sculpt is a pretty solid recreation of the suit design from the show.  The detailing is all pretty sharp, and the layering works to make him look convincingly like a guy in a suit of armor.  The whole face is sculpted on this one, and it’s a respectable likeness of Routh.  He’s got a separate visor piece, which again helps selling the depth on the sculpt.  Paintwork on this guy is pretty decent.  Mostly it’s just basic work, but there aren’t any missing details, and I do quite like the metallic finish on the blue sections of his armor.  It works far better than the flat blue on the Mattel figure.  The visor is actually a clear blue plastic piece, unlike the solid black that Matty went for.  This guy is packed with four sets of hands (fists, gripping, open, and fists with a blast effect), as well as jet effects to plug into the back of the suit.  It’s a shame we didn’t get an unmasked head, but given how Mattel’s attempt went, maybe it’s for the best.

I intended to pick this guy up as soon as he was released, because I was just really let down by that Matty figure, but he ended up being one of the figures that DCC didn’t really get out to everyone.  My LCS didn’t get him at all, and I just never did get around to ordering one online.  By the time I thought about it, he had gotten a little pricey.  In the midst of being stuck at home, I ended up looking around again, and happened to find him through a third party seller on Walmart.com of all places, for about a third of his going rate.  I was a little skeptical and was fully expecting to receive the Matty figure instead, but was pleasantly surprised when the correct figure arrived.  He’s not perfect, but he’s so much better than the other figure, and I’m glad I finally tracked him down.