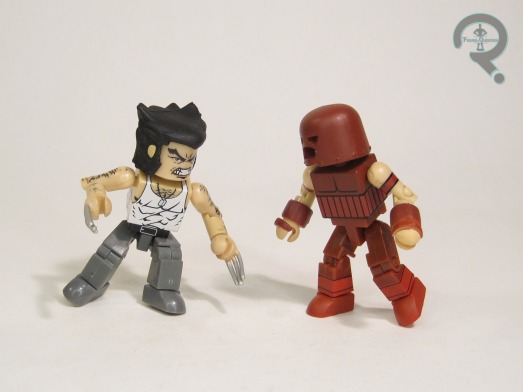 The first year of Marvel Minimates had assortments that were all themed, but when they entered their second year, most of the assortments got a little more mixed.  For Series 5, we really saw that kick in, with each two-pack representing a different facet of the Marvel Universe.  We got our first taste of the Avengers with the previously reviewed Captain America & Absorbing Man, as well as a return to the X-Men with today’s focus, Civilian Logan and Juggernaut.

Logan and Juggernaut were released in Series 5 of Marvel Minimates.  Both would also be included in a TRU 4-pack, alongside Battle-Damaged Daredevil and Masked Spider-Man, and Logan also hit Walmarts and Targets in a two-pack with Masked Spider-Man again.  A slightly tweaked version of Juggernaut was also included in the very easily found Darktide boxed set, meaning these two are definitely numerous. 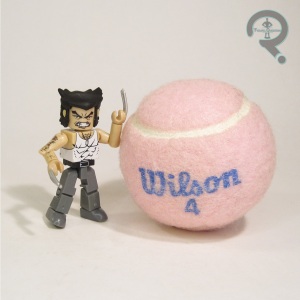 We got a civilian version of Wolverine in Series 3, but I guess we needed one more, because, you know, Wolverine.  This time, he doesn’t have the jacket, though, so I guess there’s that.  The figure uses the older basic body (with the long feet), so he’s 2 1/4 inches tall and has 14 points of articulation.  He gets a new hair piece, which is a little wilder than the previous ones (it would be re-used a few times), and also re-uses the clawed hands from the prior three Wolverines.  It’s a fairly basic set-up, but it works well enough.  I myself am not the biggest fan of the larger Wolverine hair, however there’s certainly precedent.  The paint work is pretty strong on this guy.  He gets a far more detailed facial expression, which is really angry, and the torso block gets quite a bit of detailing, making it stand out a fair bit from these earlier ‘mates it was released alongside.  It’s a little weird that his feet are the same grey as the rest of the leg, but it doesn’t look terrible or anything.

Nothing stops the Juggernaut…is a surprising phrase to attach to this particular iteration of the character, because, quite frankly, he looks like he could be stopped by a stiff breeze.  The larger characters were still a ways away from getting any bulked up parts, so Juggernaut just gets his helmet and bracers.  It’s definitely a different look, and makes him look a lot punier than he should.  At least he has the slightly larger hands to give him something more.  That’s better than either Hulk or Venom got.  Juggernaut’s paint work isn’t quite as impressive as Logan’s, but there’s still quite a bit of detailing going on, especially on that face.  Speaking of his face, since Cain’s visage is pretty much entirely covered by his helmet, Juggernaut was the very first ‘mate to get an alternate hair piece to allow for a sans helmet display.  It’s not really the best piece ever, but it’s certainly better than nothing.

I had this set when it was new, but I can’t say it was ever really a favorite of mine or anything.  I mean, it was serviceable, but it was the first of the kind of unnecessary Wolverine variants that would come to plague the line, and Juggernaut feels somewhat underwhelming.  I ended up losing most of the parts to my originals, and got a replacement pair when All Time got their big Minimates collection in last year.  I still don’t really have much connection to them, but I can admit that they were both better than I recalled.