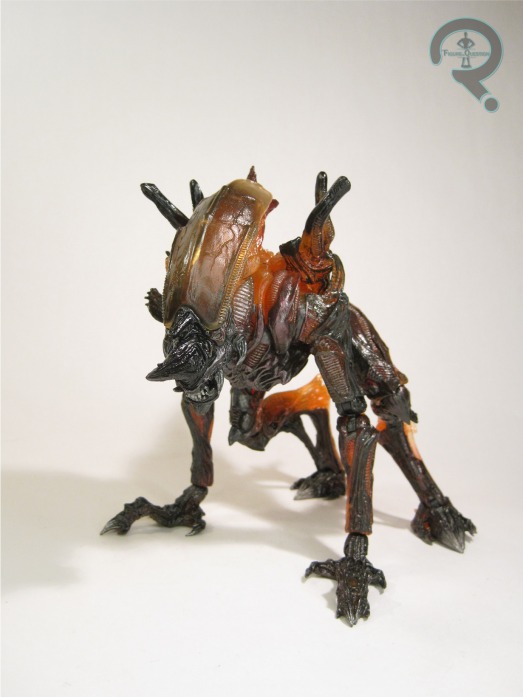 NECA’s Aliens used to be a rather frequent feature around these parts, but the line has slowed down a little bit as of late.  The core stuff right now has been a handful of one-off releases, largely centered around Kenner-inspired variants on previously.  A few months ago, I took a look at their Kenner-ized Drake, and now I’m jumping over to another one of the Xenos.  As I’ve no doubt brought up before on this site, Kenner took the concept of the Dog Alien from Alien 3 and really ran with it, creating all sorts of Xeno off-shoots.  NECA’s crafted a few of them in their 7-inch line, and the latest of the bunch is today’s focus, the Rhino Alien!

The Rhino Alien is a standalone release for NECA’s Aliens line, loosely meant to coincide with the Kenner Drake figure, though it’s at a different price point and in a totally different style of package than Drake.  It started hitting shelves not too long after he did, although due to some production errors I know he’s been rolling out a little more sporadically.  At full height, this figure’s a whopping 10 inches tall and has 34 points of articulation.  Of course, given that he’s based on one of the Kenner line’s quadrupedal Aliens, he’s not really meant for standing at full height, and is instead meant for posing on all fours.  Fortunately, the articulation works well enough to make both types of poses possible with this guy.  The hips can be a little tricky, but for the most part he’s pretty easily posed, and I don’t feel quite as worried about breakage as on other NECA offerings.  I’m still going to be slightly cautious, because I’ve been wronged before, but it does seem a little better.  In terms of sizing, this guy’s one of largest Xenos (barring the Queen, of course, which is in a class of its own), not just in height, but in bulk as well.  He achieves this through an all-new sculpt, and a pretty impressive one at that.  It’s somewhat patterned on Kenner’s own Rhino Alien, of course, but it’s worth noting that in terms of body construction, it seems to be taking more of its cues from Kenner’s Bull Alien.  The Kenner Rhino’s anatomy was a bit more further removed from the standard Xeno’s, while the Bull had something a little more in line with the Dog Alien’s merging of the Xeno with a quadrupedal design.  Ultimately, I think the Bull’s approach worked a little bit better, and as an added bonus, this leaves the door open for a possible Bull Alien later down the road, which would certainly not be a bad thing.  The quality of the sculpt is on par with NECA’s other Xenos, so the details are all quite sharp, and follow all of the broad strokes of the original Kenner figure, while also filling in some of those smaller parts.  The head dome has been designed to be removable, revealing a whole bunch of further details, which had been hidden under the dome.  This is probably NECA’s most impressive Xeno sculpt, honestly.  In terms of paint, the figure steps things up for Xenos.  He’s molded in orange, with black, brass, and some purples painted over top.  It makes for an incredibly impressive appearance, and looks pretty sick when it catches the light just right.  In addition to the previously mentioned removable dome, the Rhino also includes a reprint of the “Ice Storm” minicomic that was included with the original Kenner figure.  It’s definitely a fun read, but very much a product of its time.

I haven’t been quite as completist on the Kenner-tribute Aliens as I was the movie stuff, so there were a fair number I’d missed.  Because of that, I wasn’t 100% certain I’d be getting this guy, but after seeing him in person, it was definitely hard to say no.  It’s a very, very fun piece, and definitely the best of the Xenos I’ve gotten.  It’s just so much fun to mess with, and pairs off well with the Space Marines I’ve picked up.

Thanks to my sponsors over at All Time Toys for setting me up with this figure to review.  If you’re looking for NECA figures, or other toys both old and new, please check out their website and their eBay storefront. 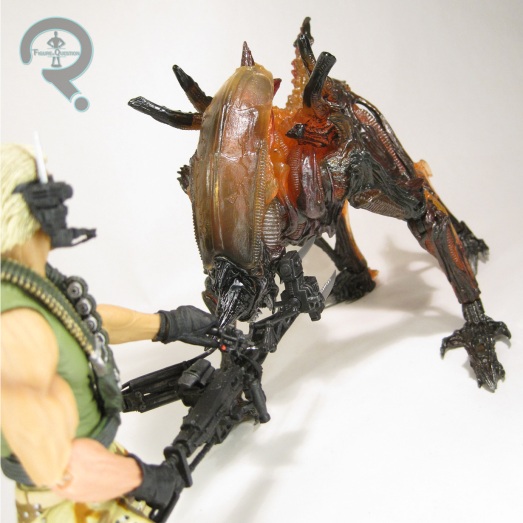