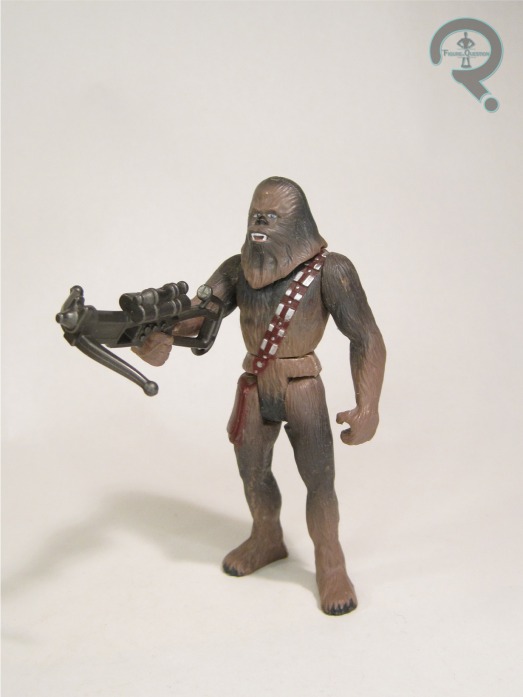 “As Han Solo’s partner, Chewbacca the Wookiee (or Chewie, as Solo calls him) distinguished himself as a talented pilot, starship mechanic and smuggler. After being rescued from Imperial slavers by Solo, Chewbacca pledged a life debt to the rogue pilot and followed him to several different planets as their relationship grew and the two became close friends and partners. When Solo acquired the light freighter Millennium Falcon, he and Chewbacca began their career as intergalactic smugglers. Chewbacca’s reputation as a brawler gave him a distinct advantage in shady business negotiations, and it was he who initiated the deal to transport Obi-Wan Kenobi and Luke Skywalker from Tatooine to Alderaan.”

Okay, so here’s something of an odd thing that slipped through the cracks of my review schedule: somehow, in all of the Power of the Force reviews I’ve written here on the site, I’ve managed to leave one single figure from the initial assortment un-reviewed for far longer than I realized. I speak of today’s entry, the line’s first take on Chewbacca, who has thus far escaped my reviewing focus.  Not to worry, dear reader, I’ve got him all set for today, so lets take a look at this crazy monkey man who really isn’t a monkey man!

Chewbacca was, as noted in the intro, part of Kenner’s first 1995 assortment for their revamped Power of the Force line.  He joined standard versions of Luke, Han, Leia, R2, C-3PO, Obi-Wan, Vader, Lando, the Stormtrooper, and Boba Fett in bringing Star Wars back to toy shelves for the first time in over a decade.  This would mark Chewy’s second time getting a 3 3/4-scale figure, following his old vintage release, placing him in the same category as Vader, the Stormtrooper, and Boba Fett.  The figure stands 4 inches tall and he has 6 points of articulation…technically.  There’s a neck joint there, but best of luck really getting any sort of motion out of it.  This guy got an all-new sculpt, which would serve as the basis for Chewy’s Shadows of the Empire figure as well. Chewbacca’s vintage sculpt was definitely on the scrawny side of things and…well, this one definitely goes for the other end of the spectrum.  Way on the other end of the spectrum.  This guy’s like two of the vintage guy.  Chewy may have been bigger than the other characters, but he wasn’t a body builder like this one.  He falls into a similar category to Vader, who was likewise a little on the small side for his vintage release, and then ballooned way up for his ’95 figure.  It’s downright goofy looking, and ends up making Chewy look a lot more simian than he did in the films, especially with that less shaggy, more carefully groomed appearance he’s got.  At the very least, the texturing on the fur isn’t too bad, though the bandolier isn’t quite so lucky; it looks stretched to fit Chewy’s new bulk, and ends up missing out on some of the better detail work of later versions.  The major details are there, but not much beyond that.  Chewbacca’s paintwork is fairly decent, perhaps the best of the initial batch, in fact.  He actually gets some nice accenting on his fur to give it its proper variations in color, a definite step up from the vintage counterpart.  Chewbacca was packed with both his usual bowcaster and also a more generic and definitely very ’90s gun, just in case one wasn’t enough for him.

Part of the reason Chewbacca got overlooked for review is because he kind of got overlooked in my collection, too.  As I mentioned in my Bounty Hunter Chewbacca review, that was my standard, and quite frankly, my go-to Chewbacca as a kid.  I didn’t actually have a basic Chewy; he was one of the figures that was in the batch of figures my Grandmother had for me and my cousin at her house.  It meant I got to play with one, but it wasn’t ultimately mine.  When the figures got split up between us, Chewy went with my cousin, and I never thought much about it, having moved onto better Chewbaccas.  When filling in my collection, I actually forgot about this figure, until managing to find one loose a couple of Christmases ago while on vacation.  I then forgot I had that figure and hadn’t actually reviewed it until I took it down off the shelf for the photo that ended my recent C-3PO review, at which point I got him onto the schedule as soon as I could.  And, here we are.  He’s not great, or anything.  He’s goofy and not very accurate, but also not as fun as the Bounty Hunter Chewy, so he’s just sort of here.