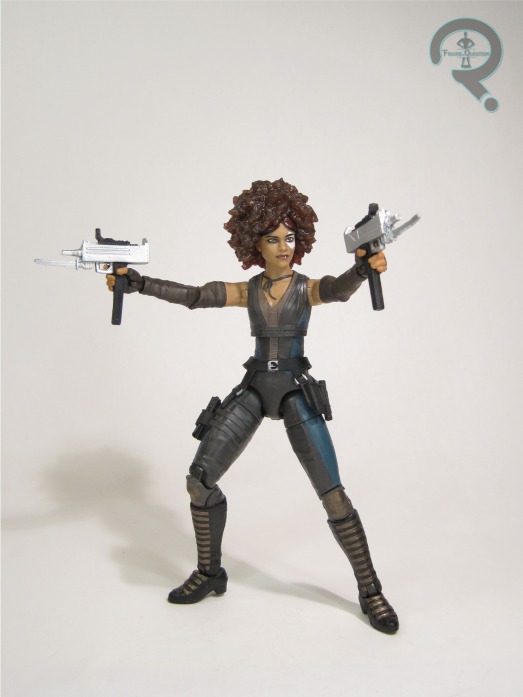 “With the mutant power to manipulate probabilities, the odds are always in Domino’s favor.”

Luck?  That’s her power?  Pretty sure luck’s not a super power.  I mean, what could luck as a power possibly do for you?  I mean, what’s gonna happen, is a character that’s B-list at best get a mass-release single-packaged figure from a movie where the title character and the arguable deuteragonist wound up in a two-pack and as a store exclusive respectively?  Wait, that’s…that’s exactly what happened.  Maybe luck’s a pretty good super power…which is my roundabout way of saying “let’s look at this Domino” figure. 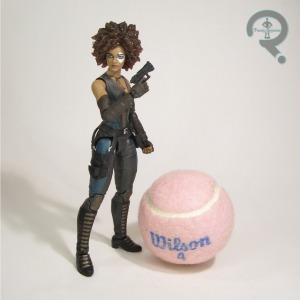 Domino is a single-release in the X-Men movie sub-line of Hasbro’s Marvel Legends.  She’s one of three standard release single figures in the line-up so far, the other two being Mystique and Wolverine, both of whom seem much further up the list than Domino, who completes the main Deadpool trio whose other two pieces are currently not quite as readily available.  What a weird set-up, right?  Hey, I’m really not going to complain too much myself.  The figure stands 6 1/2 inches tall and she has 27 points of articulation.  The articulation scheme is really solid here.  It’s not terribly far removed from prior Legends female base bodies, but the range on the joints is generally a lot better, and they’re very well toleranced, meaning she keeps the poses without too much trouble.  She also stands pretty well, which is always a plus in my book.  The sculpt is an all-new affair, patterned on Domino’s main action-oriented appearance in Deadpool 2.  She’s got two different head sculpts,  one standard and one with goggles.  Both have a pretty solid likeness of Zazie Beetz, but I personally find the one with the

goggles has just a touch more personality to it, and is subsequently my preferred of the two.  The body sculpt is fairly realistic and well-balanced in terms of proportions, and the detail work is nice and sharp.  Her costume details all look to be fairly spot on, and the articulation is well integrated.  In terms of paint work, I find Domino has a bit of a leg up on Cable, whose paint was a little uneven.  Here it’s pretty strong from start to finish, with clean work on both faces, as well as all of the important details being covered on her costume.  In particular, I really like the hair, which has been molded in a semi-translucent plastic and then been given some accent work on top of that.  It really helps to prevent the usual unnatural thickness that occurs with fuller hair styles, and allows light to pass through in a quasi-realistic way.  In addition to the previously mentioned extra head, Domino includes two sets of hands (gripping and fists), two MAC 10s, and a pistol.

When Domino’s look was first shown off back before the movie’s release, I was a little iffy on some of the design choices they’d made, as I felt there were definitely some shortcuts taken that made her less of a comic-accurate creation than Deadpool himself had been in the prior film.  Because of this, I wasn’t sure what I’d think of this take on the character.  Then I saw the movie, and I was really impressed with Beetz’s take on the character, and she was ultimately one of my favorite aspects of the final product.  I was definitely happy to see her show up among the earliest X-Men movie stuff, and I’m even happier that the figure’s as solid a final product as it is.

Thanks to my sponsors at All Time Toys for setting me up with this figure for review.  If you’re looking for Marvel Legends, or other toys both old and new, please check out their website and their eBay storefront. 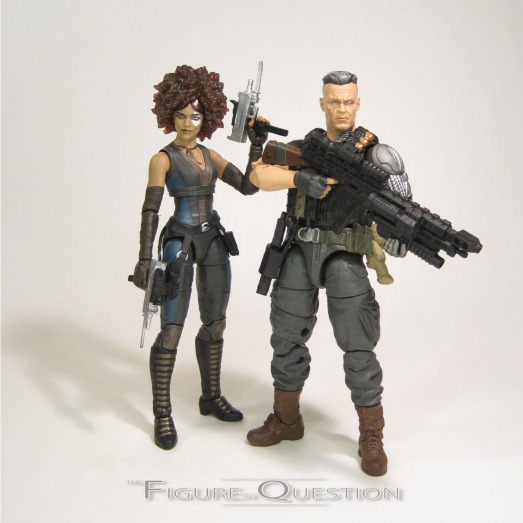