“Five years after the Battle of Endor, the Rebel Alliance has driven the evil Empire into a distant corner of the galaxy. But a new danger has arisen: the last of the Emperor’s warlords has devised a battle plan that could destroy the New Republic. Before the death of Palpatine, Mara Jade was the Emperor’s right hand assassin. Five years later and now a successful smuggler, the last thing Mara expected was to stumble upon her former arch-enemy – Luke Skywalker.”

The Star Wars Expanded Universe had a whole host of new characters to add to the mythos, coming from all sorts of different mediums, and doing all sorts of, some times, contradictory things.  A few of those EU characters because rather pervasive, but few were quite as recurrent as Mara Jade, a character who appeared about just every medium other than the movies.  Destined to become Luke Skywalker’s eventual wife, Mara was revealed to be just on the outskirts of plenty of prior events, just waiting to peer into the shot, I suppose.  She’s become rather downplayed since Disney took over, of course, but she was pretty big with the fanbase, and did get a few action figures, the first of which I’m taking a look at today.

Mara Jade was released alongside the rest of the initial Expanded Universe line-up of Power of the Force figures in 1998.  As such a popular character, she was a rarer figure from an already scarce assortment, at least at the time.  She was one of the three figures in the line-up to be based on the Heir to Empire story, fittingly Mara’s first appearance.  The figure stands 3 3/4 inches tall and she has 6 points of articulation.  Mara’s sculpt was unique to her, and based at least somewhat on her appearance in the Heir to Empire comics adaptation, though it’s mostly in regards to her attire, since her features don’t match the rather stylized depiction of the character from the comics.  Neither was she really based on Shannon McRandle, the model who portrayed Mara on the covers of the novels she appeared in.  Instead, she’s just sort of an averaged appearance, I suppose.  It works fine for the character, and it’s not like she’s any further from her usual appearances than any of the characters who actually appeared in the movies were.  Mara’s paint work is rather eye catching, especially the bright red hair, and the application is all pretty clean.  They did actually differentiate between the black of her body suit and her boots, so that looks pretty nice.  Mara is packed with Luke’s lightsaber, a blaster pistol, and another 3D backdrop like the rest of the series.  This one shows off a downed ship, and is definitely one of the cooler backdrops.

I didn’t know anything about Mara when these figures were new, and I certainly didn’t really see her in person to push me to find out.  As I’ve become more versed with Star Wars over the years, I’ve of course come to know a bit more about her, and I’ve been subsequently more invested in these figures.  I picked her up at the same time as most of the rest of the set, when they all came in through All Time.  Mara’s a pretty cool little figure.  Perhaps not the flashiest of this line up, but a fun and unique figure nevertheless. 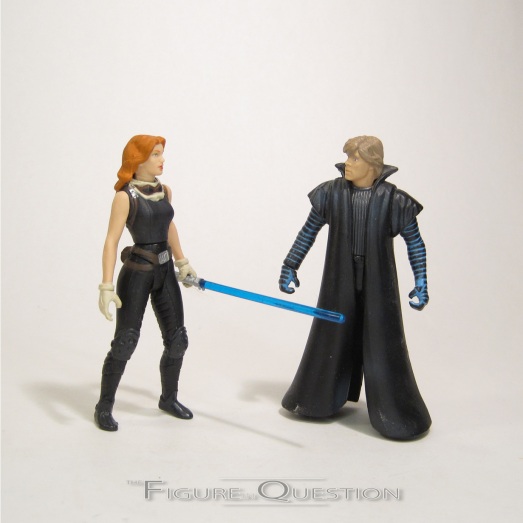