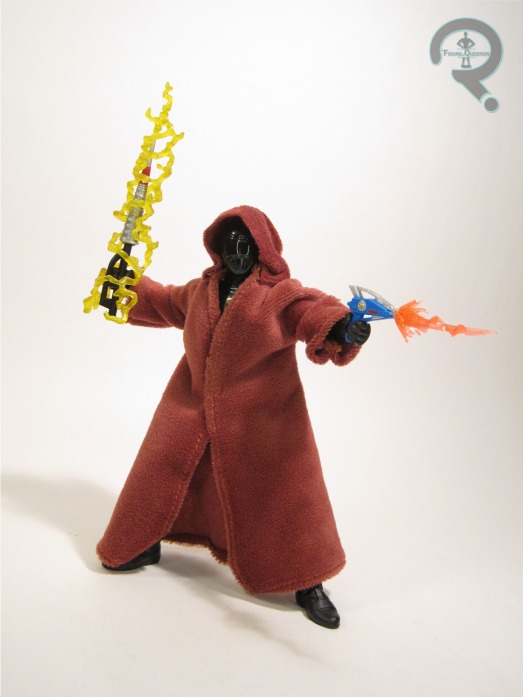 The continuing narrative of the first six years of Power Rangers, and its conclusion in Power Rangers In Space allowed for a slightly different structure to the show’s first episode.  Since most of the team had already been introduced in the preceding season, the show places its main focus on the one new member of the team, Andros, the season’s Red Ranger.  We first encounter him on a recon mission spying on a gathering of villains from prior seasons, which requires him to have a more incognito appearance, at least at first.  It’s a design that has as of yet not gotten any toy coverage, but Hasbro’s addressing that here, with the figure I’m taking a look at today.

Andros in Disguise is a Target-exclusive one-off release for Power Rangers: The Lightning Collection.  Or he’s at the very least an exclusive to Target for now.  It’s a slightly confusing situation, as has been the case with a handful of releases from Hasbro recently.  Photos of him showed up with no official announcement, and then Hasbro themselves showed him off, but with no actual mention of release plan, and no mention of any exclusive status.  And then he just showed up on Target’s website, and was very quickly in-stock, making the whole thing a rather surprisingly quick turn around.  The figure stands about 6 inches tall and he has 34 points of articulation.  Structurally, his actual sculpt is identical to Andros in his Red Ranger gear (and all of the other male Space Rangers, for that matter).  It’s a sculpt that gets the job done, and it matches up with the other Andros, so it makes sense.  The main structural change up is the addition of a cloth robe piece for him.  It kind of looks like a bath robe, which I don’t really think is the intended 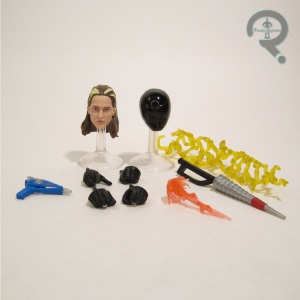 appearance.  It’s a little goofy looking, especially in the photos, but I’ll admit it looks a fair bit better in person than I’d expected it to, and actually holds shape pretty well.  Even the velcro on the front stays secure, which isn’t always a guarantee.  The color work on this guy is another notable change up. Technically, in the show, he’s just wearing his usual Red Ranger gear under the cloak, but it’s shot in a way that hides it in the shadows.  To simulate this, Andros is wearing all black this time.  It’s an interesting look, and the presence of extra gold accenting, especially the insignia on the front, makes it feel like this is an established design from elsewhere.  That being said, I don’t know specifically where, and my brief searching on the internet hasn’t turned anything up.  So, I guess it’ll just remain a mystery.  It certainly looks cool, though.  Andros is packed with two heads, one helmeted (and in all-black to match the main figure), and one unhelmeted (re-used from the prior release), as well as two sets of hands, his Spiral Saber, Astro Blaster, and effects pieces for both weapons.

This is an odd release, and certainly not one I really thought I would need.  That said, In Space is my favorite incarnation, and there’s very little I wouldn’t buy from it.  So, this guy was certainly on my radar, not that I was in a rush or anything.  Max actually wound up ordering one online, before managing to find one in store.  Since he didn’t need two, he was kind enough to set me up with the spare.  He’s not essential, and it’s not like he really does anything new, but he’s a rather fun one-off variant.