“Kamala Khan is 16 years old, good at school, and bad at fitting in. But when she unexpectedly develops super-powers, she’ll learn that what makes her different makes her powerful.”

Introduced in 2014, partially as a way to hang onto the “Ms. Marvel” title after Carol Danvers got promoted to Captain, Kamala Khan’s been something of a breakout character for Marvel.  She’s been consistently headlining her own comic since her launch, and rather quickly made the jump to both animation and video games.  Just this year, she also made her debut in the MCU, with her own self-titled Disney+ show.  Iman Vellani’s turn as Kamala was absolutely the highlight of the show, and I’m looking forward to seeing her interacting with the rest of the MCU in The Marvels.  Until then, I guess I’ll just make do with her Legends equivalent, which I’m looking at today.

Ms. Marvel is figure 2 in the the Infinity Ultron Series of Marvel Legends.  She’s the only figure from her show in this line-up, and is more than likely the only figure we’re likely to get from her show in general, since there aren’t a ton of toyetic designs to adapt.  This marks Kamala’s third time as a Legends release, which isn’t bad at all for a more recent addition to the lexicon.  She’s sporting her full costume from the show’s finale, which is honestly one of the MCU’s best adaptations of a comics design.  Apart from some slight punch-up on some of the line-work, and swapping the boots for sneakers.  The figure stands 5 3/4 inches tall and she has 27 points of articulation.  She’s got one of the more restricted articulation schemes for this assortment; part of it just comes down to design, since the skirt, long hair, and scarf all provide a fair bit of restriction.  It’s not awful, just not quite up to the very impressive standards of the rest of the assortment.  Ms. Marvel is sporting an all-new sculpt, and it’s not bad, but it’s not one of this set’s strongest, at least in terms of accuracy.  The likeness on the headsculpt doesn’t have much of Iman Vellani in it; the face doesn’t seem round enough, and the lines make her look a fair bit older than she should.  The hair is also rather flat, 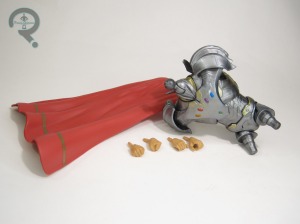 which doesn’t help the shaping issues.  The body is also a bit on the skinny side (a common theme for the women in this assortment, honestly), which only further highlights the issues with the likeness.  The actual detail work isn’t bad, though.  There’s a lot of decent texturing and sharp line work; at the very least, the costume design is pretty accurately handled.  Ms. Marvel’s color work is generally decent, but not quite 100%.  They went for metallics on the suit, which isn’t bad, but it winds up a little bit muddied in practice.  The golds in particular are a bit too dark, which I think just really throws the rest of the look off.  Just not quite enough pop there.  The application on the paint is at least pretty cleanly handled, and the whole thing does have a nice polish to it.  Ms. Marvel is packed with two sets of hands, in gripping and fists, as well as the torso and cape of Infinity Ultron.  Curious that she didn’t get any energy effects pieces, but I suppose they didn’t want to poke that particular bear again.

As I’ve brought up before, I’ve been following Kamala since her first appearance in the comics, and I thoroughly enjoy the character, so I was definitely down for her being added to the MCU.  Her show didn’t quite click with me the way some others have recently(but I’m not really in its target audience, so that’s totally okay), but as I mentioned in the intro, Iman Vellani’s performance in the lead role was still really, really strong.  Unfortunately, in terms of the toy coverage, this one’s not quite it.  It’s not a bad figure, but it’s not a particularly accurate figure, and it just doesn’t stick the landing for me the way the comics version did.