“A skilled warrior, Axe Woves is loyal to Bo-Katan and is a member of a band of Clan Kryze Mandalorians striking back at the Imperial remnant”

When Bo-Katan Kryze made her first appearance in live action during The Mandalorian‘s second season, she was accompanied by two other Mandalorians: Koska Reeves and another guy.  Today, we delve into the other guy.  Okay, the other guy actually does have a name: it’s Axe Woves.  That’s a name that’s really just peak Star Wars naming, honestly.  And it really should be, since Axe was actually named by none other than George Lucas himself, who named Bo-Katan’s then un-named Lieutenant during a set visit whilst Season 2 was in production.  Unlike Koska, who re-appeared alongside Bo-Katan for Season’s finale, Axe has thus far only appeared in the one episode, but is rumored for a Season 3 return.  Perfect time for some action figure coverage.  Let’s take a look at that, shall we?

Axe Woves is part of the first main assortment of Star Wars: The Black Series‘s 2023 line-up.  Clearly, he’s a little early.  It’s okay, so’s pretty much everything else.  He’s part of the Mandalorian sub-set of the line, of course, and he’s figure 25 in that numbering scheme.  The figure stands roughly 6 inches tall and he has 28 points of articulation.  In terms of construction, Axe is largely built on the bank of parts first seen on the Death Watch Mandalorian from earlier this year.  He keeps the same articulation scheme from that release, which is to say that he poses pretty well, and certainly on-par with a modern Black Series figure.  Axe gets two new pieces thrown into the mix, a new un-helmeted head and a new belt/lower abdomen add-on.  It’s otherwise just the Death Watch Mando, which is fair, since there are a number of shared armor pieces between the two.

The new head sculpt bears a passable resemblance to actor Simon Kassianides (who, it should be noted, has an oddly close resemblance to the Saga-era Jango Fett head sculpts), though it’s not as spot-on as other sculpts in the line.  Axe’s paint work pretty decent for the most part; it’s on par with other recent offerings, and there’s some rather nice weathering to the armor.  The only slight misstep is the face paint, which, at least on my copy, has the eyes set ever so slightly higher than they should be.  It’s not crazy, but it’s definitely off.  Thankfully, amongst his accessories is his distinctive Mando helmet, which is a re-use of newer Boba Fett mold.  It doesn’t sit quite as well on this figure’s head, but it overall works.  He’s also packed with his jet pack and a small blaster pistol, both of which are re-used molds.

Once we had both Bo-Katan and Koska, it was just a waiting game for Axe, since it’s not like they’re gonna leave one Mando undone, right?  Axe is exactly the sort of background character that would fascinate me in older Star Wars entries, and that came through on the newer stuff too.  I dig his look, I dig his name, and I dig the background behind it all.  He’s not a perfect figure, but he’s a pretty fun one, and a good by-the-numbers offering. 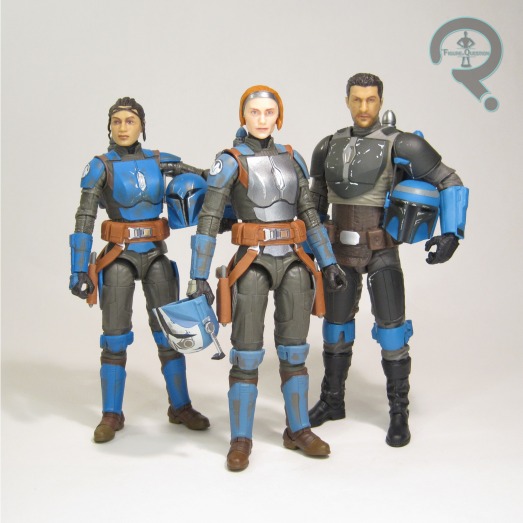