“A houndmaster from a future timeline in which mutants are hunted down and destroyed, Ahab has time-traveled to the present to continue his mission of eliminating dangerous mutants. Employing advanced Sentinel technology in his powerful cyborg body, Ahab ruthlessly enslaves those mutants he does not kill, transforming them into telepathic hounds which he uses to track down others of their kind. Only the combined powers of the X-Men, X-Factor, the New Mutants and the Fantastic Four were able to put a stop to Ahab’s murderous rampage through our time in the past. Should he reappear, who knows what havoc he might wreak!”

You know how sometimes there’s bad figures of good characters?  Or, on the flip side, good figures of bad characters?  Today represents neither of those things.  Today, I look at what might be one of the very worst figures ever released in Toy Biz’s 5-inch X-Men line.  He’s a little figure by the name of Ahab.  Let’s just get straight to it, shall we? 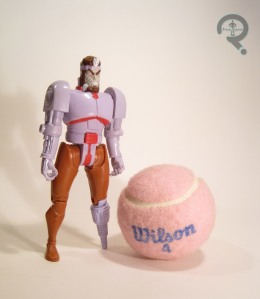 Ahab was released in Series 5 of X-Men.  In a series populated by fan-favorites, he’s…well, he’s not.  He’s an odd choice for the set, and the line in general really.  I mean, I guess he was involved in some semi-important stories in the comics.  But, given that one of the characters completely absent from Toy Biz’s entire run was Rachel Summers, who’s sort of the only reason Ahab matters at all, he feels out of place.  Maybe there’s a big Ahab fanbase out there or something.  I don’t know.  Anyway, the figure stands a little over 5 inches tall and he has 6 points of articulation.  For reasons I’m not entirely sure of, he lacks neck and elbow movement, which makes for a very stiff figure.  Already not the greatest start.  Ahab has what has to be one of the clunkiest sculpts of any figure in this line.  I genuinely don’t know how they managed to mess him up this bad.  I mean, he’s hardly got the greatest design in the comics, but it’s better than this, to be sure.  Everything about this figure is blocky, stiff, and inorganic.  That’s fine for the blocky, stiff, and inorganic parts, but not so much for the parts that aren’t those things. His head is particularly bad, given it’s incredibly thin, tall look, and complete lack of neck.  He’s got this sort of cyborg-zombie-Abraham-Lincoln thing going on, and the sculpt doesn’t seem to be able to decide what’s his hair and what’s his headgear.  They just sort of meld together. He’s also got this look on his face like he just crapped his pants.  Which, in a gross way, leads me to my next complaint: his legs.  Or, more specifically, his hips, which are oddly shaped, not particularly accurate to his comics design, and start a considerable distance after his torso ends.  Ahab’s paintwork is decent enough for what it is. It’s pretty basic, and far from the most appealing color scheme.  Burnt sienna and lavender isn’t exactly an imposing combo.  Also, we get the same issues the sculpt had with the hair/headgear changeover, which just sort of…happens.  The figure was originally packed with a missile launcher and three “harpoons,” which I don’t have.

So, if I hate this guy so much, why do I own him?  Is he another gift from a confused family member?  Nope, he’s actually a pretty recent acquisition.  In the last few months, I’ve decided to try and complete my ‘90s X-Men collection.  That meant I was gonna have to get this guy eventually.  I found this one at Yesterday’s Fun for $1, which is really about the cap of how much I’m willing to pay for him.  He’s an awful figure.  Just awful.  But, I like to look at the positives: the collection only improves from here!