“The spiritual leader of the Eternals, Ajak can heal others and is able to communicate with the Celestials.”

Eternals, like a lot of recent MCU stuff, has its main tie-in assortment that’s at mass retail, and then a few off-shoots to that main assortment, with two in particular being store exclusive offerings.  I’m looking at the first of those two today.  Ajak was introduced in Jack Kirby’s second issue of Eternals, with his primary role being that of communicator to the Celestials.  For the purposes of the film, the now female Ajak, played by Selma Hayek, is still the communicator to the Celestials, but also serves as a more direct leader for the Eternals on Earth, given their more cohesive team nature in the film. 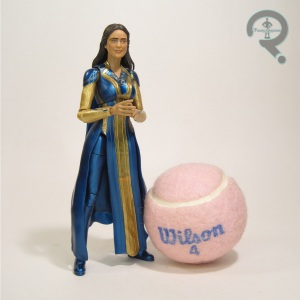 Ajak is a Walmart-exclusive Marvel Legends release, who hit at roughly the same time as the main Eternals assortment.  I normally decry characters being made Walmart-exclusive, but Ajak is actually not a bad choice for the exclusive treatment.  Her role in the film is certainly an important one, but it also has her removed from the rest of the group, and therefore the separate releases honestly makes a little bit of sense.  I’d still prefer no exclusives, but it one of them was destined for this role, she’s the right choice.  The figure stands about 6 inches tall and she has 27 points of articulation.  Her articulation scheme is pretty much the same as the other female figures, though, like Druid, the design of her skirt means that most of her leg articulation is greatly restricted.  She’s an all-new sculpt, based on her design from the movie.  Ajak’s design in the comics keeps some of the

broad-strokes elements and silhouette of the comics character’s design, but makes it something a bit more streamlined, as well as more within the general theme of the other movie Eternals designs.  The sculpt does an alright job of translating it.  The head has a decent Selma Hayek likeness, certainly on the higher end of the likenesses in the set.   It does sit a little bit funny on the neck joint, but it’s otherwise not bad.  The paint work on the figure is generally pretty alright.  It’s fairly cleanly applied, and there aren’t any notable misalignments like on some of the other figures, which is certainly a plus.  Ajak is packed with an alternate head without the helmet piece, as well as two sets of hands, in fists and open gesture.  The alternate head also has a respectably Hayek likeness, and even sports a slightly friendlier expression than the standard.  She still gets no effects or anything, but at this point it’s not really a surprise or anything.

I’m not in a rush to get anything that’s a Walmart exclusive, because that would require either stepping foot in a Walmart or trusting Walmart’s website, and none of those is a pleasant experience.  So, I was content to play the waiting game with Ajak.  As luck would have it, I didn’t really need to, because just a few short days after getting my standard release set, someone brought a whole set of Eternals, including Ajak, into All Time.  It’s hard to pass on something when it literally just walks through the door for you, so, hey, I got an Ajak, no muss, no fuss.  After seeing the movie, I was certainly glad, because Ajak’s a cool character, and she makes for a pretty cool figure as well.