MASTERS OF THE UNIVERSE: MASTERVERSE (MATTEL)

Hey, let’s just keep this Masters of the Universe train rolling here, shall we?  Thus far this week, I’ve taken a look at two of the Evil Warriors in their Revelation incarnation, but none of the heroes.  So, let’s change that.  Introduced as one of three new Heroic Warriors in the 1984 line-up of the vintage line, Fisto was dubbed the “Heroic Hand-to-Hand Fighter,” due to his…you know…fist?  Fisto’s got a few appearances in each major iteration of the franchise, which is more than a lot of characters can say.  Revelation keeps his streak running, with a cameo during the first half, and a proper (if brief) appearance during the show’s second half.  And he also got a figure surprisingly early in the new line’s run, which seems like a good stroke of luck for him. 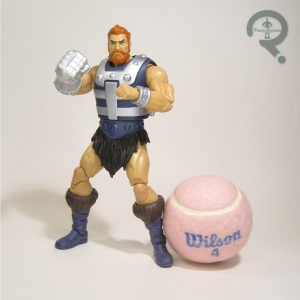 Fisto is part of the third assortment of the main Masters of the Universe: Masterverse line.  Fisto made use of his classic design in both halves of Revelation, meaning there’s just the one look to choose from.  Thankfully, it’s a pretty strong look through and through, as it always has been.  The figure stands about 7 inches tall and he has 31 points of articulation.  His movement is largely the same as the rest of the line, apart from getting a swivel at the wrist and the top of the forearm, rather than the universal joint on the standard wrists.  Fisto is based on the standard barbarian body, as he usually is.  He gets a new head, right forearm and hand, as well as a new overlay piece for his chest armor.  The head does a great job of capturing the animation design, which is a fun update on his classic look.  I like the very angular and

exaggerated features. The new hand is fun, largely because it’s made from die cast metal, which gives it a nice sense of heft.  The chest armor is a little looser than other armor pieces, but it works well for the design.  I also look forward to seeing its inevitable re-use for Clamp Champ, who’s the real MVP.  Sorry, I’m getting distracted by the prospect of a Clamp Champ.  That’s not fair to Fisto.  He’s cool and ridiculous, too.  The paint work on Fisto is okay overall, though he’s got some notable coverage issues on the front of the chest armor.  Otherwise, the application is pretty clean, especially on the face.  Fisto is packed with his sword (shared with Tri-Klops), as well as three different left hands, in fist, gripping, and relaxed.

I wasn’t initially sure about grabbing Fisto, since I was planning to just stick to the post-time-jump characters.  Then the second half of the show dropped, and Fisto’s role was fun enough that I found myself really digging the new version of the character.  The figure turned out pretty well.  I like the new head sculpt a lot, and the die cast fist really sells the whole “Fisto” angle really well.  As far as the basic line goes, Fisto certainly ranks pretty highly.