The Crime Syndicate is a fairly simple concept.  They’re just an evil version of the Justice League.  Pretty straight-forward stuff.  That’s probably why, even after multiple attempts by DC to abandon the whole Multiverse concept, this group is always pretty quick to turn back up.  They’re actually a bit less frequent than you might think when it comes to toys, though.  Despite first appearing in 1964, it wasn’t until 2003 that they got their first action figures.  I’ll be looking at the first figure of Flash-equivalent Johnny Quick* today. 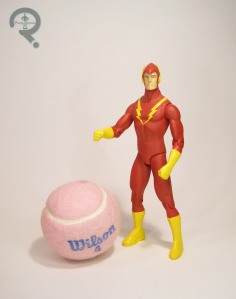 Johnny Quick was released in the one series Crime Syndicate line from DC Direct.  He’s based on Johnny’s classic design, which is a pretty straight forward take off of the Flash’s design (though not as straight-forward as the *other* evil Flash equivalent, the Reverse Flash, who pre-dated Johnny by a year).  The figure stands 6 inches tall and has 9 points of articulation.  Not a lot of movement, and he’s really only good for a basic standing pose, but this was pretty standard for DCD figures of the time.  Johnny pre-dates DCD’s move to artist-specific figures, so he’s instead patterned on DCD’s then current house style.  It’s a style that works especially well with silver age characters like Johnny.  The figure’s sculpt is basic and clean.  He’s not too bulky or too skinny.  Most of his costume details are painted, rather than sculpted, so his head is where most of the important work is.  It’s a decent enough sculpt, but I do wish his expression was a bit less bland.  Johnny was prone to his maniacal laughing and the like, so an evil grin really would have really hit the spot.  The others in this assortment were a bit more emotive, so poor Johnny was just left out in the cold.  The paint work on Johnny is clean, and the colors are bold.  His red/yellow were well-matched to the Flashes that DCD had available at the time, which was a plus.  Nothing particularly notable or exciting beyond that, but hey, passable is still passable.  Johnny’s only accessory was a Crime Syndicate logo-emblazoned display stand.

Acquiring the Crime Syndicate figures was a rather slow process for me, despite my excitement for them when they were announced.  Johnny was the fourth one I picked up, actually a few years after his release.  Despite having long since sold out of their initial quantity, Cosmic Comix had gotten in another of this guy, and I ended up grabbing him during a sale (I think it was for Free Comic Book day, but I could be wrong).  He’s an okay figure.  Not perfect, but he’s definitely a solid offering, especially for the time.

*not to be confused with DC’s heroic speedster, John “Johnny Quick” Chambers, an Earth-2-based hero from the ‘40s.