Despite a pretty solid fanbase who seem ripe for buying cool collectibles, neither Tron nor its sequel Tron Legacy have ever had much luck in the world of toys.  The original film had a small line of figures from TOMY at the time of its release (with some re-releases many years later from NECA), but not much else.  Fortunately, Tron made its way into the Kingdom Hearts franchise, which itself has been getting a lot of toy coverage recently.  Among that toy coverage was Tron’s title character, who I’ll be taking a look at today. 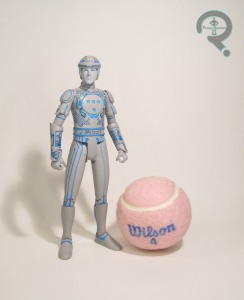 Tron was part of Series 3 of DST’s Kingdom Hearts toyline, available two differing ways.  The specialty release included a Space Paranoids Goofy as well, but there was also a streamlined release at mass retail set-ups (like GameStop), which is the one I picked up.  The figure is technically based on Tron’s game design, which is, of course, just a slightly stylized version of his design from the original film.  The figure stands 6 3/4 inches tall and has 26 points of articulation.  The sculpt is unique to this figure, and is a reasonable offering.  If you’re experienced with DSTs Select style figures, then Tron’s pretty standard faire.  His articulation is somewhat on the restricted side, but not terrible.  The stylization really shows up in the arms and the feet, where the proportions are a little bit on the exaggerated side.  The arms are kind of skinny and the feet kind of large.  The rest of things are pretty well matched to the film design, and he’s even got a halfway decent likeness of Bruce Boxleitner on the face.  What details the sculpt doesn’t cover, the paint does.  True to the film, he’s rather monochromatic, being grey with blue accents.  The tech-y details outlined in blue look pretty sweet, and their nice and crisp.  There’s a little slop on some of the lighter blue accents, but for the most part it works out okay.  Tron is packed with one extra: a Heartless Soldier minifigure.  It’s distinctive from prior Soldiers in coloring, but ultimately of little interest to me, since I was just in it for the Tron figure (which is why the Soldier is already in someone else’s collection).  Tron doesn’t include his disk, which is a bit of a shame, but not a huge shock coming from a line that doesn’t always give Sora his keyblade.  I suppose making one of your own wouldn’t be too hard.

I have no real attachment to anything Kingdom Hearts, but I knew I wanted this guy as soon as he was shown off.  I initially thought I was going to have to pony up for the larger set, but I found this guy at a GameStop a few weeks ago, which made me pretty happy.  He’s not without his flaws.  The articulation could be a little better, and the lack of disk is annoying, but he’s pretty decent for what he is, and honestly he’s the best Tron figure you can get.