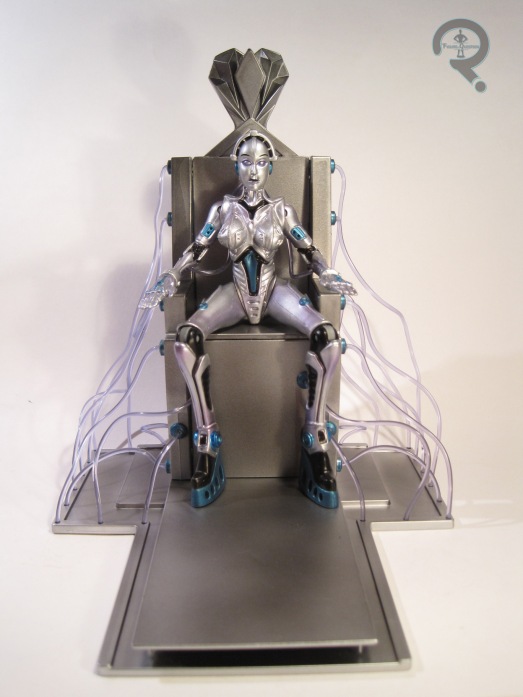 What’s this? A silent film character on this site? What, am I trying to inject some culture or something?

As surprising as it may be, my interests do actually go beyond modern day entertainment and action figures. I love me some old silent movies, Fritz Lang’s Metropolis in particular. That movie’s got a lot going for it: cool dystopian setting, art-deco look, underground civilizations, gripping fight scenes, a crazy mad-scientist, and one of the coolest freaking robots of all time! Maria, the robot who became the film’s signature character(who actually stole the name from the film’s female protagonist. It’s Frankenstein all over again!), would go on to influence a number of other robots, with Star Wars’ C-3PO probably being the best known. She’s received a few pieces of merchandise over the years, including an action figure, which I’ll be looking at today! 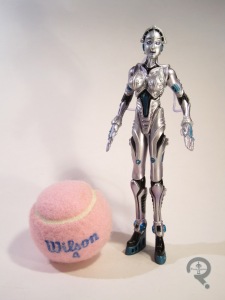 Maria was part of the second series of Silent Screamers, dubbed Reel Masters line, and released in 2000. Interestingly, while this series was released by Mezco, the first series was actually released by Aztech Toys. Aztech ended up splitting into two separate companies, Art Asylum (creators of Minimates, among other things) and Mezco. So, this series ended up being one of Mezco’s very first products. The figure is about 7 inches tall and has 13 points of articulation. While she is ostensibly based on her robotic appearance from Metropolis, Maria’s design has definitely been tweaked a bit for this figure. The original Maria design is kind of a classic for a reason, so changing the design is shaky ground to stand on at best. Mezco opted to go for a more modern design aesthetic, or at least an early 2000s design aesthetic. In the film, Maria’s look was built around an actual person, so she definitely wasn’t rail thin. Here, however, Mezco is taking advantage of the fact that there isn’t a person inside the figure, so they can give it whatever proportions they like. So, this Maria is really tall and quite lanky.  That’s a reasonable change. However, for some reason, they’ve also given her a pair of rather large breasts, and a pair of crazy high-heeled/platform shoes, which don’t really work well with the design, since Maria’s not really supposed to be overly-sexualized, especially not while in her robot form. Her face has also been tweaked to be more human, which kind of deprives the figure of the necessary cold, steely look.  In addition, the general retro-y, art-deco nature of Maria’s original design has been tweaked, to look a bit more like something that wouldn’t look completely out of place in, say, an early Image comic. The end result is a sculpt that is still clearly Maria, but just feels really off. On the plus side, her paint is actually pretty cool. She’s mostly silver; for some reason, I had always assumed she was gold, but I guess silver’s reasonable. She’s also got some blue accent work, which looks pretty sharp, and looks pretty nifty next to the silver. Maria includes the chair used to bring her to life. Like Maria herself, its design has been tweaked a bit, though nowhere near as much. The chair and stand need to be assembled once removed from the box, and those tubes are a bit of a pain to get into place, but the end result looks pretty cool. Plus, the figure ends up looking a fair bit better sitting in the chair than she does standing. The only real downside is that she has to sit with such a wide stance, due to her hip joints.

I’ve been a pretty big fan of Maria from about 5 years old or so, even before having seen Metropolis (in fact, I saw Metropolis because it was the movie in which Maria appeared). My dad had one of the Maria statues, which I always though was pretty cool. I remember this figure being released, but I don’t think I ever saw it in a store, so I never got one. I ended up getting her as a birthday gift from my pal Phil just this past year. This figure’s far from perfect, but she’s also the only action figure of Maria on the market, and she’s not the worst thing ever. If you’re a fan of Metropolis or cool robots, you could do a lot worse.