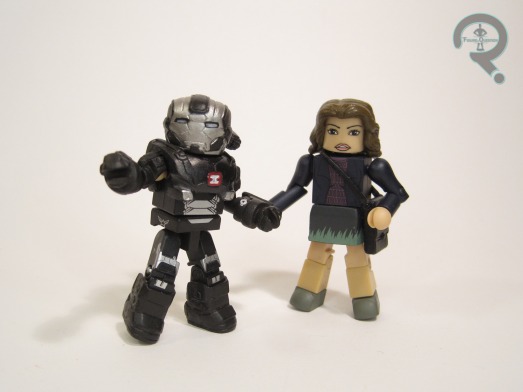 Now listen up, here’s the story, about a little guy who..isn’t content to not review a War Machine this week.  So, yeah, I’m pulling out an MCU set, going back to Iron Man 3 for a look at War Machine and pack-mate Maya Hansen!

This pack was part of Series 49 of Marvel Minimates, the specialty component of the Iron Man 3-tie-in ‘mates.  It’s one of the two sets contained there in which was completely exclusive (although War Machine didn’t really feel all that exclusive after the three nearly identical releases that followed). 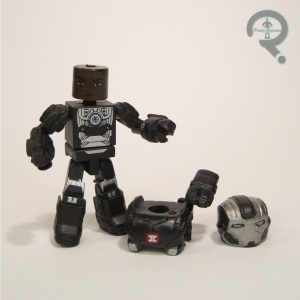 The actual War Machine armor doesn’t appear in Iron Man 3 proper, but it did figure prominently into the merchandising, and has a somewhat minor role in AoU. It’s just the same as his Iron Patriot armor, but done up in his more traditional War Machine colors.  Structurally, this figure’s the same as the Iron Patriot ‘mate. He’s got add-ons for the helmet, torso piece, waist, upper arms, boots, and gloves. I thought the armor looked just a bit pudgy on that figure, and I still feel that’s the case here, but it’s not horrible at all.  I think it’s really the helmet that throws it off.  His paint is pretty decently handled.  I do quite like the Air Force linsignias from the gloves, and his facial likeness works pretty well for Cheadle.   War Machine includes the usual clear display stand. 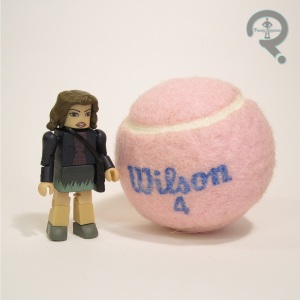 Maya was a moderately prominent character in the comics, especially at the time of the Extremis arc, so she was a sensible choice for the movie.  Of course, she doesn’t really do a whole lot in the movie, but as Extremis’ creator, I think she earned her spot here.  She has three add-on pieces, one for her hair, one for her skirt, and one for her purse.  All three parts are re-used, but they work for her look, so its sensible.  They’re well-sculpted, and the hair in particular is one I quite like, so I’m always down for seeing it crop back up.  Maya’s paintwork is solid work.  It’s clean, and she’s actually rather colorful for a civilian.  The funky pattern on her skirt certainly helps things.  Her likeness is actually a pretty surprising match for Rebecca Hall, especially given how simple it is, but it turned out quite well.  Like Rhodey, Maya’s only accessory is a clear display stand, but I’m not sure what else she could have been given.

As with most Minimates of this vintage, I picked these up the day they were released from my local comic book store, Cosmic Comix.  I recall getting the whole set on a run to the store in the middle of a day of classes, and then carrying them all around in my bag while wandering around campus that day, opening them up one set at a time as I had the chance.  War Machine is a sensible case for parts re-use, and is a pretty solid figure.  Of course, he’s a little harder to like in light of the three almost identical releases we’ve gotten since, but that’s hardly this figure’s fault.  Maya’s far from the most thrilling figure in the set, but she’s also not the most boring, so she exists in a nice middle ground.  Ultimately, this set’s probably the least spectacular of those included in the line-up, but it’s not a bad one.