My relationship with The Walking Dead is a strained one. Shortly after discovering Robert Kirkman’s Invincible, I decided to track down a few of the other things he’d worked on. This of course led to The Walking Dead. I quite enjoyed it, for about 99 issues. Then, I read issue 100, and my interest in continuing reading stopped dead. This had the unfortunate side effect of turning me off of the line of comic-based Minimates just two series in, meaning I missed out on a few of the principle characters. But there was one character I knew I couldn’t miss: Carl.

Carl and the Burning Zombie were released in Series 6 of The Walking Dead Minimates. I know that there was originally meant to be a TRU series to go along with this one, but TRU backed out, leading to a bit of consolidation. I can’t remember if Carl was always in the main series or not, but he was released and that’s what counts. 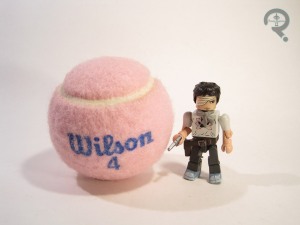 “Rick’s son, Carl had trouble adjusting to life inside The Community, and when their defenses were breached, he lost an eye trying to escape.” Carl is easily the most important character to still be unrepresented in this line. This was an issue that was noted pretty much from the start, though. In the initial 15 or so Minimates DST showed off when they confirmed the license, Carl was nowhere to be seen. As it turns out, Diamond was just waiting til they were certain they could get him right. Carl is around 2 ¼ inches in height and he features 10 points of articulation. Carl uses the standard Minimate body as a starting point, but he features a special set of lower arms and legs to give him a smaller, more childlike appearance, as well as sculpted add-ons for his hat/hair, backpack, and belt/holster. The arms and legs were first used on for the Thunderkittens from Thundercats. They provide a slight change in height and stature, at the expense of the articulation in the wrists and ankles. It’s not a perfect tradeoff, but it’s reasonable enough, and it provides enough of a difference to make it worthwhile. All of Carl’s sculpted pieces are re-use: the hat and holster are from Series 1’s Rick Grimes, and the backpack is from TRU Series 1’s Glenn. Since the hat is meant to actually be Rick’s the reuse is sensible, and the bag and holster are pretty good pieces. Carl’s paintwork is pretty good. All of the basic work is clean and well applied. The detail lines are also pretty great. I love that he’s got a Science Dog t-shirt. The face seems a bit too old for Carl, though. The cheekbone lines age him. Not terribly so, but it doesn’t look quite right. Carl is well accessorized; he includes an extra bandaged head, a hairpiece (re-used from Series 2’s Sailor Zombie), a handkerchief, a coat with an extra set of sleeved arms to match, a rifle, a handgun, a flashlight, and a clear display stand. The bandaged head is actually a bit better than the regular. For some reason, he looks younger. Don’t know why.

“Survival Tip: While not an effective way to kill a walker, fire is a good way to dispose of fallen corpses, a breeding ground for disease.” Burning Zombie is yet another basic zombie. Like the shoulder Zombie, I feel certain this one is based on a specific Zombie from the comics, but I don’t have an extensive enough knowledge of the series to know exactly where it comes from. It’s a pretty standard Zombie, though.  The Burning Zombie is about 2 ½ inches tall and he features 14 points of articulation. The figure is built out of the typical Minimate parts, with an additional piece for the flames. This piece previously saw use on the TRU exclusive Nova Flame Human Torch. It’s a good piece, and it’s well served to what they want to represent. Aside from that one piece, the figure really relies on paint. Fortunately, the paintwork is great on this figure. Everything is nice and clean and all the detail work is really sharp. The little details and texture on the zombie’s skin is outstanding, as is the detail work on the pants. Diamond continues to go the extra mile with their zombies in this line. The Burning Zombie includes a torch (presumably the one it was lit with) and a clear display stand.

Carl and the Burning Zombie were acquired from my local comicbook store, Cosmic Comix. I had passed on quite a few series of this line, but Carl proved to be enough to pull me back in, at least for a few sets from this series. It helps that Carl is one of the best figures in the line, and that he was packed with a pretty fantastic Zombie. I had a minor issue or two with Carl, but overall this was a tremendous set, an a fantastic showing for a pivotal character’s introduction into the line!