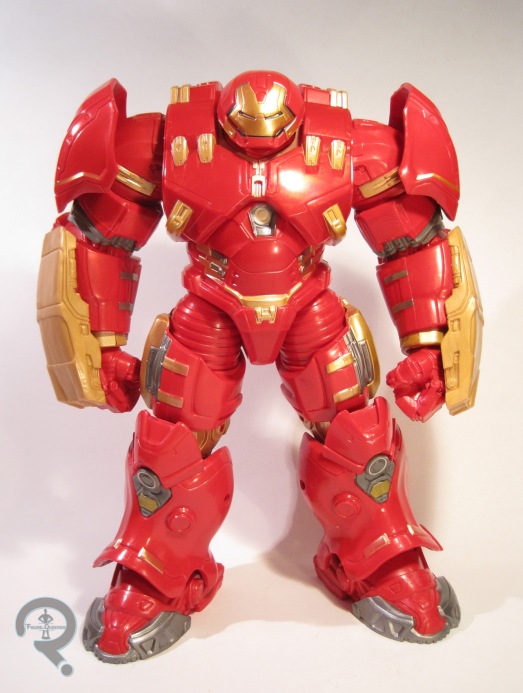 If you’ve been keeping up with the last week of reviews, the focus of today’s review being the Hulkbuster really shouldn’t come as much of a shock to you.

So, umm, yeah. Hulkbuster! Whoooooo! That’s…well, not really new or different, or anything. Not that that’s a bad thing! Just, everybody and there mother’s been doing Hulkbuster figures recently (gee, I can’t imagine why…), so I’ve kinda run out of things to say about the armor. Let’s just get to the freaking review already! 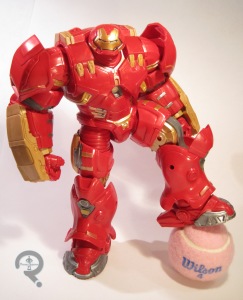 The Hulkbuster armor is the build-a-figure for the (appropriately named) “Hulkbuster Series” of the Avengers Marvel Legends Infinite Series line. This marks the second time that the Hulkbuster’s made into the Marvel Legends line, but it’s the first one in quite a while. He’s based on the design from Avengers: Age of Ultron, so he goes with that subset of Legends figures, though he also fits in just fine with the comic-based legends. The figure is 9 ¼ inches tall and has 31 points of articulation, which is pretty darn impressive for a figure this bulky. He also weighs a metric ton. No lightweight build-a-figure this time! Hulkbuster gets an all-new sculpt, and while it’s not Hot Toys level of detailing, it’s pretty great. Everything is nice and symmetrical, and they’ve done a pretty decent job of balancing the aesthetic of the sculpt with range of motion on the joints. As far as accuracy to what’s on the screen, he’s a little bit off. Not a lot, but enough to make it noticeable. In general, it seems Hasbro opted to give 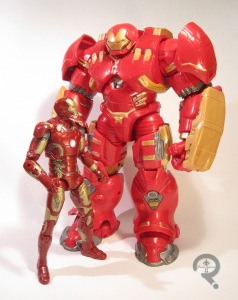 the suit a slightly more “heroic” build, broadening the shoulders, shrinking the head a bit, and lengthening the arms and legs. All minor nudges, but the end result is a bit different. Of course, it also ends up being something that looks more at home with the rest of the figures in this series, so I can see why they might tweak him. If there’s one area on this figure that has room for improvement, it’s the paint. Now, let me follow that up by saying that this figure’s paint is by no means bad. In fact, it’s actually pretty good for Hasbro. What’s there is bold and cleanly applied. It’s a good looking figure. However, the color palate is much too bright to be movie accurate (especially noticeable when this figure is placed next to the Mark 43) and the sculpt would very much benefit from a paintjob that does a better job of accentuating it. As is, it’s solid work, but with a better paint job it could be fantastic work.

Yeah, so, umm, see that build-a-figure part up there? Wanna take a guess as to how I got mine? As soon as this guy was shown off, I knew I wanted one. None of the other Hulkbuster stuff really excited me, but this one did. The final figure may have its flaws, but, like I said, this is still a really solid figure. Both metaphorically and physically. Seriously, in event of my house getting broken into, forget the baseball bat, I’m grabbing this guy! 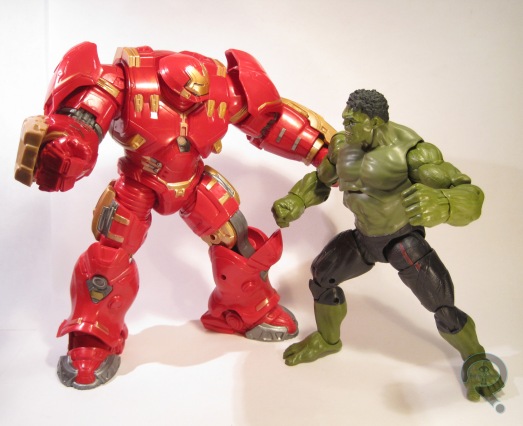