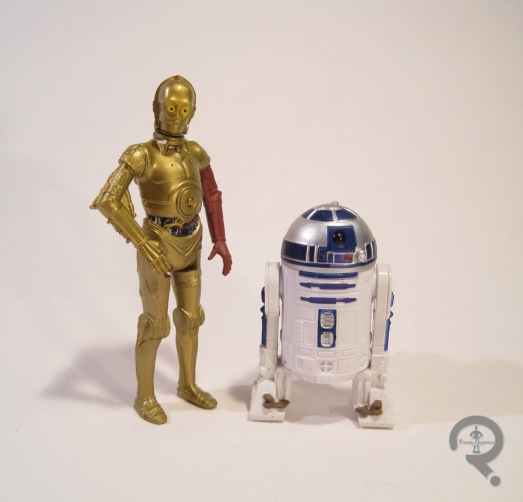 A lot of the merchandise for The Force Awakens has focused on the film’s newest characters. This has been met with some apprehension by a portion of the fanbase, who don’t want to invest a lot of money on characters they know nothing about. Fortunately, not everything is based on the new characters, so classic fans have a number of “safer” options, such as today’s focus figures, C-3PO and R2-D2.

C-3PO and R2 are part of the first series of two-packs from Hasbro’s current Star Wars: The Force Awakens line. They’re one of two sets of figures in this particular assortment to actually come from The Force Awakens, though even they only just barely qualify.

First up is the panicky, overly emotional golden boy of the franchise, C-3PO, human-cyborg relations. The figure stands 3 ¾ inches tall and has the now standard 5 points of articulation. To be fair, the reduced articulation is actually a lot less of an issue on someone like 3PO, since he’s not the most agile character to begin with. 3PO shares his sculpt with the recently released Mission Series Tantive IV Two-Pack version of the character, which seems reasonable enough, since his design hasn’t really changed. It’s a pretty good representation of the character, and it has some nice detail work, especially on the arms and the one open section of wiring on his midsection. So, old sculpt, old design, old character. What makes this figure The Force Awakens-inspired? Paint. For the most part, he’s just the usual gold, but now he’s got a funky red left arm. Why? I have no idea, but there it is. On the plus side, it looks like he finally got his silver leg replaced with a proper gold one, so he’s not too patchwork. The paint is fairly decent overall, though the eyes are a little wonky. If you have the option, you might want to look through a few sets to find the one with the least wonky eyes. 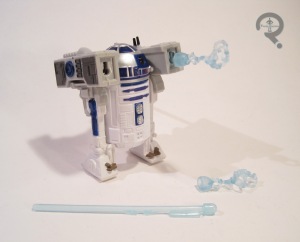 And here’s R2, the one single character in the entire franchise whose look never changes. But he really needed another figure, I guess. Plus, it’s not like you can release a 3PO figure without him. That’s insane. R2 is about 2 ½ inches tall and has 3 points of articulation. That’s kind of lackluster for R2, since it means he can’t even properly do one of his signature poses. Not that it matters, since he doesn’t have his third leg. Like 3PO, R2 also shares his sculpt with the Mission Series version. It’s a reasonable enough, I suppose. The details on the legs are a little soft, but not terribly so. In general, he looks like R2, which is the main point here. Unlike 3PO, the paint doesn’t really do much to set R2 apart from the previous figure to use the mold. It’s just fairly basic R2 paint. It’s fairly cleanly applied, so that’s good, but it would definitely help the figure if he had some sort of wash to help bring out the details of the sculpt. As is, he feels a little bland. This R2 is different from the last one is one way: accessories. Yep, this guy comes with a pair of missile launcher that can be attached to the top of his legs. Something tells me these won’t actually be showing up in the movie, but at the very least they do match R2’s overall aesthetic, and the missiles are actually kinda neat.

I didn’t really set out to find this pack or anything, but I saw it a few times at my local Target, and thought it was vaguely interesting. Then I realized I hadn’t actually bought a C-3PO figure since the POTF2 version from the 90s, and felt kinda bad, so I grabbed this set the next time I saw it. It’s certainly not the most exciting thing to come out of the new movie. 3PO’s got some merit, being slightly different from previous figures and being pretty well put together all around. R2 on the other hand, doesn’t really have much to offer, and is a “meh” figure at best. I’m kind of assuming most people will be getting this set for 3PO.