Over the weekend, it was announced that artist Darwyn Cooke had passed away. While Mr. Cooke may not necessarily have been a household name, his body of work was nothing short of amazing, and his death is a huge loss to the comics community. Cooke spent most of his career working for DC Comics. A lot of his work was used for promotional purposes, but he did have a few prominent runs, as well as several one-shots and miniseries. Perhaps his greatest work was his Elseworlds project DC’s New Frontier, a love letter to late Golden Age and early Silver Age stories from the company. It was successful enough to get an animated adaptation through Warner Brothers, and even got a two series line of figures from DC Direct. In honor of Darwyn Cooke’s legacy, I’ll be looking at my personal favorite figure from that line, Doctor Fate. 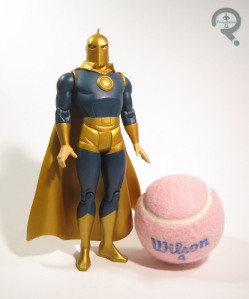 Doctor Fate was part of the second series of New Frontier figures from DC Direct. His inclusion in the series was a bit of a shock, since the character doesn’t really have a very prominent role in the comic. Of course, neither did Series 1’s Black Hawk, so perhaps DCD just wanted to have one oddball choice per series. It’s also possible that the figure was requested by Cooke, as is known to happen with lines based on one specific artist’s work. Whatever the case, I don’t think anyone complained about his inclusion in the line. Doctor Fate is about 6 ½ inches tall and he has 11 points of articulation. That’s not a whole lot of movement, but it wasn’t bad for a DCD figure of the time. He’s not going to be getting into any major action poses, but the arms and head offer a pretty good range of possibilities. The figure is, obviously, based on Cooke’s illustrations of Doctor Fate from the comics. He’s not far removed from the classic Doctor Fate; in place of the usual flared gloves, he has a pair of wrist bands. It preserves all the classic Fate styling a, while still adding a nice flair of originality to the design. While some of the other figures in this line exhibited a little bit of difficulty translating Cooke’s style into three dimensions, Doctor Fate’s sculpt does a pretty fantastic job. Something about his general design just really

brings out the best of Cooke’s work, and results in a really sharp looking figure. The hands have unique posing (I especially love the right hand) and the cape has some of the best flow I’ve seen in a sculpted cape, but the best part of the sculpt is the head. The helmet is a separate piece, though it’s not removable (well, not intentionally, anyway). The use of a separate piece allows for a fully sculpted set of eyes to be visible beneath the helmet, which adds an incredible amount of depth to the figure. Even without there being a whole head below the helmet, the appearance is there. Doctor Fate’s paint work is pretty strong. The colors are well chosen, and nicely match up with the color palette of the books. The application is nice and clean. There isn’t much accent work, but that feels true to the comics. Doctor Fate’s only accessory was a display stand, which was the same stand included with all the New Frontier figures.

Doctor Fate, along with the rest of Series 2 of New Frontier, was a Christmas gift from my parents. Amusingly enough, though he’s my favorite figure from the set, he was the one figure in the Series I wasn’t sure I wanted. I’m happy to say I was wrong, and he’s remained not only my favorite New Frontier figure, but also my favorite version of Doctor Fate (which isn’t as simple a task as you might think).