DC Minimates are kind of a tale of woe and misfortune.  Despite the best efforts of a good number of people, the concept has never really taken off the way other Minimates properties have.  There have been some strong attempts, but there always seems to be something a little off with the execution.  Back in 2004, thanks to some tricky legal mumbo-jumbo, DC Minimates couldn’t be released in a straight forward fashion.  The only way to get them made was to make them the included figures in a line of Lego-style construction sets, dubbed “C3” (for “Create, Construct, Customize”).  I’ve looked at a couple of the ‘mates from those sets, but haven’t looked at a whole set as of yet.  That changes today, with this here review of the Throne Room Battle and included ‘mates Superman & Darkseid.

The Throne Room Battle set was one of the first seven sets in the DC C3 Construction line.  It’s noteworthy for being the only of those seven sets not to be Batman-themed, and also for being one of the two sets in the first assortment to be based on the then running Justice League cartoon, albeit somewhat loosely.

The main bulk of the box is taken up by the Throne Room for which this set is named.  While the Batman sets were themed around a number of his distinctive vehicles and the always popular Batcave, the Throne Room seems a little bit out of left field, since it’s hardly something that most people would consider a signature Superman locale.  I guess it’s a good way to give us Superman and Darkseid, and it’s certainly a better use of the building set theme than some of the later entries in this line, but this is probably the furthest stretch in the first series.  The Throne room is constructed from 41 pieces (the box lists 67, but that’s counting the parts used for Superman and Darkseid), and the final product is based on Darkseid’s throne room as seen in the Justice League episode “Twilight”.  It’s not an overly complicated set to build, nor is it anything particularly astonishing 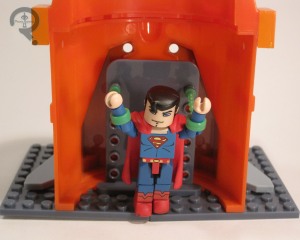 once completed.  The bulk of the work goes into the actual throne, which is decent enough.  It’s designed to be removed from the base (on purpose, not just in the “well, they’re all Legos” sort of fashion), which makes for an interesting feature, I suppose.  The base is made from four smaller flats, and doesn’t really offer much in the way of sturdiness.  This isn’t something you can really pick up and carry around.  One of the cooler parts of the set is the tower behind the throne.  While the tower itself is just a simple two piece construction, on the other side of it there’s a little cell, with Kryptonite chains on the wall for holding Superman.  It’s a cool little touch, and it adds a lot to the set.  There’s also a flight stand for Superman included, which is certainly a welcome addition, even if it can be a little difficult to find a good spot for it on the base platform.

Okay, let’s be honest, no one was really buying this set for the building blocks.  The main draw was this guy right here.  This was Superman’s first ‘mate, but he would later get a few more courtesy of DC Direct’s DC Minimates line.  This one’s more clearly based on his animated design, with an all-around sleeker style to the detail work and such, which was admittedly a good fit for the slightly less detailed Minimates of the time.  He’s built on the basic Minimate body (of note, he’s one of the first ‘mates to sport the C3 feet, but also one of the last to have a hair piece without a peg), so he’s about 2 1/4 inches tall and he has 14 points of articulation.  He has add-ons for his hair and cape.  Both pieces would later be used in the Marvel line.  They aren’t super detailed, but the work well enough, and are about standard for the time.  The cape is actually one of my favorite Minimate capes, just for its simplicity and the way it sits.  Superman’s paintwork may not be super detailed, but it is pretty solid work nonetheless.  The lines are all nice and sharp, and he looks very well put together as a whole.  I wouldn’t have minded the colors being a touch brighter, but late Supermen fixed that, so I can’t complain much.

In contrast to his pack mate Superman, this is the only Darkseid Minimate we ever got.  Like Superman, he’s patterned on his animated design, which is admittedly less noticeable on him, since Bruce Timm and Jack Kirby’s styles are pretty similar.  The figure is also built on the basic ‘mate body, so he has the same basic height.  He does get one extra point of articulation courtesy of his sculpted chestpiece, which has an articulated skirt so that he can sit a bit better.  He also gets sculpted add-ons for his headpiece and gloves.  In general, the pieces show their age a lot more than those seen on Superman, which is something of a shame.  Also, the use of the smaller body, without any real attempt to bulk him up (apart from the chest piece) robs him of a lot of the character’s presence, and ends up making him look rather goofy.  The paintwork on Darkseid is decent enough.  The line work is all pretty sharp, and makes use of the space well, and I quite like the slight metallic finish of the purple bits.  It doesn’t really line up with his animated design, of course, but whatever.

Back in the day, this was the second C3 set I grabbed.  I’ve always liked Superman, so I certainly wasn’t going to miss out on a Minimate version of him.  Over the years, I managed to lose most of the pieces to this set (including the two ‘mates included with it).  This past summer, I found a replacement at Gidget’s Gadgets in Rehoboth Beach.  It’s a fun set, if a little out there.  It’s certainly not going to beat something like a true Lego set or anything, but it was a decent enough attempt, and I do really like the Superman included here.