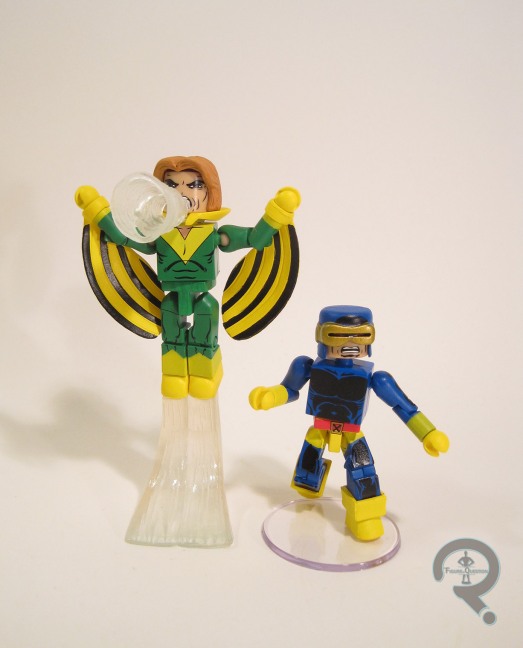 In the summer of 2003, Marvel Minimates was launched, with Series 1-3 all hitting pretty much simultaneously.  It was an interesting mix of characters and eras to be sure, but that’s a story for another review.  Series 3 gave us our first taste of the X-Men, presenting them in their Ultimate X-Men incarnation, which was a little bit of a letdown for the more classic comics fans in the audience.  Fortunately, in January of the following year, they got back to the X-Men, this time offering up a set based on Giant Size X-Men #1, perhaps the quintessential “classic” X-Men.  Now, 13 years later, they’ve returned back to GSXM #1, this time offering up a whole series of two-packs based on the team.  Today, I’ll be looking at the first two-pack from the set, leader man Cyclops & Banshee!

Cyclops and Banshee are part of the 68th Series of Marvel Minimates, which hit towards the end of September.  Both characters are based on their Dave Cockrum designs from the early issues of his and Chris Claremont’s run on X-Men, though, in the case of Cyclops and Banshee, both designs are slight tweaks of the Werner Roth designs for the characters.

When it came time to rebuild the team, Cyclops was the one point of overlap between old and new (though Jean Grey would find her way back in short time, and Beast and Angel would both pull stints as recurring members.  Only Iceman really stayed away), kept on as the new team’s field leader.  It gave him a sense of seniority he hadn’t really had with the prior incarnation of the team.  This particular Cyclops design has graced the Minimate style twice before, but the last time was as part of an exclusive two-pack in 2005.  Minimates have made a lot of progress since then, so the update to what is probably Scott’s most prominent design is a much appreciated one.  The figure stands about 2 1/2 inches tall and he has 14 points of articulation, as is the norm for any figure built on the standard ‘mate body.  Cyclops has additional parts for his cowl/visor and his boots.  The boots are the standard cuffed boots, and they do the job well enough.  The mask is a new piece, and it does quite a nice job of both capturing the feel of Cockrum’s illustrations of Cyclops’ visor, while also still fitting in well with the general Minimate aesthetic.  The rest of Scott’s details are handled via paint.  The overall application is pretty good, but there are a few issues, such as his left glove not getting enough coats of yellow to totally cover the underlying blue, thereby giving him a slightly green color.  Also, like a few previous X-Men, his belt buckle still has some traces of yellow left at the very bottom, which is a little frustrating.  That being said, there’s a lot to like here.  The shading on the blue sections of the costume is very near perfect, and really sells this as a late 70s Cyclops, as well as adding a lot of depth and dimension to the design.  While the gold visor has occasionally been something that bothers me on Cyclops figures, this is one time I really don’t mind, as Cockrum always went out of his way to indicate the visor was metallic.  I also appreciate the little red visible “eyes” in the visor, as they signify this is undoubtedly a Cockrum Cyclops, not Byrne.  Under the mask, there’s a face that’s a pretty great recreation of the unmasked Cyclops we see near the beginning of GSXM #1.  I really like the extra attention to detail on this one.  Cyclops includes a spare hairpiece for his unmasked look and a clear display stand.  The AvX and ANAD Cyclopses both included an extra mask with an optic blast attached, which certainly would have been nice, but given the number of extras included with the other figure in the set, it’s not the worst thing ever.

Banshee was one of two members of the new team to have already appeared in X-Men prior to to GSXM#1, so he wasn’t one of the new characters paraded on the oh so famous cover.  By extension, he was also left out of the GSXM boxed set back in 2004, and left unreleased until Series 60, last year.  And even then, that was in his Strike Force uniform, making this particular ‘mate 13 years in the making.  Alright!  Guess my focusing on the positive worked!  Banshee gets add-ons for the hair, collar, and his wings.  The hair and collar come from the “Strange Tales” Morbius. They work decently enough.  I personally prefer the hair used on the last Banshee ‘mate, but the Morbius piece is a good match for Banshee’s appearance

earlier in the run.  The wing pieces are new.  The slip over the wrists, and when positioned correctly, look like he’s using them to glide on the air.  Pretty cool new pieces, definitely.  The paintwork on Banshee is pretty good in general.  There are some fuzz edges here and there, and there’s a weird sort of film on the pelvis piece, but otherwise, the line work is sharp, and the colors are nice and bold.  Banshee’s default face is screaming, which is pretty well handled.  He also includes an extra head, with a more playful grin, a perfect recreation of Cockrum’s depictions of Banshee off-duty.  I can’t begin to tell you guys how excited I am to have a Banshee that includes an extra, non-screaming head.  How this is the first version of the character to do such thing, I’ll never know.  In addition to the extra head, Banshee also includes the cape and sonic scream piece from the last Banshee, as well as a flight stand and a clear display stand.

For quite some time, one of my main wants from Marvel Minimates was a GSXM-themed series.  For a number of stupid reasons, I never owned the original boxed set, so there was this sort of a hole in my collection.  So, I was pretty thrilled by the announcement of this set. Moreover, I’ve been waiting for this Banshee pretty much since 2004, so I’m very happy to have him finally.  He’s definitely the Banshee I’ve been waiting for.  Sorry Strike Force Banshee, looks like you’re being replaced (well, maybe I’ll keep that hair).  The John Byrne Cyclops from 2005 has been my go to version of the character for over ten years, and he’s become increasingly outdated as the line’s moved on.  I was eagerly awaiting the new version, and I’m very happy with the final result.  This one’s going to be hard to top moving forward! 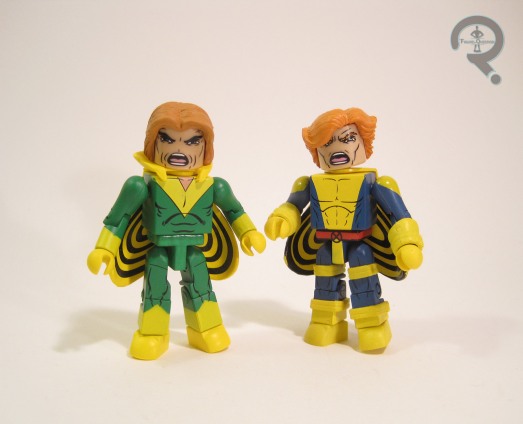