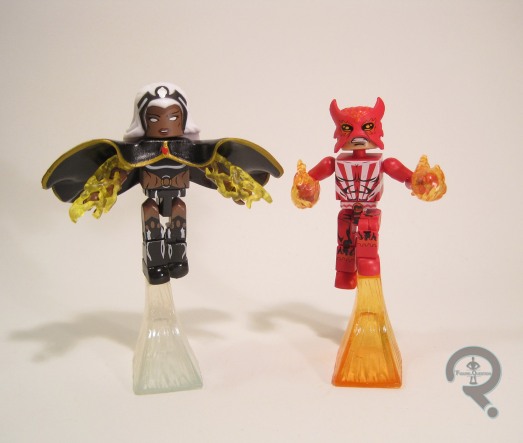 One of the more intriguing aspects of the “All New, All Different X-Men” presented in Giant Size X-Men #1 was the diversity of the team.  This was especially poignant in comparison to the original team.  While the X-Men (and Mutants in general) were supposed to represent groups who were oppressed, shunned, and otherwise mistreated, the actual original team was made up entirely of upperclass, good-looking, and generally well-off whites, which ever so slightly hindered the message the creators were trying to put forth.  When the new team appeared with members representing cultures from all over the world, it really helped to sell the inclusiveness of the whole idea, and redefined how the team was portrayed moving forward.  Many of these new characters became some of the most memorable characters in the franchise’s history, including Storm, who I’m looking at today.  Then there’s Sunfire, who is…less memorable….

Storm and Sunfire are part of the 68th series of Marvel Minimates, which is GSXM-themed.  Both characters are based on Dave Cockrum’s renditions of the characters from Giant Size X-Men #1, though, like with Banshee yesterday, Sunfire’s design was just a slight tweak on his design from earlier in the original run.

Aside from Wolverine, Storm is easily the most memorable of the characters brought onto the team in GSXM #1 (and she’s definitely the most memorable of the characters *introduced* in GSXM #1).  To date, she’s held a prominent role in every cartoon adaptation, and had a role in five of the six movies (and she even cameoed in the sixth).  That’s important!  She’s also had 9 prior Minimates, covering most of her prominent looks, which is better than can be said for quite a few Marvel characters.  Being built on the standard Minimate base body, Storm stands about 2 1/2 inches tall and has 14 points of articulation.  Storm gets add-on pieces for her hair and cape.  Both of these pieces are new to this figure, and they look quite good.  Some figures of this storm design downplay the length of her hair, which is always a little frustrating, so I was grad to see this one doesn’t.  The basic cape included here is decent enough, if perhaps a little rigid.  Fortunately, for those who want Storm’s cape to be a little more flowy, there’s also a much larger, flying cape included.  It’s definitely my preferred piece of the two, and it really sets this Storm apart from the others we’ve gotten.  Storm’s paintwork is pretty solid all around.  All the colors are great matches for what’s seen on the printed page, and I really like the glossy sheen on the black parts of her costume.  This figure probably has some of the best paintwork in the series.  In addition to the extra cape, Storm also includes an extra head (w/ pupils), two electricity pieces, a flight stand, and a clear display stand.

Sunfire here pairs up with Banshee on the whole “left off of the cover” business, meaning he was also left out of the original GSXM boxed set.  Unlike Banshee, this is actually his very first Minimate (and only his fifth action figure in general).  Sunfire’s never been all that prominent, since he quit the team after only an issue, and never really came back, so no real action figure coverage for him.  He’s probably not helped by his costume have the rising sun motif, but there it is.  The figure gets an all-new add-on piece for his weird looking mask.  It does a decent job of trying to make sense of that goofy thing.  Could this be the first time that a Minima’s lack of nose actually makes his costume make more sense?  The rest of the details are rendered via paint, which is all pretty solidly handled.  The white parts could be a little cleaner, and the orange could maybe stand out a bit more, but the line work is really great.  Under his mask is an appropriately angry Shiro Yoshida.  That guy was alway pissed.  For accessories, Sunfire gets an extra hairpiece for an unmasked look, two flame effect pieces for his hands, an orange-tinted flight stand, and a clear display stand.

Ever since missing out on the GSXM set, I’ve been waiting on a good classic Storm, and when this one was announced, I was pretty psyched.  I can’t say I’m disappointed with the final product.  Definitely the best version of the character yet.  And, getting Sunfire after so long is also pretty darn cool.  He’s no one’s favorite character, but he’s an important piece of the team’s history nonetheless, and it’s great to finally have him!