A quick glance around the internet tells me that this may be a slightly controversial opinion, but I really love the work of Alex Ross.  Marvels and Kingdom Come are obviously the standouts, but in the late ‘90s/early ‘00s, his work was the best source of classic DC Comics material out there, which was something of a godsend for me, a classic comics fan born into the wrong era. In that regard, his 12-issue maxi-series Justice, which was effectively Challenge of the Superfriends on an even more epic scale, was right up my alley.  The fact that it got a whole line of figures courtesy of DC Direct?  Icing on the cake.  Today, I’ll be looking at my first figure from the line, Barry Allen, aka the Flash! 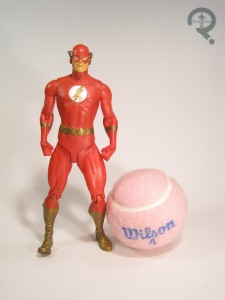 The Flash was released in the first series of Justice figures from DCD.  This was only the second Barry Allen Flash we’d gotten from them, and the first time he’d been released solo.  The figure stands about 6 1/2 inches tall and has 9 points of articulation.  Not a ton of movement, but it was an incredible step up from the prior Kingdom Come figures, which had what can be described as “minimal” movement at best.  He’s based, of course, on Alex Ross’s depiction of Barry from not just Justice, but also the tabloid-sized specials DC put in the early ‘00s.  It’s really just Barry’s classic costume styled as if it were made from real fabrics and worn by a real person, but that’s a pretty good look.  The sculpt on this guy was handled by DCD’s main sculptor at the time, Tim Bruckner, and it’s not a bad stab at this particular design.  The main issues I would cite with this figure come from its desire to be two different things simultaneously.  They wanted him to be in a sort of a running pose (something no Flash figure they’d released up to that point was capable of pulling off), but also be able to stand up relatively straight, like the rest of the line.  The end result is a figure with a rather static and stiff upper half, and a lower half that looks to be mid-lunge.  With a bit of careful posing, you can get him to look fine (which is more than can be said for some of DCD’s later output), but he always seems ever so slightly off.  On the plus side, there’s a lot of fun detail work on the sculpt.  The costume sports plenty of wrinkles and stretched fabric, to make it more convincing that he’s not just sporting body paint, and there’s even a seam running down the front, showing how he gets the costume on and off.  The boots are heavily wrinkled and very obviously a different material than the rest of the costume, and there’s even the appropriate treading on the soles.  The head is some pretty solid work as well; the face under the mask displays Barry’s goofy charm pretty well, and the mask has a seam running across the forehead, much like Adam West’s Batman Cowl.  The paintwork on Flash is pretty good, but I have one small complaint: they used gold in place of yellow.  It’s not an uncommon practice, and this is far from the first Flash to do so, but when companies do this, they almost always use this dark and rather dull gold.  In the case of the Flash, this robs him of some of his costume’s boldness and clash, and on this particular figure, it has the unintended effect of sort of reversing the dynamic of his costume and making the red the lighter color in most lighting.  A more vibrant gold would have looked a bit better.  Apart from that, the application is all pretty clean, and I do really like the slightly pearlescent red they’ve gone with.  Barry’s only accessory was a rather large and unruly display stand, which was the same one included with every figure in this line.

Despite getting most of my DC Direct figures from Cosmic Comix, I actually got Flash from a Suncoast.  I think CCX had sold out of Flash by the time I got there, so I ended up finding him while on a mall outing with my Grandmother and my cousins.  I think he may have even been on sale.  I was quite excited to get him, since I didn’t yet have a Barry Allen in this scale.  He remained my go-to Flash figure until he was eventually supplanted by the Darwyn Cooke-styled Flash from New Frontier.  He’s not a perfect figure, but he’s a pretty solid one, and he definitely brings back some fond memories.