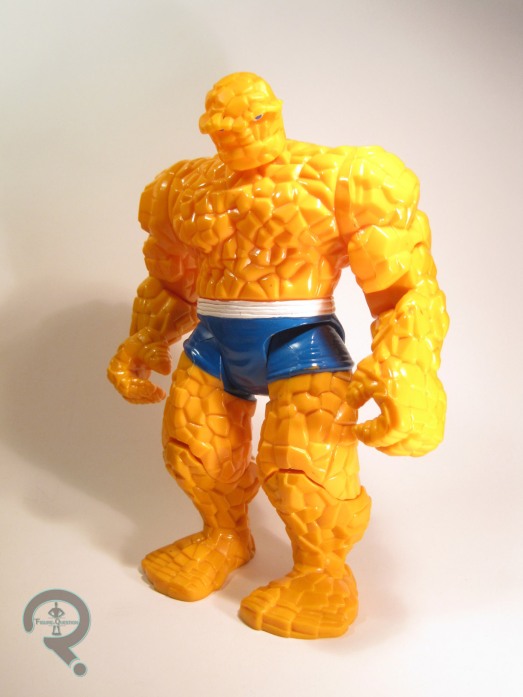 “Ben Grimm became the Thing after he was bombarded by cosmic rays in a space flight gone awry with scientist Reed Richards.  Since then he has dedicated his life to fighting crime as a founding member of the Fantastic Four, fending off many foes with the mere words — it’s clobberin’ time!”

It’s been 3 years since I reviewed a figure of Benjamin J. Grimm, better known as the ever-lovin’, blue-eyed Thing.  That’s quite a long time.  It’s a bit surprising, really, since he’s the FF member I own the most figures of, so you’d think he’d show up a little more frequently, but no.  Well, I’m fixing that today, and I’m also looking at yet another of the old Toy Biz 10-inch figures.  That’s always fun! 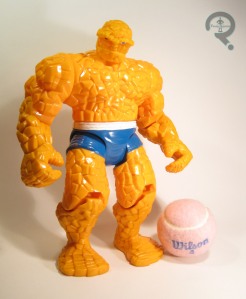 The Thing was part of the second assortment of Toy Biz’s Fantastic Four: Deluxe Edition line.  I think.  It got a little hard to follow after the first three-figure assortment.  The main thing to note is that they only ever released Ben and Johnny in this scale (flip side, they only did Reed and Sue in the Famous Covers style.  So, it works out, I guess?)  The figure stands a little over 10 inches tall and has 9 points of articulation.  As I’ve noted a few times before, the 10-inch figures made use of the two-up prototypes used for the 5-inch line.  This is partly true for the Thing, but he also has a pretty healthy helping of new or tweaked parts, presumably to help with costs.  The only part that looks to be a straight re-use is the head, which is a pretty great Ben Grimm head, so that’s certainly a good thing.  The rest of the parts follow the general look of the smaller figure, but he’s been given a much straighter stance, thereby giving the figure less overall bulk.  He’s still quite a bit more sizable than the other figures in the line, so it’s not a really big change.  In general, he also seems a little more boxy than his smaller counterpart, which doesn’t look quite as good, but once again, it’s not a huge difference.  Regardless, the head sculpt is the real star here.  The paint on Ben is pretty basic; he’s molded mostly in orange, with a bit of blue and while for his shorts and eyes.  What’s there is pretty decent, though obviously the paint on my figure has seen better days.  This figure was originally packed with a protective helmet, emulating the helmet Ben wore in the comics when he had the robotic suit to replace his lost powers.  It was rare that a 10-inch figure got an extra not included with the smaller figure, but this was the one that got it.  If only mine still had his.

I didn’t have this guy growing up.  He didn’t hang around stores long, and he also didn’t get any prominent re-releases like some of the other figures.  This guy’s actually the first item I’m reviewing from my pretty awesome haul I picked up from Bobakhan Toys, which is a super awesome toy store I found just outside of Seattle while I was there with Super Awesome Girlfriend’s family.  I was, admittedly, a little overwhelmed by the sheer volume of toys in the store, so I was trying to pick and chose a few things that most stood out to me.  Super Awesome Girlfriend picked this guy up and insisted I get him.  I can’t say that I really fought her.  I like this guy.  He’s not quite as cool as the 5-inch version, but he’s still pretty awesome.  And Ben’s my favorite FF member, so that probably helps with the cool factor as well.