Variety is the spice of life or something.  It keeps things interesting.  But what if you’re in the middle of a foam conflict and you find yourself thinking, “Something new and/or exciting better happen right now or I’m gonna lose it”?  The answer is simple.  Use the selector switch.  What does that mean?  Well, I’ll tell you.

The Nerf Dual-Strike was released in 2016 as part of the N-Strike Elite series.  The mechanics present in the Dual-Strike are mostly reused with one big exception that I will get into later.  The blaster fires from one of two sets of three barrels linked via a smart AR system.  The interesting part is that one set of barrels fires standard Elite darts while the other fires Mega darts.  On top of that, you can manually control which type of ammo you want to use via the previously mentioned selector switch on the right side of the blaster.  The switch is quite clearly labeled so you know which setting it’s on.  It’s actually pretty impressive that the switch works as well as it does since it’s not uncommon for more complex smart AR setups to want to eject darts prematurely if there’s even the slightest increase in air pressure.  Since I’ve had the DS, I haven’t experienced any air interference from one barrel group to the other, so kudos to Nerf on the engineering behind that.  Now on the other hand, I do have a few mostly subjective complaints about the exterior of the blaster.  I’m not a fan of the style of priming handle on the DS.  I realize it’s simple and just works, but I really don’t like how it sticks way out the back of the blaster when it’s primed.  There are other Nerf blasters that use this same method of priming and I don’t like it on any of them either, all the way back to the Nitefinder.  I just wish there had been a more 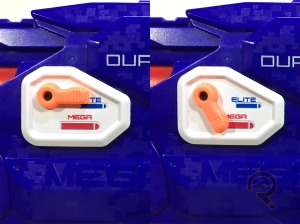 elegant solution because I know it’s possible.  Also, while the grip is mostly fine, the notch just below the trigger where your middle finger is supposed to sit is way too narrow for my hand, so instead of my finger getting a secure, comfortable hold on the blaster, I have one finger sitting on a random raised edge.  It would have been better if this had either been moved down slightly or just removed entirely.  Again, mostly just my personal preferences, but I figure you must at least slightly value my opinions since you’re most of the way through this post, and if you are, I appreciate that.  There’s also a single attachment rail on the top of the blaster.  As far as functionality is concerned, at it’s most basic, the DS is a more complicated than usual 6-shot pistol which is pretty oddly proportioned to boot.   The Elite darts fly reasonably far and hit as hard as you’d expect a blaster in the Elite series to hit.  The Mega darts, however, don’t have the power behind them that they would have in a dedicated Mega blaster, so shots leave just a little to be desired.  Overall, I’d say the DS is best suited to indoor use for those times when you can’t decide just how mean you want to be to your younger siblings.  The Dual-Strike comes packaged with 3 Elite darts and 3 Mega darts.

The Dual-Strike is one of those kind of hard to place blasters.  It felt more like a proof of concept rather than a product made to fill a niche in the market.  That being said, it’s plenty of fun for just messing around.  I just see the idea behind it having more potential than the final product we got in the end.  Add that to all this switch and DS talk and I feel like I’m writing up a Nintendo press release.