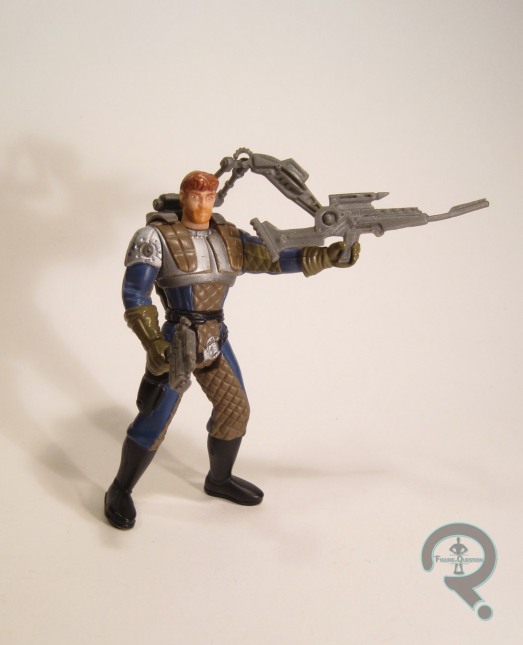 “In all the galaxy there are few who can fly and shoot like Dash Rendar. Many years ago, as a cadet at the Imperial Acadmey, he continually impressed his superiors with the ability to push vessels beyond their usual limits, executing maneuvers his ships were never meant to perform. He held great promise as a future Imperial officer until a freight vessel piloted by his brother malfunctioned and crashed on Coruscant, destroying a private museum that housed many of the Emperor’s treasures. Though the mishap was not the pilot’s fault, the Emperor banished Rendar’s family and had Dash expelled from the academy. Given his bold disregard for regulation and arrogant confidence, it is doubtful that Dash would have fit in well within the ranks of the Empire anyway. He never hesitates to boast of his skills as an expert pilot and gunner. After his dismissal from the academy, he began a career as a thief and gambler, but soon discovered that his exceptional flying skills were a great asset in the smuggling business. He quickly became very successful, making his services expensive but guaranteed for the right price.”

That is a lot of bio right there.  And it’s especially long for a character who could best be summed up as “Han Solo for that one story where they needed Han Solo, but he was all frozen and stuff.”  That’s my official bio for him, anyway.  Dash is one of the earliest examples of a wholly Expanded Universe character appearing in a Star Wars toyline (he and Prince Xizor, from the same story, appeared at the same time), which is actually pretty nifty.  Sadly, that’s the only time he’s ever gotten a figure, but at least he got the one, meaning that I can review it here today! 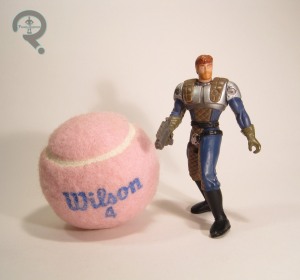 Dash Rendar was released in the first and only series of Star Wars: Shadows of the Empire, a spin-off of Kenner’s Power of the Force II line.  The figure stands a little over 3 3/4 inches tall and he has 6 points of articulation.  Dash has a unique sculpt, which was based on a number of Dash’s various designs.  Yes, as a totally non-film character, Dash didn’t have one particular design, just more of a general set of generally consistent elements.  He’s got the armor and the padded jumpsuit, which showed up just about everywhere.  He’s also got long sleeves, which kind of look to be unique to this figure; most depictions of him were bare-armed.  To be fair, the sleeves make him fit in a little better with the rest of the Star Wars characters.  In general, Dash’s design really is Han Solo if Han Solo had been designed by a comic book artist in the ‘90s, which is to say he’s a little ridiculous and over-designed.  On the plus side, the slightly exaggerated proportions and pose that most of the PotF2 figures had is right at home with Dash’s uber ‘90s design, which does make him a little more consistent as a whole.  In general, there’s some pretty solid work on Dash’s sculpt.  There’s a lot of fine detail work that you didn’t usually see on figures of this vintage.  Dash’s paint work is pretty decent as well.  The colors are slightly garish, but that fits the character, and at the very least the application’s all really sharp.  The figure was packed with two blasters, one large and one small.  There’s also a back pack, with a little arm that can attach to the larger blaster.  You know, for….reasons.  I don’t know *what* reasons, but I’m sure there are some.

I didn’t have this Dash figure growing up (though I *did* have his Micro Machine), but I always kind of wanted one.  Of course, since he was the only truly unique figure in the set, he was a little more scarce than the other figures.  I’ve been on the look out for him for a little while, and I ended up finding him at Pop Culture Exchange in Omaha, while on my way back home from Seattle.  Sure, he’s super, super ‘90s, but that’s kind of the best thing about him.  Guess I’m gonna have to get the Outrider for him to pilot now.  Oh darn.