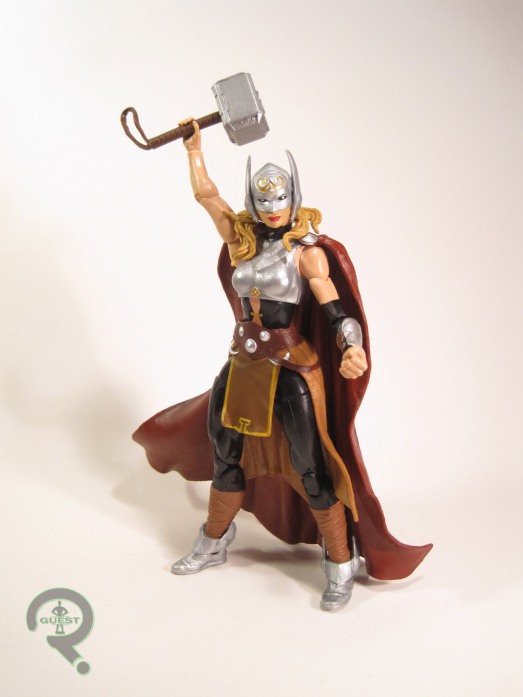 Heyo and happy Thorsday, everyone! Heh, get it (You can’t see me, but I’m wiggling my eyebrows)? Of course you do, and if not that’s fine too. Quick fact: Thursday was originally called Thorsday after the Norse god Thor. Another fun fact: Wednesday was originally called Wodenesday, after Woden/Odin, and Friday is in honor of Frigg or Freyja. Alternatively, Wednesday was also the day of Mercury, and the Roman’s tried masking Odin and Mercury together. Anyways, wow sorry for the detour and on with the show! 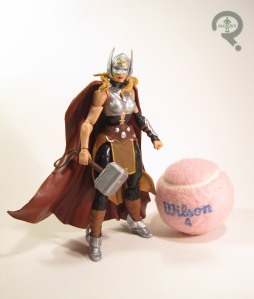 So this beautiful female warrior is the new Thor from the currently running comic series The Mighty Thor. She’s not Miss Thor or Lady Thor just Thor, the name given to her by the previous Thor who now calls himself Odinson. This Thor is one of a few in the new Thor Marvel Legends series, which also includes Thor: Ragnarok versions of Thor (male) and Loki with the build-a-figure being gladiator Hulk.

Thor stands at about 6 inches tall, and no I’m not going to crack out a measuring tape to give an exact measurement because I don’t really care for that. All I care about is that she looks cool, which she does, so sue me. She has 29 points of articulation and is built on the Moon Stone body, but she has unique head, cape, chest, left forearm, skirt, shins, and ankle thingies.

Thor’s head is pretty cool and I like what they’ve done with it. Her face and helmet aren’t super detailed, which is fine because there’s not much detail to them in the comic since she’s trying to hide her identity. The helmet could’ve had a little more detail then some paint and suggestions of markings, but honestly it doesn’t take away from the figure’s overall look. Her hair is molded such that she can wear her cape and still have some movement, unlike other female figures I’ve seen that are limited by their long hair. The cape is neat but also kind of annoying because it has a hard time staying on sometimes, since the peg bent slightly and has to go into her back. Overall, the cape is neat in simplicity, with tons of wrinkles and some texturing to make it look like cloth. In the comic I think the cape is a bit longer, if not ridiculously long but I completely understand that that is hard to accomplish with a posable figure that’s supposed to stand on its own. Her arms are a little skinny for me, I think they should be a little bit bigger but I understand that Hasbro probably wanted to save money by reusing an older body. Her left forearm is unique because it has a special bracer that’s a part of the costume. The bracer is pretty cool and I really enjoy it. It’s all smooth and shiny with suggested layers and little markings that show where the arm bands connect to the metal, and then arm bands of tiny little buckles and actual suggestions of straps, loops, and holes for adjusting. I know, crazy to spend so much time looking at a forearm but it’s so detailed that I get carried away. Next is her chest piece which looks like a typical chest plate with some Nordic symbol that’s too small to discern. Like the arm brace, it’s shiny and has some texture that gives the appearance of thick metal, but it’s a slightly different color than the brace. My favorite part about her costume was the skirt and this figure does not disappoint me there. The skirt is not fixed to the figure, though I doubt it can be easily removed, and it is designed to help give her legs a more powerful look and also appear to be in motion, due to wind or something. It’s a simple piece but I really like it because it’s practical. The outside of the plastic is a bit rough like think cloth, the belt has little raised circles which are very common in leather belts, and the front flap’s border is a little raised to give it an embroidered look. Most of her legs are painted blank, assuming that she’s wearing leggings, and her shins are covered in cloth wrap that matches the skirt. The detailing in the wrapping is kinda cool because it does look like random shin wrappings; they’re not even symmetrical which makes it look a bit more authentic. Lastly, her boots…shoes are okay. There’s really nothing special there other than the tops are moveable, but there’s not much detailing to them.

Overall, the paint seems to be pretty well done.  I do believe that the design on her torso, under the chest plate, is printed onto the figure because the lines and details are too precise to be paint, but it’s not super obvious because the skirt covers it most of the time. There are a few places where the paint doesn’t quite fill in properly, but it’s not super noticeable. Then there are other places where the paint goes over the lines, but again it’s either well-hidden or so minor that as long as you’re not looking at it with a microscope you won’t notice. I will say that it’s weird that there are two different shades of metal grey used on the figure, her chest, helmet, and shoes are a darker grey than her arm brace and metal bits on her belt. Her only accessory is her hammer, Myeuh-muh (Mjölnir), which is pretty cool. There’re little etchings in the molding that simulate the knot designs on the hammer, and there’s groves in the handle too. You can also have her hold it by the strap or the handle.

So I wanted to read more Marvel comics other than the ones Ethan was suggesting, even though they were good, I wanted to find something for myself. I was pushed toward the current Thor series after one of the publicity blunders Marvel faced earlier in the year. After doing more research into what happened and who said what, I realized that the whole thing was blown out of proportion and that the company wasn’t trying to be this bad guy people were crying over. So I decided that I would definitely start reading more Marvel comics, starting with one of their more popular series The Mighty Thor with the new female Thor and I fell in love instantly. When Ethan found out what figures were in this line, he immediately told me that female Thor would be included and I proceeded to make inhuman noises for about five minutes then begged him to keep a look out for her. After a few weeks of searching he found her in the bottom of a random cart in Walmart full of older Marvel Legends in an aisle completely away from the toy section. I’ve been happy with her ever since! She’s an awesome figure based on a cool character design from a comic that I’m enjoying way too much. Also she looks fantastic on my bookshelf!