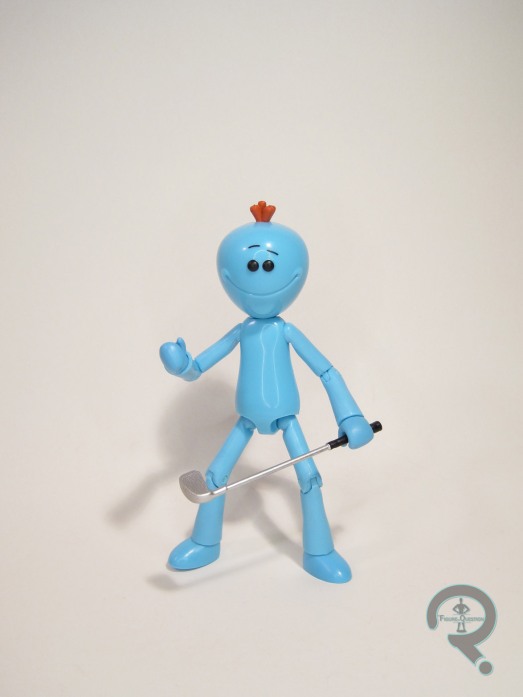 I’ve touched on Rick and Morty once on this site before, in fact in another Mr. Meeseeks review.  It’s certainly an odd show, but it amuses me.  There’s a bunch of associated merchandise out there to choose from, especially if you’re an action figure fan like myself.  Funko of course did their usual Pops and Mystery Minis, but there’s also a proper action figure line as well, and my personal favorite character (or characters, I suppose), Mr. Meeseeks was included amongst the initial assortment. 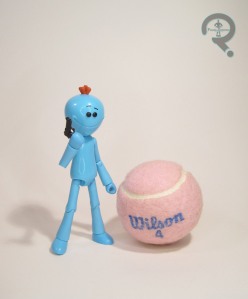 Mr. Meeseeks was released in the first series of Rick and Morty figures from Funko.  He represents Jerry’s first Meeseeks from “Meeseeks and Destroy,” which is the most prominent Meeseeks by far.  The figure stands just shy of 6 inches tall and he has 17 points of articulation.  His sculpt isn’t a straight recreation of the design from the show, largely due to the design not really being meant for three dimensions or adding things like articulation. From the outset, there were some compromises that needed to be made.  On top of that, Funko looks to be trying to create some sort of line-wide style for the Rick and Morty figures, at least partly influenced by other media adaptation lines from the ‘90s and such.  It’s not too far removed from the already established Rick and Morty style, and the figure still has all of the characteristics necessary for selling this figure as a Meeseeks 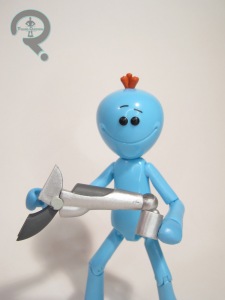 figure.  The head in particular is a solid recreation of the show design.  The articulation is rather obvious, but it’s not particularly obtrusive, and it has a pretty good range of motion, which is the important thing here.  There’s not actually much paint on this figure.  The vast majority of the figure is just molded in light blue plastic, with paint limited to the head, specifically the eyes, brows, and hair. The application is all clean, but that’s pretty easy to do when there’s this little to apply.  Meeseeks is packed with a golf club (which you gotta choke up on, while remembering to square your shoulders; you know you gotta do both) and a hand gun.  His hands aren’t exactly designed for optimal grip on either, but it’s not like he can’t hold them at all.  It might have been cool to get an extra head or two to allow for multiple Meeseeks to be depicted, but it wouldn’t surprise me if Funko was holding out to release more variants down the line.  Meeseeks is also packed with the leg of the Build-A-Figure Snowball.

Despite not being a fan of the show herself, Super Awesome Girlfriend got me this figure, just like the last one.  We had stopped to look for the Solo product, and I didn’t find much, so I guess she took a bit of pity on me and bought me this guy (it probably had something to do with me only being out that day because I was doing some volunteer work with her, as well).  I don’t know that I’ll be going all-in on this particular line, but I do quite like this particular figure.