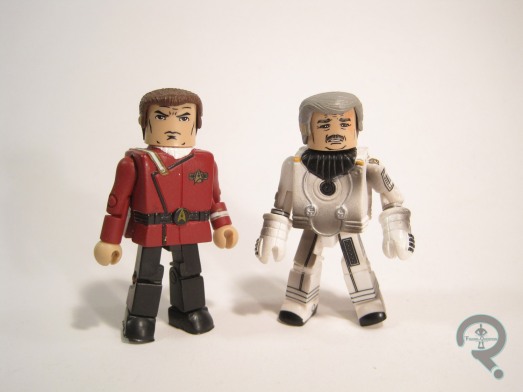 The first three series of Star Trek Minimates were entirely based on The Original Series’ three season run.  While that was quite alright for the first two, there was no denying that by the time of Series 3, they were starting to run of fumes.  As such, DST expanded the reach of the line, turning it to focus more on the other shows and films.  Today’s set comes from one of the movies, funnily enough, one of the ones starring the original crew.

Admiral Kirk and Duty Uniform Scotty were released in Series 4 of Star Trek Minimates.  This pair were supposed to come from The Wrath of Khan, considered by pretty much everyone to be the best of the Trek films.  Given that these were the only TWOK-based figures in the line, the pairing does seem slightly…odd.  There was a variant version of this set, which featured Scotty in his maroon dress uniform. 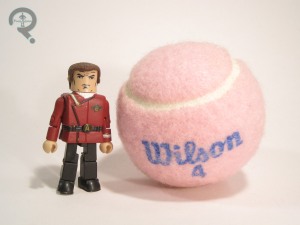 This is the second time I’ve looked at a movie Kirk Minimate, but chronologically the first of the two.  His later ‘mate was based on his jacketed away team look from later in the film, while this one is based on his standard uniformed look.  The figure is built on the standard ‘mate body, and as such stands about 2 1/4 inches tall and has 14 points of articulation.  He has add-on pieces for his hair and jacket, both of which were new to this particular figure (though the hair has seen subsequent re-use).  The jacket works quite nicely.  The details are pretty sharp, and it matches up well to the movie.  The hair is less impressive.  Admittedly, Shatner’s hair from this period has always been slightly difficult to pin down, but this one just seems to miss it.  Kirk’s paint is reasonable enough.  The uniform in particular captures the scheme seen in the movie, and the application is mostly pretty clean.  The face doesn’t have much Shatner to it, I’m afraid.  I think the later attempt had it down a bit better.  Also, the tampo of the face seems a bit too high on the head block as well.  Kirk was packed with a movie-styled phaser. 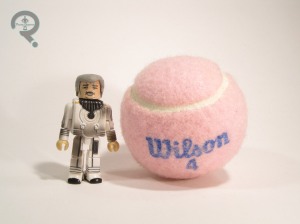 Scotty’s place in this set is definitely weird.  I mean, the guy’s important in the movie, but producing him over Khan, or even Spock, McCoy, or David Marcus, all of whom are more pivotal to the film, seems sort of strange.  I guess maybe they wanted a variety of uniforms?  But, of course, even then, with the variant set, that excuse was lost.  I’m back to no idea again.  This is the standard release of Scotty, which is in his slightly more exciting Engineering uniform, which is what he spends most of the movie wearing.  Also, since these were one of the few designs to stick around from The Motion Picture, he’ll also fit in with Series 5’s Decker and Illia, so that’s cool.  He’s got sculpted add-ons for his hair and chest piece.  Both of them are definitely well handled pieces.  Scotty’s hair in particular is a much better match for Jimmy Doohan’s style from the movie.  The paintwork on Scotty is pretty solid, apart from one slight issue.  See that slight pink discoloration on his forehead?  Well, that’s *supposed* to be blood from an injury, but it seems the wrong color was used, making it look more like there’s just a slight flaw in the plastic.  Beyond that, it’s actually pretty decent work, though, with the details of his uniform being quite well-defined.  The burn damage to his suit is also pretty awesomely done, and keeps him from looking too boring.  Scotty is packed with a pair of engineering gloves to swap for the standard hands.  Shame we never got Spock to steal them from him.

I was always a little behind on collecting this line, so I didn’t get this set new.  Instead, I picked it up a little after the fact from the Record & Tape Traders in the town where my family vacations.  They’d been marked down, so I ended up with a full Series 4 set, this pair included.  They’re both okay Minimates, but neither’s really much to write home about.