Okay, I just really feel the need to start this review by pointing out, for the sake of posterity, that every single instance of Otto Octavious’ super-villainous name on the packaging of this figure simply refers to him as “Doc Ock”…which, uh, well, it isn’t actually his name.  It’s the nickname he got from Spider-Man, who I suppose I should be exclusively referring to as “Spidey” henceforth.  Was there some sort of Ock-related re-branding that I haven’t been privy to, where he dropped the proper form of his name.  Or does he just feel that “Doc Ock” better instills fear?  Who knows for sure?  Well, Hasbro, I guess, but they aren’t returning my phone calls.

Doc Ock is the figure 1 in the SP//dr Series of Marvel Legends.  Okay, that’s kind of a lie; he doesn’t get a number like the other six figures, since he doesn’t actually contribute to the Build-A-Figure.  But, he’s the first figure pictured in the line-up, so I’m giving it to him.  This is Ock’s first proper Legends figure since back during the Toy Biz days (though Otto’s gotten one in the mean time, under the guise of Superior Spider-Man, or “SpOck” as I assume he’d be called now).  That figure was one of TB’s stronger offerings during their tenure, and Hasbro undoubtedly wanted to put off following up on it until they were sure they could properly contend.  The figure stands 6 inches tall and has 39 points of articulation.  He’s a head-to-toe new sculpt, and I’m doubtful we’re going to see much of this one re-used, unless Hasbro’s planning to do a bunch of Ock variants.  The sculpt is definitely a top-notch effort, rivaling Toy Biz’s attempt from all those years back.  I think I still prefer that old head sculpt, but I otherwise prefer the movement and build of this guy, and it’s not like this one’s got a bad head sculpt at all.  Like the Toy Biz version, the goggles are a separate piece, with a fully detailed set of eyes beneath them, but they remain non-removable.  The tentacles are a sore point for a number of collectors, and I understand why.  The static nature of the actual tentacle sections is definitely frustrating, making the posablity and playablity of the figure somewhat restricted.  I prefer the general design of these to the more organic designs of the Toy Biz figure, but I can’t help but wish for an Ock with a set of classically-inspired and properly-jointed appendages.  Or at least a couple of cut joints…just something to add some extra variety to the poses of them.  As it stands, there are two different configurations of arm, which you can swap around for some slight versatility.  It’s better than nothing, I guess. Ock’s paintwork is fairly straight-forward.  It’s clean, it’s bright, it’s attractive.  It could use a bit more accent work, I suppose, but it definitely works as-is.  Ock includes no additional accessories or Build-A-Figure piece, but given the size of the included appendages, as well as the all-new sculpt, Ock doesn’t feel light.

Doc Ock’s Toy Biz figure was one I enjoyed immensely back when I was collecting that line, but when I got out of Legends, because I’m not a *huge* Doc Ock figure, I foolishly parted with him.  I’ve been regretting it since.  So, I was happy to see Hasbro finally step-up to the plate and offer one of their own.  He’s not without those flaws, and I will eternally hope for better appendages down the line, but he’s still a very, very strong take on the character, and I’m happy to have another Spider-rogue on the modern Legends shelf.

I purchased Doc Ock from my friends at All Time Toys.  If you’re interested in buying him or other Legends figures, or are looking for other cool toys both old and new, please check out their website and their eBay Store. 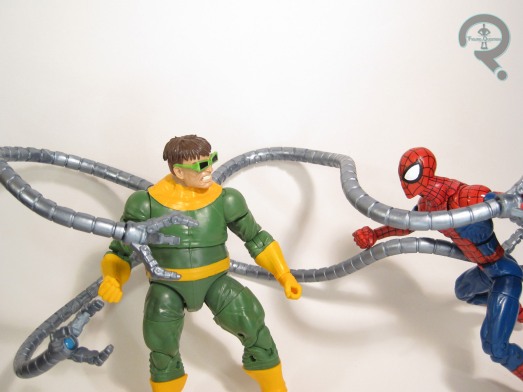