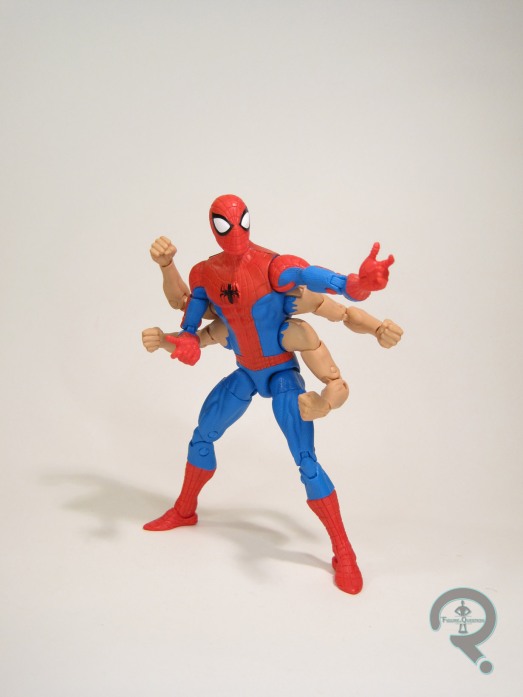 “Hoping to cure his spider powers, Peter Parker drinks a special mixture and wakes up with four extra arms.”

Let that be a lesson to you kids: if you drink special mixtures, you might just wake up one day with four extra arms.  And then what are you gonna do?  Hide your four arms in your pants when your Aunt May comes around?  Doesn’t that sound awkward?  It sure does!  The message is clear: don’t drink strange mixtures!

Vague sort of PSA thing aside, the six-armed variant of Spider-Man is something of a classic one.  First introduced in the comics in the ‘70s, and then brought to a new audience courtesy of the ‘90s cartoon, the Six-Armed Spider-Man asks a pretty simple question: what if Spidey had eight limbs, you know, like a spider?  The answer is, unsurprisingly, extra toys to sell. 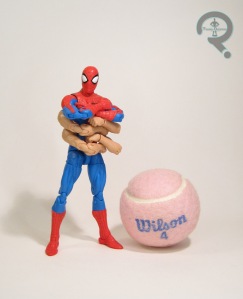 Spider-Man is the first figure in the Kingpin Series of Marvel Legends, the first Spidey-themed assortment of 2019.  He’s one of two Spidey variants, and definitely the most classic figure in the line-up.  He’s also the only one you don’t need to complete the Kingpin figure, but let’s not hold that against him.  The figure stands 6 1/4 inches tall and he has a whopping 58 points of articulation.  All those extra arms are certainly good for something.  Of course, it’s a bit of give and take on the articulation.  Though all of the arms sport the standard articulation, the figure’s torso lacks any sort of movement.  While I can understand the complexities of getting a working ab-crunch in with all of the arms, the lack of a waist joint seems particularly egregious.  There’s no practical reason for that joint to be missing, so I can only assume it was a cost saving choice.   Fortunately, the rest of the figure is able to somewhat pick up the slack, and ultimately the lost posability doesn’t hold the figure back *too much*.  This Spider-Man breaks from the last several mainline variants of Peter by being built on a body other than the Pizza Spidey body.  Upon first glance, I thought he might be an all-new sculpt, but a little bit of double-checking shows that he’s actually re-using the vast majority of the ASM2-based Spider-Man from the Ultimate Green Goblin assortment.  The figure was well-regarded when it was new, and a lot of people were content to have it as their standard comic Spidey, but with the introduction of Pizza Spidey the next year, the ASM2 mold was kind of abandoned.  That makes its use here somewhat odd.  I can only guess it’s one of two things.  Either they developed this figure shortly after the ASM2 figure’s release, before it was clear the ASM2 aesthetics were going to be dropped, and just sat on the mold for a while, or they opted for this mold because of its sculpted weblines, allowing for another bit of cost-cutting.  I’m leaning more towards the latter.  Whatever the reason, it means this sculpt doesn’t quite jibe with the rest of our Spidey variants, much like last year’s Spider-Ham.  I will say that at least the weblines are recessed on this sculpt (in contrast to the raised ones on Spider-Ham), so at least giving him painted weblines on your own won’t be quite as hard.  He does also benefit from the ASM2 figure just being a good figure in its own right, and by extension making this one very playable himself.  Even the newly sculpted torso and arms are pretty solid, with the detailing on the torso matching well with the rest of the figure, and the layout of his arms being such that he can actually let them rest pretty well by his sides.  I was anticipating it would be a lot harder to work with them than that.  I was also pleasantly surprised to find that the shoulders on the extra arms have sculpted torn sleeves; I expected those to just be painted on.  The paintwork on Spidey is fine.  It’s clean.  It’s bright.  It’s missing the weblines, of course, but I knew that going in. I’m still frustrated by those red pegs on the underside of his arms.  Certainly there’s some sort of fix they can come up with for that, isn’t there?  Spidey is packed with no accessories.  At the very least, I would have liked to see some extra hands.  At least with all the arms in the package, he doesn’t look too light.

I’m gonna be honest, I was prepared to hate this figure.  After being so letdown by the Spider-Ham figure, I saw a lot of the same flaws on this one when its prototype was shown off.  I mostly just bought him because I was getting the whole set.  Then I actually opened him up and played with him a bit, and I realized I really didn’t hate the figure at all.  Sure, there are some definite issues.  I don’t like seeing the articulation cut, and I hope the unpainted weblines aren’t a trend that continues.  Beyond that, though, I found this figure to be a lot of fun.

Six-Arm Spider-Man was purchased from All Time Toys, who got me this whole set to review.  He’s currently still in-stock at their webstore.  And, as always, if your looking for other Legends or other toys both old and new, please check out their website and their eBay storefront. 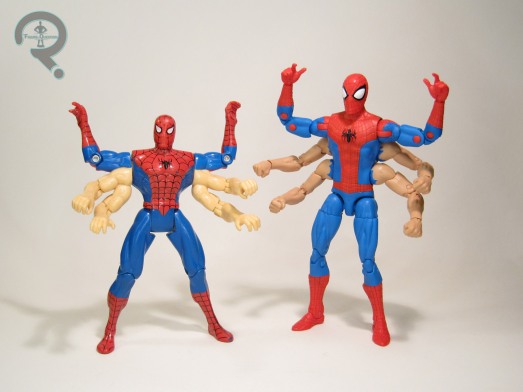