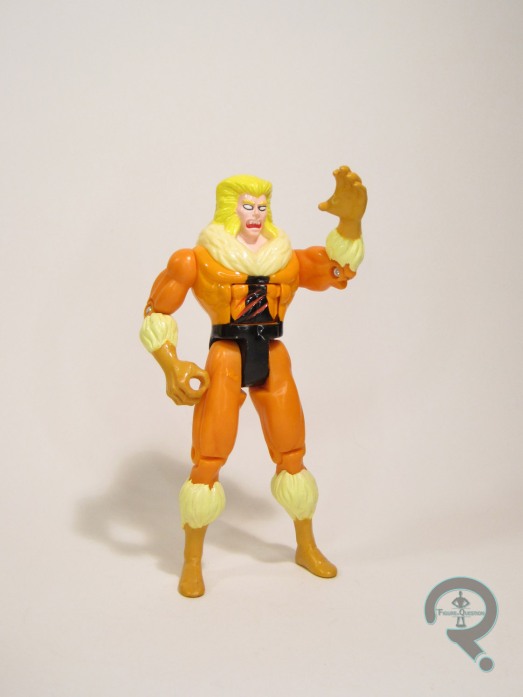 “Sabretooth is Wolverine’s greatest enemy. Both are products of the Top-Secret Weapon X program. But instead of using his super-sharp claws and fighting abilities for good, Sabretooth became the Evil Mutants’ master assassin! Sabretooth has the same powers as Wolverine, including a mutant healing ability. What makes Sabretooth so dangerous is the fact that he’s even more savage in battle than Wolverine! When the two of them fight, it’s anyone’s guess who will win.”

Despite his connection to Wolverine, Victor Creed, better known as Sabretooth, first appeared as a foe to Iron Fist.  Like fellow X-foe Mystique, he was an example of long-time X-scribe Chris Claremont spreading the love so to speak, and introducing characters he intended to use in X-Men in some of his other books.   Whatever his source, he’s been an enduring foe for Wolverine and the X-Men, and was at the height of his popularity alongside them in the ’90s, when he got his first action figure.

Sabretooth was released in Series 2 of Toy Biz’s X-Men line.  He’s based on Sabretooth’s original John Byrne-designed costume, which, interestingly enough, Sabretooth had just ditched in the comics at the time of this figure’s release.  The early line was kind of plagued with things like this, which is why characters had a tendency to show up a second time pretty quickly (Sabretooth’s second figure would arrive just three series later).  The figure stands 5 inches tall and has 8 points of articulation.  Sabretooth lacked neck articulation, a surprisingly common phenomenon in the early years of the line.  Unlike other figures this happened to, Sabretooth doesn’t really have any specific gimmicks preventing a neck joint from being added, so I guess it was just a design thing.  Whatever the case, it’s a bit limiting on posing.  Sabretooth’s sculpt was unique to him.  It’s okay, but not really anything to write home about.  It leans closer to the weaker of the Series 1 sculpts than it does the stronger Series 2 sculpts.  The details are rather soft, especially on the face, the hair is rather oddly shaped, and the proportions are really on the scrawny side for a Sabretooth figure.  His paintwork is pretty basic; the standard colors are all handled decently.  The two shades of yellow for the fur and his hair are kind of close to each other, meaning they kind of blend together and look kind of odd.  Sabretooth was packed with this weird sort of claw thing to hold.  He also had an action feature, where the front plate of his stomach could be flipped back and forth.  One side is clean, while the other has claw marks, thereby simulating his healing factor.

By the time I was collecting, this figure had vanished from shelves, replaced by his more cartoon-indicative second figure, so that was the one I had.  I picked this one up a couple of years ago second hand.  Part of his appeal was being the first copy of this guy I’d seen without horrible paint scraping on the eyes.  He’s not really a great figure…or even a particularly good figure.  I guess if you really like his original costume, that’s a plus, but it’s not even the best version of that costume on the market.