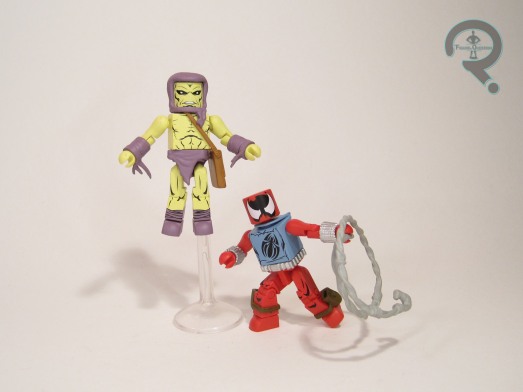 Something new and something old.  Not an uncommon theme when it comes to Minimates, especially Marvel, where there’s a definite need to refresh some looks every so often, so as to both make them available for a newer audience and update some things to fit in a little better with more recent releases.  And hey, if a new character comes along for the ride, that’s not so bad either, is it?  So, with that in mind, let’s look at Carrion (the new) and Scarlet Spider (the old).

Carrion and Scarlet Spider were part of the second to last TRU assortment of Marvel Minimates, Series 24.  The assortment was a sort of a mixed bag, with each set being a somewhat contained theme.

He’s not the most well-known of Spider-Man’s foes, but Malcolm McBride, the second incarnation of Carrion, is a sensible choice for a Minimate, especially given his pack-mate.  The original Carrion (who had more or less the same appearance as this figure) was a defective clone of Miles Warren, better known as the Jackal, the mastermind behind the infamous “Clone Saga.”  Malcolm was also a prominent player in “Maximum Carnage,” meaning this figure fits right in with the Maximum Carnage-themed Series 76, so he’s just all around a pretty sensible choice.  Carrion is built using seven sculpted add-on pieces for his hood, pouch, loincloth, and two pieces each for the wraps on his arms.  The upper and lower arm wraps are re-used from Heihachi and and Jack Skellington, respectively, and the pouch is Kim Bauer’s purse from 24, because Carrion is super down for taking fashion advice from the similarly accessorized Green Goblin.  The hood and loincloth both appear to be new pieces, and they work well enough, though the hood is a little restricting to the head movement.  Carrion’s paintwork is clean and sharp, though perhaps not the most eye-catching look.  Pale yellow and purple isn’t a particularly appealing palette, but it’s accurate to the character’s comic appearance, so one can hardly fault DST for that.  The linework is actually quite nice on this figure, and does a solid job of capturing that early ’90s style of illustration.  For accessories, Carrion is somewhat on the light side, with only a flight stand and a basic display stand.

Carrion’s great and all, but the main reason for most people to buy this set is Ben Reilly, aka the Scarlet Spider.  He wasn’t a stranger to Minimates, with his Spider-Man costume cropping up first back in Series 10.  A proper Scarlet Spider followed in 2007, as an FYE exclusive of all things.  A decade later, he finally got an update.  Despite his predecessor making use of no add-ons, this Ben Reilly has six of them, for his hood, belt, webshooters, and ankle pouches.  All of the pieces are re-used from elsewhere, and they for the most part do their job pretty much perfectly.  The only slightly off parts are the ankle pouches, which are actually knife sheaths with nothing in them.  There exist non-sheath ankle straps, so why these parts were used is anyone’s guess.  Ultimately, though, they sell the look well enough, so I can’t complain too much about their use.  Scarlet Spider’s paintwork is actually quite impressive.  In the comics, he was frequently shaded in a very dynamic fashion, and that’s the look this particular figure tries to capture, at least on the figure’s mask.  It’s a cool looking effect, and the sort of thing that really only works on a Minimate.  Scarlet Spider is packed with an alternate head and hair for an unmasked Ben Reilly (the first proper Ben Reilly head we’ve ever gotten), a webline, and a clear display stand.

After a bit of a hiatus from Minimates, I picked this set up last year, at the very beginning of Toys R Us’s shut-down process.  It was actually a set I was looking for, which I was only able to find once TRU started pushing things out from their warehouses.  Carrion wasn’t really going to be at the top of anyone’s list, but it’s always nice to get a new character, and DST did a respectable job of translating him to ‘mate form.  Scarlet Spider was in desperate need of an update, and this figure really delivered well on that.  He takes every aspect of the old figure and makes it better, and results in a generally far more enjoyable figure.