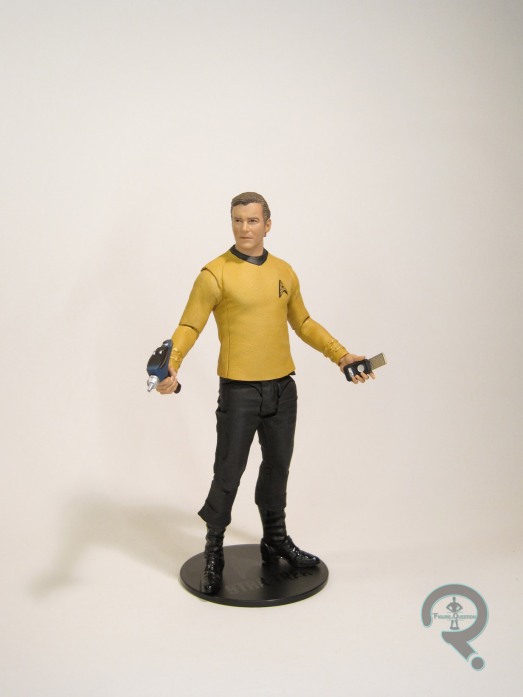 The Star Trek toy license has been through a whole lot of hands over the years, and seems to get passed along with this sort of regularity.  Aside from Mego (who held the license in the 70s) and Playmates (who held it in the 90s), nobody has been able to hold it for long.  This has become especially apprent in recent years.  In just the last decade, it’s been held by Playmates, Hasbro,  Mattel, and now McFarlane Toys.  And, McFarlane is doing what every company does when they get the license: making a Kirk. Well, let’s see how this one turned out.

Captain Kirk is one of two launch figures for McFarlane’s new Star Trek line (the other is the similarly popular toy-choice Picard).  He’s based on his classic series appearance, and will be joined in the second series by a matching Spock.  The figure stands 6 3/4 inches tall and he has 26 points of articulation.  His construction and the implementation of his articulation is pretty much the same as McFarlane’s other recent figures in this scale, which is to say actually not terrible.  They do seem to be learning how to actually work the articulation into the sculpts without it looking awful in some spots, which I count as a plus.  That said, the range of motion on the joints could still use some work, because even with all of that articulation, he’s not getting into much more than a fairly basic standing pose.  Granted, for Kirk that’s not the end of the world, but it does impact how he interacts with at least one of his accessories.  Kirk’s sculpt is definitely the strongest part of the figure, with the head sculpt really just being the best single thing about it.  Shatner’s likeness is a rather difficult to capture one, but I think this is the best classic series Shatner we’ve gotten in plastic form.  It’s not perfect from every angle, mind you, but it’s good from most, and that’s nothing to slouch at.  The body sculpt is pretty solid as well, with a decent match for Shatner’s proportions, and a nice variation of textures.  In particular, we actually get a texturing on the tunic, like the real thing, rather than the totally smooth look we usually get on classic Trek figures.  His hands are specifically sculpted to hold his included accessories, but they’re realistic looking hands.  Kirk’s paintwork is decent overall, with one slight caveat on my figure.  The base application is clean and bold, and looks fairly realistic.  I particularly like the really glossy boots.  Those are always fun.  The face is handled using the printing set-up that’s all the rage these days, and would be really nice if not for one of his eyes being slightly askew.  It’s very slight, and not enough to ruin the figure, but it’s just off enough for me to notice.  Kirk s packed with his phaser, larger rifle, an extra right hand for the rifle, a communicator, and a display stand.  The display stand makes me laugh, because it’s actually held in the package by scotch tape.  Not plastic tape, like you see on most figures (and every other accessory in this package): regular, foggy scotch tape, like off someone’s desk.

I’m apprehensive pretty much any time a new Trek line is announced, because they’re all pretty much doomed to failure at this point.  Admittedly, I’m not sure this one’s going to break that mold, because Todd doesn’t have the best track record for depth in his lines.  However, I saw this figure in person while out hunting for some other figures, and I kinda liked him.  He’s actually not a bad figure.  I don’t know that he breaks the mold or anything, but he’s the nicest Kirk I’ve owned, and he looks pretty sweet with my AA Gorn figure. 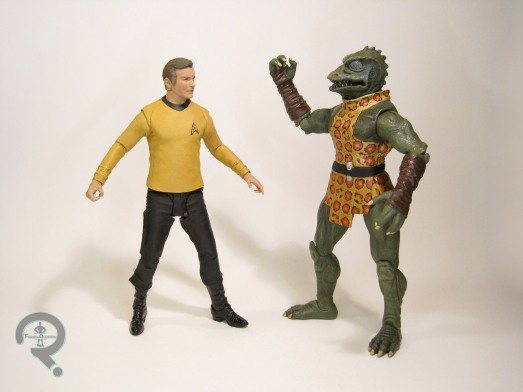