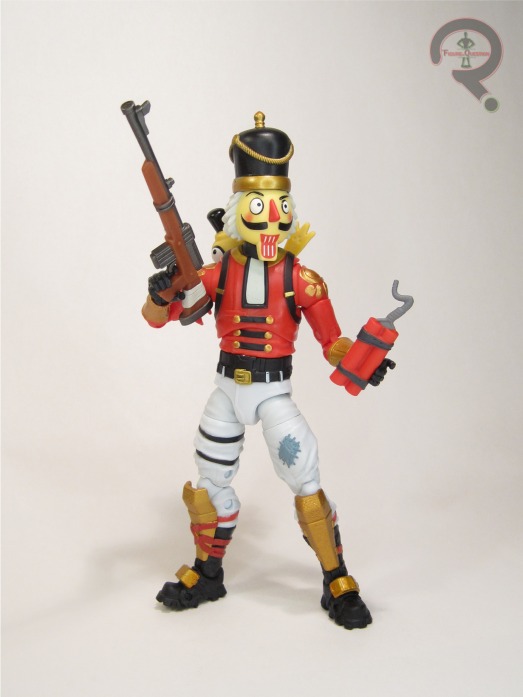 Remember when I was reviewing all of those Fortnite toys…wait, I did this yesterday, didn’t I?  Sorry, I got confused in all of the holiday chaos.  Did I say holiday chaos?  Obviously, I must mean holiday joy, for these holidays are a joyous time, are they not?  Where am I going with this?  Truth be told, I don’t really know.  I’m gonna level with you guys, this is actually the second review I wrote for today, because I just decided that the last one wasn’t good enough…for this year.  Odds are good on it being good enough for next year, because I foresee future Ethan being really down for not having to write another review.  To celebrate Christmas this year, I’m taking a look at something of an old-standing Christmas tradition.  No, not Fortnite; we’re not there quite yet.  No, I’m talking about Nutcrackers, a German symbol of goodluck originating in Germany in the 17th Century, and popularized by ETA Hoffman’s story “The Nutcracker and the Mouse King” and its subsequent Tchaikovsky-composed ballet adaptation “The Nutcracker.”  They have now become quite the American tradition, but we Americans managed to do our comically missing the point thing, which is why most nutcrackers nowadays don’t actually function as nutcrackers.  Today’s offering really isn’t much different. 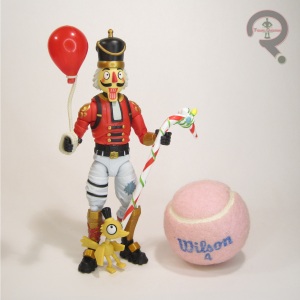 Crackshot is his own solo release in the Fortnite: Legendary Series line-up, available exclusively at Walmart.  He started hitting shelves just before Black Friday, which seems pretty timely.  I imagine he won’t stick around for long past December, but time will tell.  The figure is based on the similarly holiday-themed skin from the game, which was available during the Christmas season in 2017.  Like the two prior Legendary Series figures I’ve looked at, Crackshot was also added to the smaller scale line around the same time as his larger figure, however, somewhat amusingly, this figure is actually the cheaper option of the two.  The figure stands about 6 1/4 inches tall and has 40 points of articulation.  His articulation scheme is pretty much the same as the other two, which is a definite plus.  Keeping the positives of the Toy Biz Legends without the laundry list of negatives is alright by me.  Crackshot’s sculpt appears to be a fairly accurate recreation of his game model, for better or for worse.  That means that he ends up sharing a number of parts with this line’s version of Jonesy, upon whom most of the skins are built.  This means that he’s got the plates on his shins, plus some of the wrappings, and the patch on the pants, which do take you out of the nutcracker appearance a little bit.  That said, I was surprised to see that he actually got uniquely sculpted elements for his shoulders, given that they really are just painted on the skin in the game.  It gives him a nice extra bit of pop.  The star piece of this figure, of course, is the head, which manages to get that classic nutcracker design down pretty darn nicely.  Like the others in the line, has has multiple faceplates, three of them in this case, each displaying a different expression.  There’s angry, happy, and neutral.  Neutral’s destined to get the most use, but all three are fun, and I appreciate that they actually sculpted three different expressions for the eyebrows.  I got a lot more fun out of the angry one than I expected to.  The paintwork on Crackshot is pretty respectable.  He’s colorful and eye-catching, and gets those proper holiday colors down right.  Everything is applied cleanly, and he’s even got those signature rosy cheeks airbrushed on, consistently across the three faces, no less.  In addition to those three faces, Crackshot also includes the Hunting Rifle, the Bird Shot back bling, the Candy Axe pick axe, a bundle of dynamite, and a balloon.  It’s a pretty fun selection of extras.

I fully intended to run a different review today.  I really did.  I took the photos, and wrote it, and everything.  Then I found this guy at Walmart, and he jumped the queue.  I’ve always had something of a soft spot for nutcrackers, so the idea of actually making a proper action figure based on one is right up my alley.  This guy’s a great seasonal piece, and it definitely getting added to my holiday decorations, no doubt.